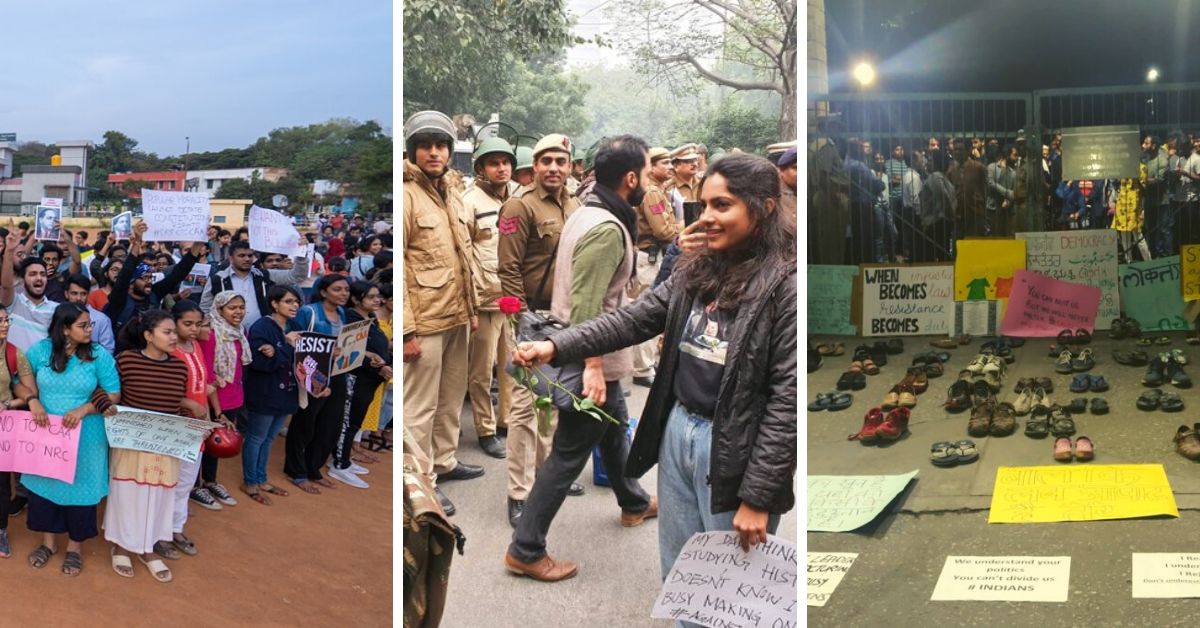 “I remember her looking to me and saying ‘look how many people are here, I think India is going to be alright’.”

Democratic societies rely on the free exchange of ideas and information, which, in turn, creates ample room for disagreements, discussions and debates.

While it is natural for people to take sides and ferociously defend their views, it is imperative to remember that at the end of the day, we must strive to put humanity above everything else.

In India, as protests around the issue of the Citizenship Amendment Act (CAA) continue, stories of humanity and compassion, amidst emotions like anger and resentment, are also a strong part of the narrative.

The Citizenship (Amendment) Act seeks to fast track Indian citizenship for Hindu, Sikh, Parsi, Buddhist and Christian immigrants from Pakistan, Afghanistan and Bangladesh, who have lived in India without documentation. The Act only applies to those who entered the country on or before December 31, 2014. They will be granted fast track Indian citizenship in six years. So far, 12 years of residence has been the standard eligibility requirement for naturalisation.

Protests have broken out across India in opposition to the Act, some of which saw intense violence. Protestors allege that the Act discriminates against Muslims and sets a religious test for citizenship.

Here are some inspiring tales of humanity amid the protests.

Jabarjang Singh was on his way to Odisha to oppose the demolition of a Gurudwara when he learnt about the student protests against the CAA in Delhi. The news that there were clashes between the police and the students led him to change his plans at the last minute.

Instead of Odisha, he headed to the troubled areas in Delhi – to distribute free food to the hungry.

“I thought it is wise not to go there (Odisha), and express solidarity with the students instead. When I saw videos of beatings and heard some students lost hands and eyes, I thought it better to serve them than to go to the Gurudwara,” Singh told VICE.

Like Singh, an NGO Khidmat Foundation served free biryani, biscuits and tea to the protestors.

“If you stand by their side today, then tomorrow, when they get busy in their lives and professions, they will remember this and take part in humanitarian efforts. That is something we need the most today,” said a member of Khidmat to The Quint.

On December 19, Section 144 was imposed in Bengaluru in anticipation of protests around the CAA. According to the section, the assembly of four or more people in an area is an unlawful act.

Despite this, on December 20, citizens assembled in large numbers at the Sir Puttanna Chetty Town Hall – a large building in the center of the city. As the evening stretched on, a unique gesture by the women in the crowds was later hailed by social media as a novel and non-violent precaution against a police crackdown the protestors assumed would occur at any minute.

According to Section 46(4) of the Criminal Procedure Code, 1973, women cannot be arrested before sunrise and after sunset (in exceptional cases, the prior permission of the Judicial Magistrate is mandatory). So the women in the crowd surrounded the men, giving everyone a small buffer against the police.

“While mainstream Bollywood is busy objectifying women in movies, real women are busy saving men on the streets,” wrote Facebook user Shubham Negi whose post about the protest went viral in minutes.

3. One Girl, One Police Officer and One Rose

As violence during the CAA protests in Delhi continued to widen the rift between the protestors and the police force, a simple gesture offered a brief pause.

In a photograph captured by journalist Saurabh Trivedi, a young girl is seen offering a rose to security personnel, while the recipient and his colleagues look on with faint smiles. Needless to say, the photograph went viral.

In a separate incident, a group of youngsters repeated the same gesture towards the department, proving that kindness can be a true ice-breaker, even in the most turbulent of times.

In yet another heartwarming gesture of solidarity during the protests in Delhi, people from different faiths formed a human chain outside the Jamia Millia Islamia university gate, while their Muslim brethren offered Namaz (prayer).

#WATCH Delhi: Students and other people of Muslim community offered Namaz outside the gates of Jamia Millia Islamia university. Members of other faiths formed a human chain around them. pic.twitter.com/FEPZOqI1MX

The video, uploaded by ANI, has so far received approximately 11,000 likes and been retweeted more than 3,000 times.

As the police in Uttar Pradesh, Delhi and Karnataka cracked down on protestors with a heavy hand after multiple situations (and mutual suspicions) quickly spiralled out of control, the Mumbai city police force set a wonderful example for their colleagues by ensuring a peaceful protest.

A team of just 500 policemen provided security to over 25,000 protestors at the August Kanti Maidan in Marine Lines.

A two-level check system was implemented. The department came prepared with all the precautions including CCTV vans, anti-sabotage unit, special branch, personnel from police stations and dog squad. This was to ensure no one with any vested interests could trigger violence amidst the peaceful protests.

In return, the citizens took to social media handles and thanked the Mumbai police for a systematic and non-chaotic protest.

On the night of December 15, after clashes broke out between police and students protestors, the administration of the Aligarh Muslim University announced its closure till January 5.

Knowing that students would board trains from Tundla railway station (on the Delhi-Kanpur line), the railway staff rose to the occasion. Within six hours, more than 77 trains were kept ready for the students to avoid any inconveniences to the reserved passengers.

In a Facebook post, Sanjay Kumar, an Indian Railway Traffic Service official, thanked the team’s efforts to ensure that more than 10,000 students were able to reach home, safe and sound.

“Thanks to our cleaning staff who volunteered to help in crowd management. Kudos to the dedicated team of Commercial, Operating, RPF, GRP and City police. All the three Civil Services – IRTS, RPF and IPS worked in proper sync. Indian Railway is the lifeline of India and it’s the duty of everyone to protect Railway property,” wrote Kumar.

Circumventing Section 144 and the orders of IIM Bangalore’s administration, students of the premier management institute came up with a unique way to express their opinions on the CAA.

They staged a shoe satyagraha inside the campus!

One side of IIM-B are students , the other side are cops. Professors and students keep their footwear outside the gate as symbolic protest against Sec 144. Cops told them If you step out we'll arrest you. Hence they remain inside and footwear out! pic.twitter.com/TaRhDsBH5b

Student groups of less than four took turns to place the banners on the ground along with their shoes. Some even kept flowers to symbolise peace.

Thanks to the peaceful movement, the police stationed outside the campus did not have to intervene even once.

8. Today Also We Are With You: Bhiwandi Police to Protestors

“Aaj bhi hum aapke saath hai….Please make way for our police delegation and let them pass. Once they do, I request everyone to disperse to their ‘mohallas’ without causing any disturbances. Thank you,” said Rajkumar Shinde, Deputy Commissioner of Police in Maharashtra’s Bhiwandi area.

Shinde was addressing a massive gathering, estimated at over 100,000, standing atop an autorickshaw, and his words worked! The fidgety crowd that was earlier raising slogans patiently heard him out, cheered and applauded before dispersing.

Bhiwandi, a city in Thane, is infamous for the communal violence it witnessed between the 70s and 80s. Hats off to Shinde for handling a sensitive situation in an incredibly adept manner. As a news report put it, he truly came, saw— and with a simple gesture—”conquered” a massive crowd!

9. Bengaluru Woman Lost in a Crowd Finds A New India

On December 23, armed with a placard that read ‘I am a child of two religions,’ Rheea Rodrigues Mukherjee participated in one of the most massive protests Bengaluru has seen so far.

At some point, she lost herself in the crowd, but in a beautiful Facebook post that has been liked more than 6,000 times, she writes about how in this short period of time, she found a different side of India–one that was mindful, helpful and protective.

“A man took notice, and led us, he screamed at the top of his lungs “make way for the ladies” over and over again, and walked us, everyone made way, not one of us felt unsafe. Imagine being in the middle of thousands of Indian men and not being shoved, touched, or violated in any way.”

10. Artists Give Creative Spin to Protests, While Celebrities Urge For Peace

When words fail, art speaks and bridges the gap between what can and cannot be said.

Exemplifying this, several artists and creative minds are using their unique talent to spread awareness, mobilise, and lend the protests and discussions some colour.

Whether it is making creative posters, songs, and even WhatsApp forwards, social media is flooded with fine examples of artworks that are making a difference. Here are two posters:

The fact that everyday heroes emerge, no matter where or when across the nation, to ensure there are small silver linings to dark clouds is amazing to see indeed. More power to them!