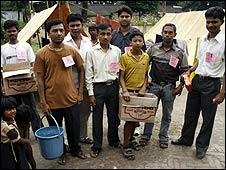 They are afflicted with polio and are disabled. Yet these two casual labourers and friends – Amrendra Shukla and Ravi Paswan – have saved more than 40 people from getting swept away in the disastrous floods of Bihar. The old adage “Where there’s a will, there’s a way” has never been more beautifully depicted as by these two brave souls, reported by Amarnath Tewary in BBC News:

“Before our eyes little children, women and elderly people were being swept away in the strong currents of the flood water,” Shukla told the BBC.

An idea came to him and Paswan to tie three empty drums together with thick bamboo sticks and then place a wooden bed on top.

They initially took six children on it for 3km (1.8 miles) in neck-deep water to reach a safer place.

Over three days they evacuated over 40 people – mostly children, women and elderly people.

The disastrous floods in Bihar has brought in its wake untold tragedy and hardships on people. However, from the wreck have emerged many heroes who never really had any intentions of becoming messiahs for the millions trapped in misery. It was circumstances and their inherent qualities that made them look inwards and turned them into great comforts for the suffering masses.

Another one of them is Anand Mohan, a recent graduate of Indian Institute of Technology (IIT), who intended to return to his home in Bihar for a few days before joining a multinational in Australia. Destiny had something else in store for him, and when he came to Sharsha, he found his hometown ravaged by the floods.

Mohan could not resist, and plunged into the relief operations. He was soon joined by more like-minded people, one of which was Ravi Verma, and together they formed a group called Aastha (Faith) Volunteers. They started collecting donations from friends and local people and providing help and support to the people in the relief camps. Aastha now has a team of 15 dedicated volunteers managing more than 300 flood victims.

“Now we do not want to go anywhere else. Here we’re getting everything from these people. They’re taking care of us more than the government or other agencies,” said Sanjay Kumar Mukhia from the neighbouring district of Madhepura.

He lost 16 members of his family in floods caused by rampaging rivers.

“My three year’s old son survived only because of milk supplied by these bhaiyas, (brothers),” said another flood victim, Ghuran Ram.

Vijendra Rai’s three children were suffering from acute diarrhoea – but they all survived thanks to timely medical help from Aastha volunteers.

What is even more admirable is the way these youths shrug off media attention that most other proclaimed organizations, government bodies and media houses clamour for. Theirs is the spirit that The Better India strives for.