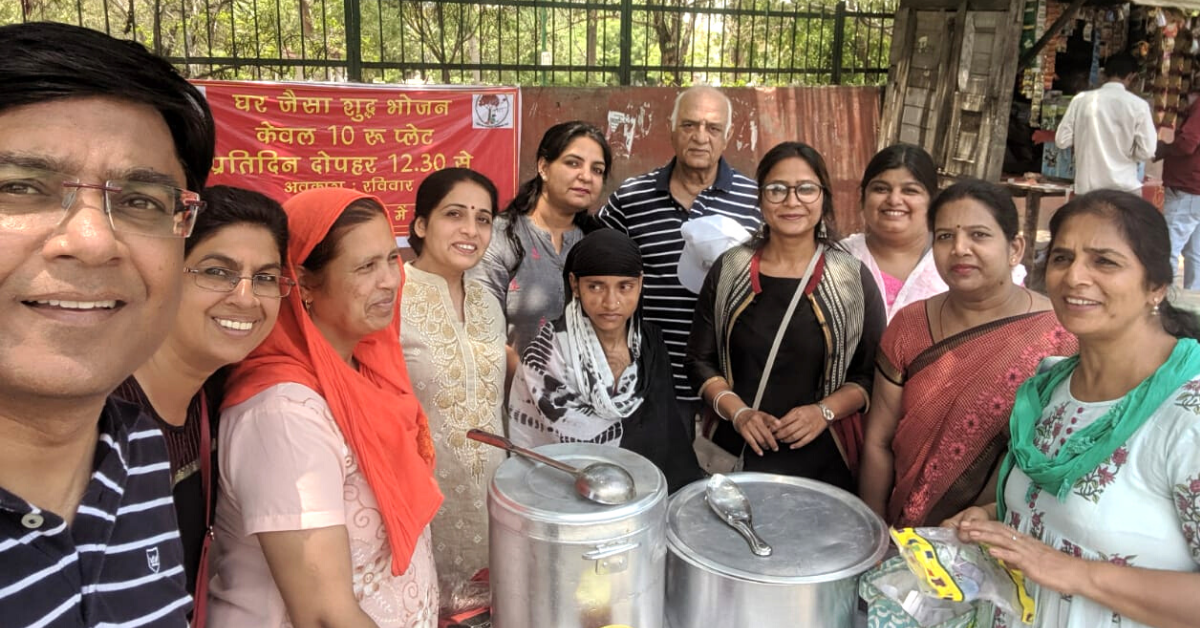 “The daily wage workers, labourers, rickshaw pullers etc. are in large numbers here. When I did my research in this area, I found that getting a good meal for less than Rs 40 was impossible, and even that was adulterated more often than not.”

Since November 2018, Sanjay Dodrajka has been serving smiles and health with platefuls of hot and fresh food. And so far, this 47-year-old Chartered Accountant from West Delhi has served food to 37,000 people at only Rs 10 per plate!

Let’s find out the how, when and why of his story.

The Beginning of Happiness on a Plate

The loss of a friend propelled Dodrajka to establish an NGO — Hamari Udaan almost five years ago. Of the many social welfare activities that the NGO runs, one of them is a scheme under which daily wage labourers in and around the West Delhi area are provided with a wholesome meal for just Rs 10.

If you like to kickstart your day with a warm beverage, we have an entire range of natural, healthy and preservative-free drinks here.

Inspired by a similar Noida-based initiative called Dadi Ki Rasoi which serves a plateful of food at Rs 5, Sanjay decided to call his idea Food with Dignity. “I stay in Maya Enclave in West Delhi where there are two big industrial areas. The daily wage workers, labourers, rickshaw pullers etc. are in large numbers here. When I did my research in this area, I found that getting a good meal for less than Rs 40 was impossible, and even that was adulterated more often than not.”

This was a need that Sanjay and his group of volunteers wanted to address. In November 2018, he started serving food just outside his own colony.

“You will not believe how much research went into finding the right variety of rice and dal. We visited multiple shops to find the best variety at the most affordable cost.”

Pricing of the meal

Sanjay decided to price a meal at Rs 10 to avoid problems like giving change and to meet other expenses. For Rs 10, one can get a plate of basmati rice, and curry which could be either rajma, chole, soyabean vadi, or sometimes even kadhi.

“While the amount of rice that we serve is constant, one can get multiple servings of the curry. Most of the food that we serve is protein-based so that it provides the workers with energy. Sometimes we also have people who sponsor halwa on their birthdays and anniversaries,” he says.

Once Sanjay realised that the people from his locality were also availing the service, he increased the price for those who can afford them. “While the number of repeat customers we have is almost 50 per cent, we ensure that we first serve the workers and those who cannot afford a meal of more than Rs 10.”

“We are often thanked and told that because of the hygienic and nutritious food we serve, the workers are able to work better and be more productive. In fact, many of them have also been able to save almost Rs 800 to Rs 1,000 a month because of eating at Food with Dignity,” claims Sanjay.

Lunch is served from Monday to Saturday at the same venue. Sanjay has employed three female cooks and two other ladies who help in the distribution of the food. “Being able to provide employment opportunities to these ladies is an added advantage,” says Sanjay.

On an average, the ladies make Rs 200 for about 4 hours of work each day.

“The kitchen that started with serving around 60 people a day today serves almost 200 and the aim is to serve upto 400 a day,” smiles Sanjay.

When asked how much it costs to run the kitchen and how Sanjay manages it, he informs, “On an average, we need about Rs 50,000 – for ingredients, renting out the place where we serve, salaries etc.”

Sanjay gets financial support from residents from his West Delhi colony along with a few friends and family members who chip in from time to time. “They all come together, volunteer their time, energy and money to run this,” shares Sanjay.

Assisting Sanjay and his team is another NGO called ACT, which is a West Delhi organisation running women Self-help Groups. It is this group that provides assistance with the cooking and distribution of the food.