Son of a newspaper vendor, Aryan Mishra purchased his first telescope by skipping meals. He then spotted an unknown asteroid when he was just 14!

It began on a hot summer night when his family decided to sleep on the terrace of their home. The then 7-year-old Aryan Mishra lay on the mattress staring up at the sky in wonder. “All I saw was a sky full of stars that stayed still for hours. My first thought was to catch them in my hands,” recalls Aryan. Soon, this fascination for the mysteries of the cosmos led to a burning passion to learn more about astronomy.

“My love for stars took an academic turn in class six or seven. As soon as I learnt how a telescope can bring us closer to the stars, I demanded one at home,” he shares.

Support a cause and the environment. Check out a collection of wonderful eco-friendly products created by artisans with disabilities.

With his father working as a newspaper vendor, an equipment like a telescope was a bit too expensive. His parents tried encouraging him to take up another hobby but Aryan was adamant. For the next 18 months or so, he saved his pocket money by walking to school and skipping meals.

With Rs 5,000 Aryan purchased his first telescope. And thus began his space-adventure. Now, pursuing a BSc in Physics from Ashoka University, Aryan is bringing the cosmos right into the classrooms with his astronomy labs. Having started his initiative last year, Aryan has so far installed his astronomy labs in five schools across Gujarat, Haryana, Punjab and Delhi.

Recently, the Central government recently got in touch with Aryan to explore the possibility of expanding the same in Kendriya Vidyalayas and Jawahar Navodaya Vidyalayas.

Recalling how his science lectures felt incomplete without any practical activities, Aryan, tells The Better India (TBI): During my schooling, we learnt about the infinite solar system. Though we had pictures of galaxies and planets in our textbook, we never got a chance to actually use the telescope to look into space. The idea of having astronomy laboratories where students get to do astronomical observations stayed with me and that is how my project mushroomed.” While Aryan designs the lab keeping in mind the syllabus of the students, an interior designer turns the laboratory into a quirky place for the kids to explore the universe.

The lab comes with four telescopes and 25 Planispheres – a device with two discs showing star charts that assist in recognising stars and constellations.

Other features include moon-mapping catalogue, biographies and pictures of astronomers, posters of the Milky Way, time tables of planets rising and setting, among others. The installation process of the labs takes up to a week and Aryan provides a 3-day training to teachers on skywatching, usage of the telescope, planispheres, moon mapping and so on.

It has been almost eight months since Delhi’s Modern Public School installed Aryan’s lab. Here’s what Alka Kapoor, the Principal of the school has to say: Initially, we were a bit apprehensive about the lab project as it was a very novel idea. After thoughtful deliberation, we decided to give this young entrepreneur a chance. The multi-disciplinary approach is beneficial to all teachers. The astronomy lab has ignited the spark of curiosity among students and teachers for astronomy, space science and even ISRO programmes. Our children need such exposure and awareness. Branching out to government schools.

“Having astronomy labs in private schools is not a new phenomenon. They can afford a telescope. Let alone astronomy lab, the government schools curriculum does not entirely cover chapters on cosmos. Before knocking on the doors of private schools, I went through an unsuccessful tedious process of introducing labs in government schools,” he shares. 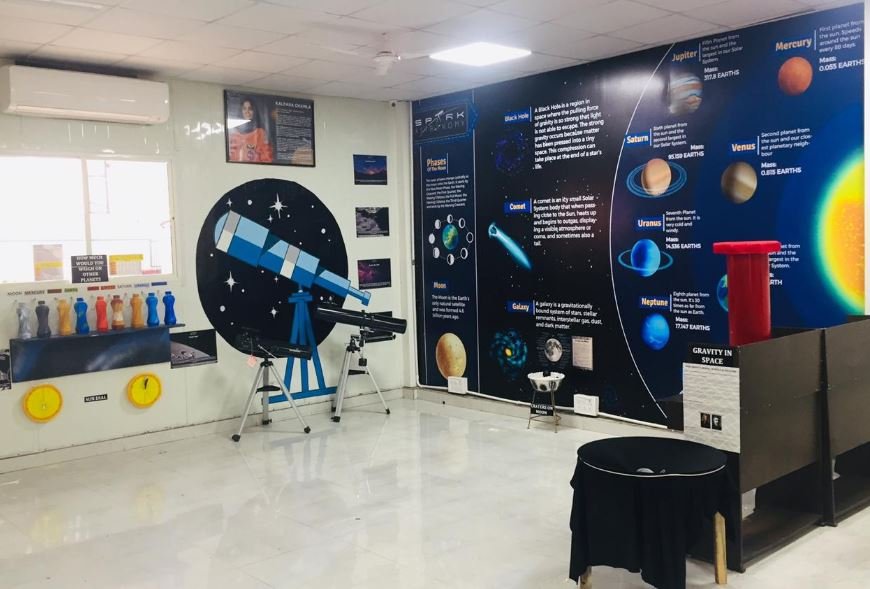 “With ISRO making giant astronomical strides, it is vital we include the subject in the school curriculum. Fortunately, this time I do not have to deal with all the paperwork needed for permissions. We hope all our efforts do not go in vain in government schools,” he adds.

For almost all of his school life, Aryan accompanied his father at 4 am to drop papers in a neighbourhood of Delhi. While the father did ask the little boy to lend him a helping hand, he also made sure that his son was not deprived of education.

Once Aryan had acquired his hard-earned telescope, he took it to his school to share his love for space with his friends. When he turned 14, he participated in an outreach programme under the Astronomical Society of India in 2014. With no laptop or smartphone, Aryan would visit a cyber cafe with his friend Keerti to sift through data in search of an undiscovered asteroid.

Finally, success came when the friends discovered a Near-Earth asteroid between Mars and Jupiter. The discovery led to praises and headlines. Noted experts in the field of astronomy reached out to him, inviting him to seminars and lectures to speak about his discovery.

He even got to meet and interact with his idols including Sunita Williams, Rakesh Sharma, Astronaut Don Thomas, and also the family of the astronaut, Kalpana Chawla. “I had not expected such an overwhelming response. I chose to bring about change with that kind of attention and respect I got from so many people. And astronomy labs is my biggest step towards it,” says Aryan.

Aryan’s aim is to build 500 astronomy labs of which 12 will be built by February in partnership with the Ministry of Human Resource Development.

As for his personal goals, Aryan plans to fulfill his dream of becoming a pilot after completing his graduation.

Through his organisation, he hopes to build a Dark Sky Sanctuary in India.

“Spotting even one star in urban areas is nearly impossible. I want to create a zone that restricts artificial light and all kinds of pollution. We desperately need a starry area to promote astronomy. Building an observatory to encourage research and development in the astronomical field is another goal I wish to achieve,” he signs off.

Get in touch with Aryan Mishra here.