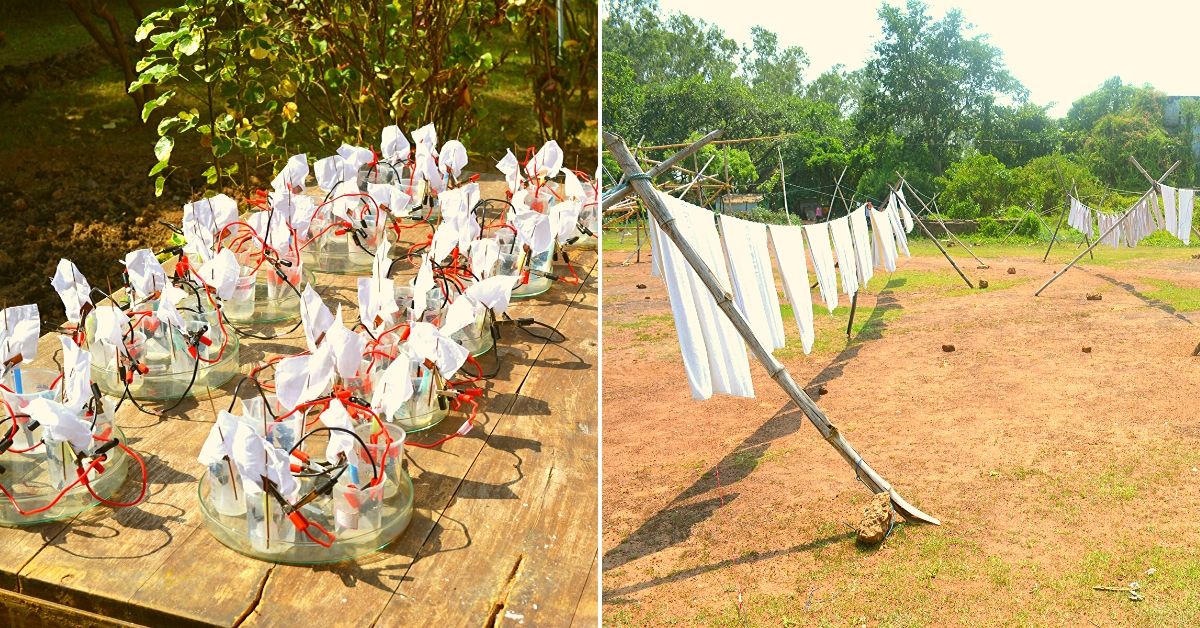 “Until now, it was beyond imagination that a wet cloth being dried in a natural atmosphere could be capable of generating clean energy.”

Can you imagine that the clothes you wear have the potential to generate electricity? All you need is a pinch of salt, drying washed clothes and a commercial super-capacitor, according to researchers at IIT-Kharagpur.

This uber-cool water-saving device easily fits on to your tap to save up to 80% of the water that would have otherwise been used up with a normal tap! It can easily be retrofitted onto most standard taps.

Connecting 50 drying clothing items to a commercial super capacitor across a surface area of 3,000 square metres in an open space, researchers from IIT-KGP, at a remote village in West Bengal, were able to facilitate the discharge of 10 volts of energy in 24 hours through a cost-effective device. This is enough energy to power a White LED for over an hour.

“The clothes we wear are made from cellulose-based textile which has a network of nano-channels. Ions in saline water can move through this interlace fibrous nano-scale network by capillary action inducing an electric potential in the process,” explained lead researcher Dr Suman Chakraborty of the Mechanical Engineering department, speaking to the KGP Chronicle, the institute’s in-house publication.

Traditionally, woven cellulose-based fabric contains a tiny channel network which has been used by the researchers for electrical power generation. They successfully guided the movement of saline water amidst continuous evaporation across a living plant. The device design inherently exploits a large transpiration surface for achieving a sustainable motion of salt ions, through natural evaporation phenomenon, further states the publication.

“We observed that from a single unit of such devices, we are able to get 500 to 700 millivolts. We further have upscale these devices may be up to 40 or 60 units and have connected those devices in a series and parallel connection. From this experiment we observed that from that 40-50 connection we are able to generate 12 to 13 volts electric potential,” says PhD scholar Sankha Shuvra Das of Mechanical Engineering Department, IIT Kharagpur, speaking to ANI.

What’s particularly exciting about this method is its potential for scalability.

Professor Chakraborty tells ANI, “A bowl of water with a little bit of salt and a piece of cloth can generate a few milliwatts. You can imagine how effective it will be on a large scale. It’s enough to light up a small hut.”

“If we wash clothes and keep them for drying, even this drying process can help you generate electricity. Instead of using clothes, you can even make use of handkerchiefs, but the only catch is that you have to use salted water because salt ions are getting transported through pores to generate electricity. In extremely remote areas where there is no electricity, we need a minimum power source for one night lamp or mini healthcare device that will require little power to run the device where external battery support is absent. It’s scalable. If you have extremely large ionic current in a dense bundle of nanopores, you can generate electricity,” he tells The Better India.

Making matters more exciting, he tells News 18, “Another novelty of this device is the use of intrinsic surface energy of the fabric for driving the current. In contrast, other artificially engineered power generation devices need external pumping resources. This eventually culminates into a utilitarian paradigm of low-cost power harvesting in extreme rural settings.”

Also Read: Why IIT-Madras’s Affordable ‘Standing Wheelchair’ Can Be a Lifechanger for India’s Diff-Abled

Going forward, the institute will propose the expansion of this project to the West Bengal government as an alternative source of power generation for under-served rural communities. Who ever thought that the simple act of drying wet clothes could one generate clean energy? If researchers can significantly scale this project, it could be a gamechanger.