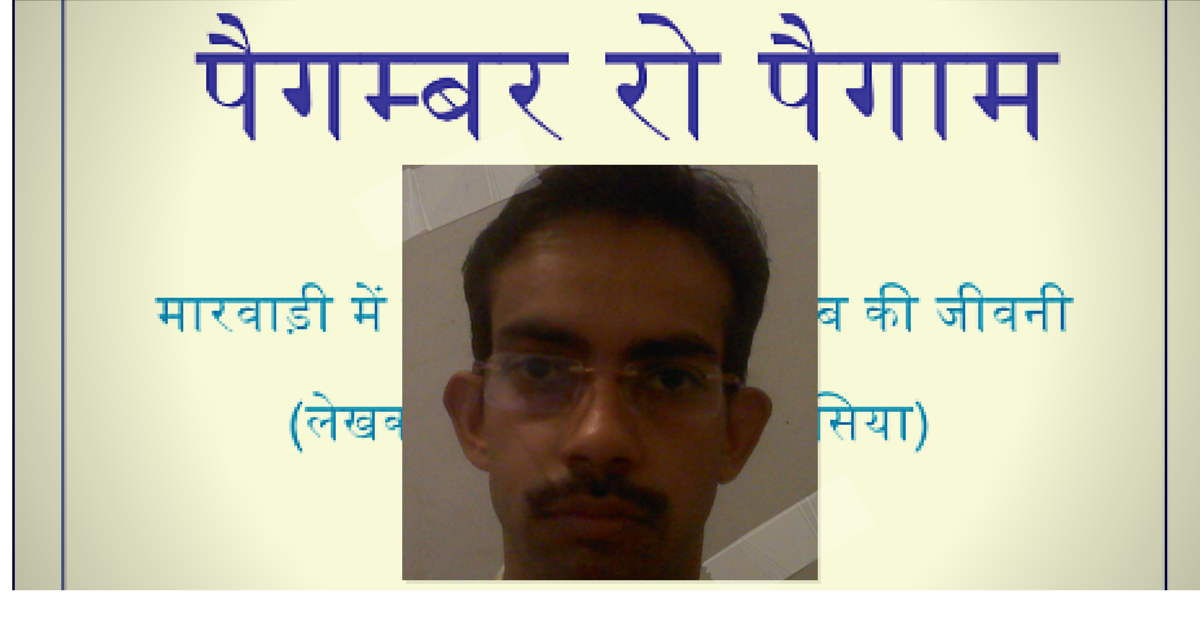 Rajeev Sharma was heavily influenced by the ideas and life of Prophet Muhammad and decided to write his biography into Marwari. The book is called “Paigambar Ro Paigam” and is available online for free download. Here’s what influenced him to take on this commendable task, after translating several Hindu texts and running an online library.

Rajeev Sharma was just in 9th grade when he started a library, “Ganv ka Gurukul”, in his village called Kolsiya in Rajasthan. His love for reading made him read a lot of books on various topics and people. But it was when he read about Prophet Muhammad that he got heavily influenced and wrote a book on him in Marwari, a regional language of Rajasthan.

The book is called “Paigambar ro Paigaam”, and it talks about the life of Prophet Muhammad in 112 pages. Also, Sharma claims that this is probably the first biography of Muhammad to be written in Marwari language.

Often, we read about a religion and get influenced by its ideals. But how often does it happen that in a country like India, where religion plays such an important role in defining your identity and place in society, a Hindu boy not just got inspired by a Muslim leader but also wrote an entire book on Him.

“When I was a kid, our teachers would tell us to read books as part of our course. Since those days I spent a lot of time reading. I read Muhammad’s biography too and I thought that I should write about this amazing personality,” he says.

Sharma recall a personal experience where one of his relatives got married at a very young age of 5. The girl’s husband died during the last phera (ritualistic circle taken by bride and groom in an Indian wedding), and she had to spend her entire life as a widow.

“She did not even know the meaning of marriage and she had to live as a widow for her entire life. It was a long time ago and I wasn’t even born then, but I have heard about her hardships. I leant that Muhammad was against child marriage and supported women empowerment. I was highly influenced by this,” he recalls.

After reading many books about him and doing a good amount of research, Sharma was all set to write the book. A book on a Muslim prophet who had left a great impact on the life of this Hindu Marwari boy.

“I didn’t consider religion to be a big deal here. If we think about our past, all religions would live with mutual harmony. It is recently that the intolerance levels have increased. Also, it didn’t occur to me that being a Hindu boy, writing a book on a Muslim leader can create an issue as I am not hurting anyone’s sentiments here. I am just inspired by him and writing the truth. And I received a great response and encouragement from all my friends,” he says.

Paigambar Ro Paigam,  is available for free on Sharma’s E-library, which has collection of over 300 books.

When Sharma met with an accident, he came to Jaipur and had to shut down his village’s “Ganv ka Gurukul” which had almost 1,500 books in it. He started an e-version of the same.

He studied Naturopathy in the city and started selling herbs which earned him some money to run the new version of the library.

“Paigambar Ro Paigam is already being appreciated by many. I have already received over 12,000 hits on my website for this. People across the globe have downloaded it,” he says. If he finds a good publisher, he is all ready to print the book too.

Highly influenced by the Quran and Muhammad’s ideas, Sharma says there is no other book that talks about peace and harmony better than the Quran. In the future, he is planning to translate it in Marwari too.

Having translated other Hindu religious books in Marwari, Sharma’s first experiment with a different religion has already created a stir. “I want to create libraries in all the villages of India. Books are the best thing one can have and children should inculcate the habit of reading,” he says.

For more information, check out his e-library Ganv Ka Gurukul.