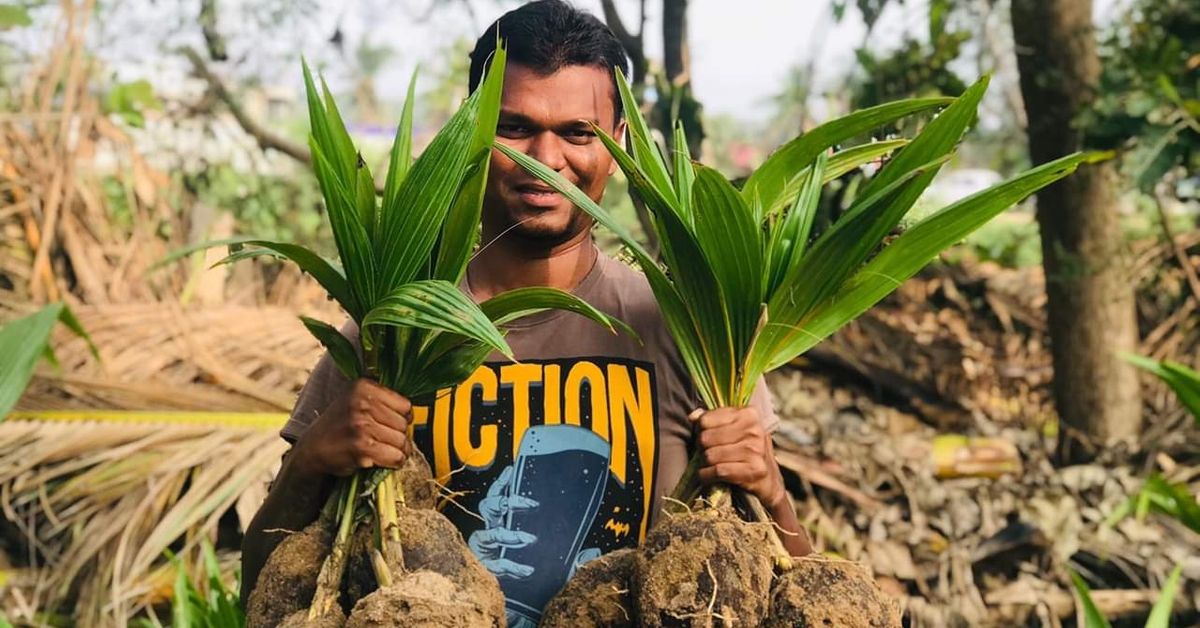 In November 2018, 31-year-old Nimal Raghavan, a Dubai-based software developer, decided to make a trip to Nadiyam, his native village, which is located in the Cauvery Delta Region. Little did know that that he would be welcomed with the sight of utter destruction left behind by the severe cyclonic storm, Gaja.

Make this Diwali special and memorable for your loved ones by gifting them this exotic box of homemade chocolates shaped like firecrackers!

Speaking to The Better India (TBI) Nimal recalls the horror.

“90 villages located in the Delta region, which is known as the ‘rice bowl of India,’ lost everything they had. The cyclone snatched people’s near and dear ones, damaged their property, destroyed their agricultural land and adversely affected their livelihoods. After the news went viral, many of my friends who were working abroad but had plans to eventually settle down here, changed their minds. However, the most unfortunate thing that happened was that generations of farmers who had lived here started abandoning their only source of livelihood⁠ and moved to cities in search of employment.”

Perturbed by these developments, he did the unthinkable and resigned from his high-paying job in Dubai.

“I decided to stay back in my hometown and dedicate all my energy to help the affected villages return to normalcy,” he says.

Starting with relief work, he ran the viral social media campaign #BounceBackDelta which sourced relief materials such as clothes, groceries, toiletries, tarpaulin sheets, and monetary donations from across the globe to the 90 villages affected by Gaja. He was soon joined by other youngsters in the village for the #DeltaSaplingChallenge which aimed to mitigate the loss of thousands of trees.

While the efforts continued for two months, Nimal realised they couldn’t rely on relief alone. A sustainable solution was required to help the villagers bounce back and prevent farmers from giving up agriculture.

While sourcing sapling was certainly the first step, when Nimal and his team travelled across villages and interacted with the farmers, they unanimously lamented about the lack of adequate water resources in the region to sustain farming

For the longest time, the river Cauvery has been the only source of clean water for the villages and towns in the Delta region. The river originates in Karnataka and ends in the delta region, so the villages in the area are located at its tail-end.

“Every year, we beg for Cauvery water from our neighbouring states. Of the 50-60 per cent of the water we get, we end up losing nearly 150 TMC (thousand million cubic feet) of every year in the delta region due to lack of proper means of storing and channelling so much water. And so we decided to kickstart an initiative that could reverse this loss by rejuvenating local reservoirs and other water bodies.”

Under this, the group took up a pilot project of desilting and rejuvenating the gigantic Peravurani lake, which is one of the biggest lakes in the Delta region.

If rejuvenated, the water accumulated in the lake would solve the water crisis for several villages in the Thanjavur and Pudukottai district.

But the challenges were many.

When Nimal’s team started desilting this colossal lake, they only had 11 members in their group. The initial capital they started with was just Rs 20,000, whereas the expenses for renting heavy desilting machinery such went upto Rs 40,000 to 60,000 per day!

Although the team saw no restraint from the district administration and the Public Works Department (PWD), sections of elders in Peravurani and nearby areas questioned the group’s capability to pull the project off.

“They would discourage us, but as time passed, the youth continued their back-breaking efforts. Moved by their dedication, the inhabitants of Pongadu and Pazhaya Peravurani villages went door-to-door and contributed money amounting to almost 2 lakh. We were moved to tears by this gesture.”

One of the village kids also donated six months of his savings. And a married couple, merely 20 minutes after the wedding ceremony, came to the site, and donated money and saplings.

A crucial step that the group followed to strengthen this support was maintaining transparency through their WhatsApp group. Apart from posting pictures of donors⁠—who were not just villagers but also people who had settled abroad and had links to the region⁠—they maintained and shared records of expenditure and the progress attained daily.

In a short span of 104 days, Nimal and KAIFA desilted approximately 250 acres of the lake and set up soil boundary walls⁠—four km on one side, 12.5 km on another. They deepened the lake, raised the height of the existing bund by 4-5 metres and also formed and widened a bund on the northern side of the lake.

Shedding light on the impact, Nimal says, “As we speak, the lake has reached 70 per cent of its capacity. This was nothing short of a miracle for the people, who had waited for nearly two decades for this development. The rejuvenation of Peravurani will avoid wastage of 150 TMC of water in the delta region and impact more than three lakh lives.”

Karthikeyan Veluswamy, a 41-year-old farmer and an important member of KAIFA, says, “Our farmers were forced to leave agriculture due to water scarcity. People had to buy water in large numbers, even for their daily household purposes. That is when we knew, rejuvenation of our existing water bodies was the need of the hour. We faced several challenges, but Nimal’s optimism kept us strong. Where once we had to dig as deep as 800-100 feet for borewells, today we are finding water at 150-200 ft.”

Lake reviver, Anand  Malligavad, who has been providing inputs to Nimal, says, “The challenges of rejuvenating a lake are many. From undertaking a detailed study of the history of the lake, studying rainfall patterns, native flora and fauna, inspecting the soil data and quality, strengthening and raising of existing bunds, to driving community engagement⁠—there are several factors, one has to keep in mind.”

He adds that taking up the responsibility to revive a lake doesn’t stop at desilting it, building a bund and leaving.

“They have to drive community engagement by taking important stakeholders into confidence right from government authorities to villagers benefiting from the project. While doing so, you have to match the altitudes, speak with humility and maintain complete transparency. Nimal is moving in the right direction, and the impact of his project is large. I hope he continues to work on more lakes and inspires even more youth to join in.”

Nimal and his team with the support of the villagers and well-wishers have spent more than Rs 32 lakh to rejuvenate the lake. Recently, in a ceremony graced by officials from the beneficiary districts, the lake was handed over the people.

The project doesn’t end here. It has motivated youth and residents across the two districts to take up desilting and restoration of 54 more water bodies.

KAIFA is now targeting the 94 km-long Grand Anaicut Canal itself, the primary source of Cauvery water for the delta region.

The canal presents a picture of neglect and has a defect, says Nimal. The maximum quantity of water that it is supposed to release is 4,200 TMC, but currently, it cannot exceed 3,000 TMC, because of the issues it is plagued with.

If they succeed in their attempts, hundreds of villages in the Thanjavur and Pudukkottai district area will receive ample water throughout the year, with significantly less water wastage.

For every grain of wheat and rice, you eat, several farmers strive to grow it. But today they are starving. Our farmers have served us all these years; it is our time to help them.

“We spend thousands per day on equipment and can cut the costs per day down twice if we gather enough funds to purchase our own equipment. The money that we save will help us expand our activities to other water bodies and reservoirs too. My humble request to people who believe in our cause is to come forward and donate any amount they can.”

You can help Nimal bring the waters of Cauvery to hundreds of farmers. Support him by donating here: bit.ly/help-kaifa

Watch the rejuvenated Peravurani Lake in all its glory in a video below: