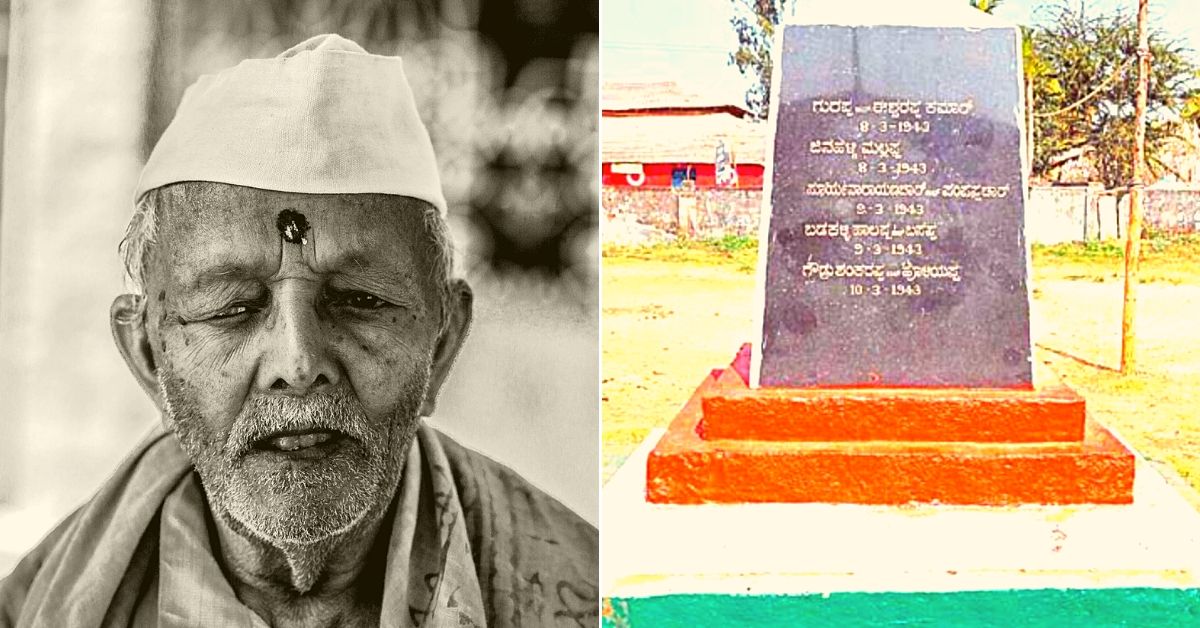 Left: Huchuraayappa, a freedom fighter from Issuru Village, Karnataka. Right: A stone engraving with the names of those who sacrificed their lives. (Source: Naveed Mulki/@mohsinstats)

In August 1942, when Mahatma Gandhi called for the Quit India movement, a tiny village down south in Karnataka’s Shivamogga had already decided to break free. But it did, becoming the first village in India to declare itself independent. #LostTales #history

If you ever go to Issuru — a small village in Karnataka, you will find an engraved black stone at the renovated courtyard of a temple honouring those who sacrificed themselves for the dream of a free land from the British Raj.

While Gandhi was calling for the British to ‘Quit India’, a small village in Shikaripur Taluk of Shimoga (Shivamogga) district had already declared Independence from colonial rule. This bold decision by the farmers of Issuru reverberated across the nation and brought bloody consequences for those who participated in this act of defiance.

This year, celebrate Lord Ganesha’s birthday by giving back to mother earth! Go with the eco-friendly with this plantable seed Ganesha from Pepaa, here.

Surrounded by hills and paddy fields, this quaint village hides a violent past. In August 1942, Issuru declared its Independence and set up its own ‘prati sarkar’ (provisional government). It was at a village gathering protesting against the high taxes that year when the decision was taken not to pay taxes and appoint ‘prati sarkar’.

“The youths who had worn the Gandhi caps, hoisted the tricolour flag on the Veerabhadreshwar temple. They also displayed placards, warning irresponsible officers of the government not to enter the village. Such placards were hung at the entrance of the village,” says this document.

Appointed to this provisional government were two 16-year-olds—Jayanna (appointed Tehsildar) and Malapayya (appointed sub-inspector). Influential grassroots leader Sahukar Basavenappa took the decision to appoint these teenagers because they were minors, and thus couldn’t be jailed. Alongside his fellow comrades, Basavenappa came up with a set of rules and regulations for the village in complete defiance of the administration.

Officers of the revenue department who came to collect taxes for the colonial government were routinely insulted (called ‘English Dogs’), harassed and locals even went to the extent of snatching away and tearing up important documents from their hands. Eventually, a complaint was lodged against the village for non-payment of taxes, and 10 officials, including a tehsildar, sub-inspector and eight policemen, were sent to manage the situation.

“A crowd assembled at the open field near the temple again. This time the villagers forced the Tehsildar and Sub-inspector to wear Gandhi caps. Threatened by the heated atmosphere that had started to build up, Kenchegowda fired a few shots in the air. However, it only worsened the situation which ended up in the lynching of both officers,” says Basavaradhya, a descendent of Basvenappa, speaking to YourStory.

The sight of their slain officers enraged the British administration.

In response, they sent the army four days later to quell the rebellion, and these government soldiers partook in looting, arson and atrocities against the locals who hadn’t managed to escape. Those who did manage to escape were hiding out in the nearby jungles. After the raid by the British administration, the local police made several arrests, following which five of the mutineers Gurappa, Malappa, Suryanarayanachar, Halappa and Shankarappa were sentenced to death for their role in the death of the two British officials, while three women were given stringent life sentences.

Also Read: How An English Geologist Became The ‘Father of Indian Prehistory’

However, upon hearing the news of Issuru’s rebellion, the Mysore Maharaja Jayachamaraja Wodeyer coined the immortal phrase, “Esuru kottaru Issuru kodevu” (We’ll give you many villages but not Issuru)”. Although he couldn’t save the five men, he did manage to convince the local governor into commuting the death sentences of many who defied the British.

These are the stories you won’t read in a standard history textbook. Despite engaging in violence, what stood out was the defiance of village farmers who dared to take on an empire.