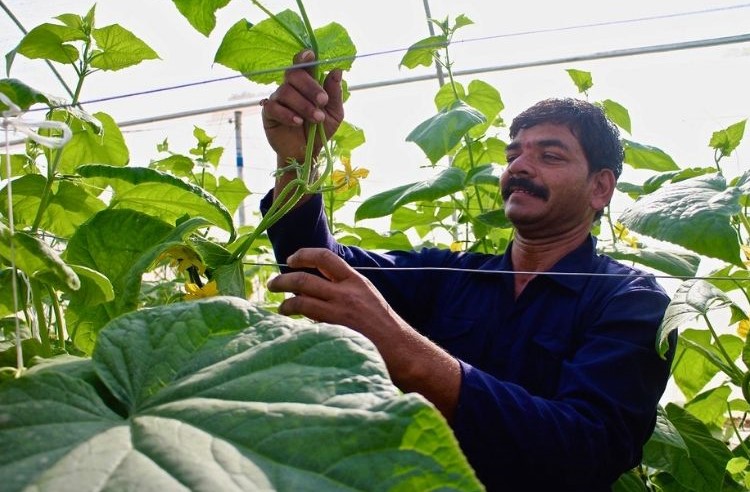 “Our greenhouse cuts off excess heat by 2-4 degrees Celsius, reduces pests by 90% and saves 98% water when compared to open-field conventional irrigation.” #Startups #FarmersFirst

CH Prabhakar, 45, a farmer from Dacharam village in the Siddipet district in Telangana—where atleast 435 Mandals out of the total 584 are drought-hit—was facing a hard time due to the scarcity of water in the region.

However, five months ago, Prabhakar heard his friend and fellow farmer, Kana Reddy speak about Kheyti and the services provided by the startup. Intrigued, he started availing Kheyti’s services and claims that he has earned good profits with comparatively lesser inputs.

Leaky faucets waste thousands of litres of freshwater each year. This amazing water-saving device easily fits on to your flush tank to save up to 80% of the water that would have otherwise been used up!

This not only helps farmers earn a stable income, but they are also able to earn greater profits, which is precisely what happened with Prabhakar.

Kheyti was founded in late 2015 by Sathya Raghu Mokkapati, Kaushik K, Saumya, and Ayush Sharma. Sathya and Ayush spent six years giving training and providing marketing linkages to smallholder farmers in Telangana and Karnataka through their other organisation, Cosmos Green.

Their experience at Cosmos Green is what gave them the confidence to start Kheyti.

In 2014, Sathya and Kaushik met each other at the Acumen India Fellowship Program, and that is where the conversation about Kheyti first began. As four of them were already in the social sector, they acknowledged that hard work doesn’t pay smallholder farmers in India. Thus, Kheyti started with the vision to increase the profits of small and marginal farmers.

Sathya explains that farming is susceptible to conditions like excessive heat, rain, drought, and pest attacks among others. The other significant gap concerns helpful advisory about seeds, financing and market linkages.

“We build houses to live in safety and to protect ourselves from environmental factors like heat, rain, insects etc. Likewise, a greenhouse helps plants thrive. Our greenhouse cuts off excess heat by 2-4 degrees Celsius, reduces pests by 90 per cent and saves 98 per cent water as compared to open-field conventional irrigation,” says Sathya.

So, once they realised the crux of the problem and developed a sustainable solution for it, how did they actually go about implementing it?

“We reached out to farmers through Farmer Producer Organisations (FPOs) and conducted meetings in the villages. We explained our model to these new farmers and then took them to the fields to see other farmers in our network and got them to interact,” explains Sathya.

“Our farmers get a loan from the Bank of Baroda to buy the greenhouse and Kheyti does the installation,” says Sathya. In addition to this, the farmers also get training on what to grow, how to grow, when to grow and some other practices.

Prabhakar said that due to his association with Kheyti, he has learnt how much fertiliser to use and the quantity of pesticide to spray on the crop. Earlier when he would buy pesticides, he would spray it in large quantities thinking this would result in higher yields. Kheyti ensures that farmers use as little as 3 to 10 ml of pesticide diluted in at least 20 litres of water.

“Once the farmer has bought the greenhouse from us, we remain closely associated with them for at least five years,” says Sathya.

Kheyti also guarantees that the farmers get agronomy services at their doorstep, the right input at the right time, and the assurance that their products will be purchased.

“The farmer gets the highest market price for their produce. In fact, the income of the farmer is the most important aspect of our model,” says Sathya.  “Farmers can earn an additional profit upwards of Rs.70,000 per year from this modular greenhouse service which sits on 1/10th of an acre.”

Once procured, the produce is sold to retailers like Big Basket, and More among others. Prabhakar informs that the procurement of the produce by Kheyti has helped him save money on the transportation costs that he would’ve incurred in selling his produce at the market places.

Usually, he would end up spending a minimum of Rs 500 in hiring an auto to transport his produce and labour costs would be extra. Now, all he does is gather the produce and reach a common point in the village clusters that Kheyti operates.

Although right now, Kheyti tries to disseminate most of the agriculture-related information in person, they plan on doing this remotely in the future as they will gradually scale up their operations.

Explaining that they have started doing that already, Sathya says, “We create local WhatsApp groups where farmers send photos daily and then our team advises them accordingly. If it’s an emergency, we go to the fields. We are using a software for Customer Relationship Management (CRM) where most of our updates, analytics, reports gets stored automatically and dynamically. We use communication software for Interactive Voice Response (IVR) and calls for mass communications and updates.”

Currently, they work with 154 farmers out of which 113 have greenhouses installed and for the remaining farmers, the installation process is ongoing.

Right now, Kheyti only operates in Telangana, but Sathya mentions that they soon plan to scale up their operations in states like Andhra Pradesh, Karnataka, Maharashtra and Tamil Nadu.

Also Read: Odisha Man’s Start-Up Makes Sure There Are No Chemicals, Toxins in Your Veggies!