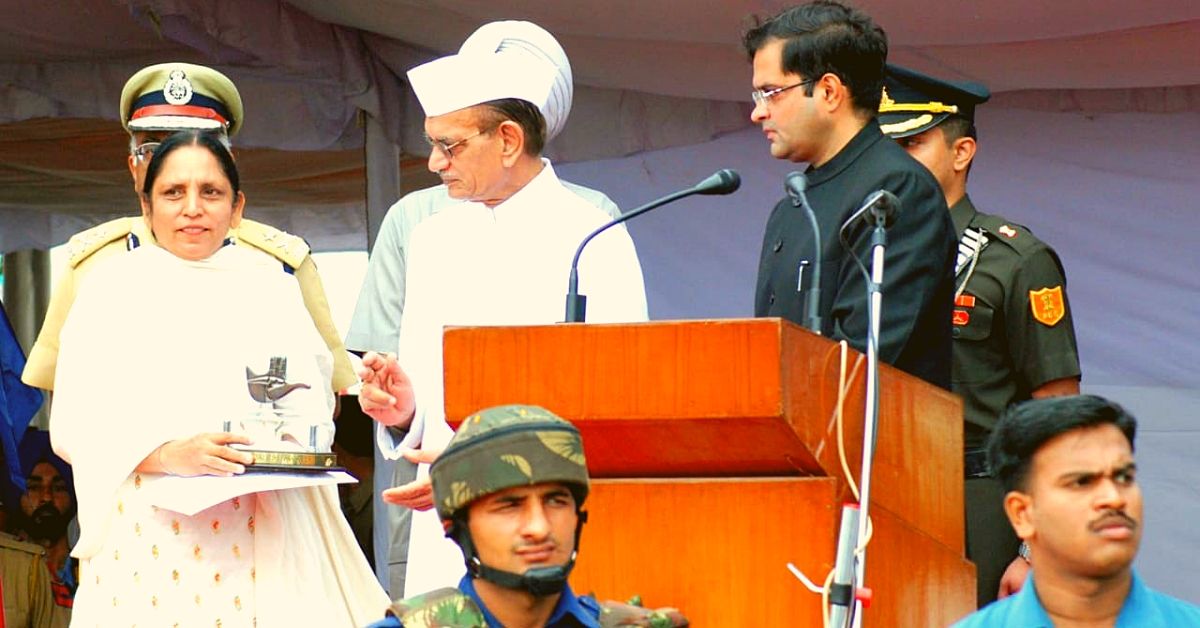 “For the last 20 years. I’ve seen her serving the poor. She runs a free ambulance, gives them food & medicines, and conducts their final rites, spending money from her own pocket. We call her ‘Iron Lady’ because she’s doing such a tough job,” says Dr Vipin Kaushal of PGIMER, Chandigarh. #Respect

The kind of work 63-year-old retired bank officer Amarjit Kaur Dhillon does, brings many moments of heartache to her.

Like the death of a 12-year-old child from Gorakhpur due to hepatitis, who passed away on his birthday which was to come a few days after Valentine’s Day, 2013. When Dhillon asked the mother of the child about his last wishes, the inconsolable mother told her that her boy wanted to go home to celebrate his birthday with new clothes, a cake, noodles and candles.

“I went to the market, bought a near pair of jeans, shoes, shirt, goggles, a heart-shaped cake and accessories despite heavy rains. My sister-in-law, meanwhile, cooked some noodles at home and brought it to the hospital in a tiffin,” she recalls.

Want to add something healthy to your breakfast? Enjoy the Honey and Spice Naturally Flavoured Tulsi Honey here.

After arranging all things, Dhillon accompanied the mother to the cremation ground. There, they cut the cake and distributed it to those attending his cremation. They even touched the child’s lips with pieces of cake as even in death, they wanted to respect the young boy’s wishes.

“However, seeing the agony on the mother’s face as we proceeded to cremate her son is something I’ll never forget,” adds Dhillon.

Painful though such moments are, Dhillon has decided to dedicate life to help the poorest amongst us and give their loved ones a dignified funeral.

Since 2000, the year she took voluntary retirement from her job at the Punjab and Sind Bank, Dhillon has helped cremate more than 300 bodies of those whose families couldn’t afford a proper burial and those who have no one.

Born and raised in Patiala, Punjab, Dhillon found a job with the bank in the late 1970s, and moved to Chandigarh.

Later, she took voluntary retirement to serve the needy.

Long before she began helping poor families give their loved ones a dignified funeral, she was deeply engaged in social work donating her own money and collecting from her colleagues to fund kidney transplants and organise medical camps for the Red Cross.

“I began my social service work by helping patients finance their heart surgeries, although my focus now has shifted to helping the poor get their final rites in dignity. Thus far, I have helped over 100 heart patients at Post Graduate Institute of Medical Education and Research (PGIMER) in Chandigarh,” says Dhillon, speaking to The Better India (TBI).

However, it was a visit to PGIMER with her mother in 1998 that changed the scope of her work.

“There, I saw so many poor patients struggling for shelter, food, medicine and treatment. Seeing this broke my heart. From thereon, I dipped into my pocket to help poor patients with money to buy food or medicines. I wanted to help them in anyway I could. Two years later, when I visited the hospital I found out about the unidentified bodies lying in the mortuary unattended. The hospital attendants there asked me whether I could help them cremate these bodies to which I agreed. I don’t know why I agreed, but haven’t looked back since,” says Dhillon.

One of her earliest memories of this work is helping a young woman whose husband had passed away after undergoing heart surgery in May 2000. When news came to Dhillon that the young man from Bihar had passed, and his wife had lost consciousness, she took their three children to the gurdwara inside PGIMER, while the mother was taken to the local Red Cross, where Dhillon booked a funeral van for her. Prior to his passing, Dhillon regularly brought food and clothes for the wife and children.

Till this day, she sits at the emergency ward of PGIMER, guiding patients to the right departments, helping the needy with food, medicine and shelter, and in case of an unfortunate death, attends to their cremation.

“I receive a handsome pension, and that money is usually enough for whatever little I do. There are also various organisations in society that also assist me for any kind of special work. When my pension money isn’t enough, I reach out to individual donors who have given me their contact details. It’s not often that I have to ask other donors for money, but only if I have to and then reach out to the first person that comes to my mind. Fortunately, no one has ever said ‘no’ to my call for help,” she says.

Although she seeks no monetary support from the local administration, the Punjab State Civil Supplies Corporation (Punsup) in 2008 donated an ambulance, which helps her carry the body from the hospital to the cremation. This ambulance service is totally free. A local firm provided her with a driver, besides helping her foot the fuel bill. On the odd occasion or during certain emergencies, she drives the ambulance herself.

She recalls an instance in February 2002 when a father refused to participate in his daughter’s final rites, who had died suffering from a rare ear cancer. Dhillon, who had taken care of the deceased from Saharanpur, Uttar Pradesh, made all the necessary arrangements for her funeral.

“I arranged the wood, and settled the funeral pyre there. Unfortunately, her father, a well-educated man, bluntly refused to participate in the funeral proceedings. I asked him, why aren’t you helping with the cremation. What he said gave me a real jolt. He told me that his daughter meant nothing to him because she was married and that her husband should’ve performer her final rites. I was so angry, but we eventually proceeded to give her a dignified funeral. Even today, I feel terrible about the incident,” she recalls.

Despite these heartbreaking moments, Dhillon has no intention of stopping her work. But she is also looking to expand the scope of her work, helping women assert their status in a male-dominated community. She is looking to specifically target the practice of dowry.

“She is doing great service and she has full support of our family. I ensure that I drive her around whenever she has to run errands,” says Manjit Kaur, her sister-in-law, speaking to the Hindustan Times. A source of motivation and strength, Manjit and her husband’s (Amarajit’s younger brother) family have stood like a rock behind Dhillon.

For her efforts, she has won various accolades at the state level. Meanwhile, even doctors at PGIMER have a real sense of appreciation for her work.

“She has done great work in helping poor patients, and giving the unattended deceased persons their last rites with dignity. For the last 20 years. I’ve seen her on the hospital premises, serving the poor with her free ambulance service to take the deceased, who either don’t have anyone claiming them or are too poor to pay for a proper funeral. She conducts their final rites, spending money from her own pocket. She gives them medicines and food, and is a genuine philanthropist. At the hospital, we call her the Iron Lady because she’s doing such a tough job,” says Dr Vipin Kaushal, professor in hospital administration, PGIMER, speaking to TBI.