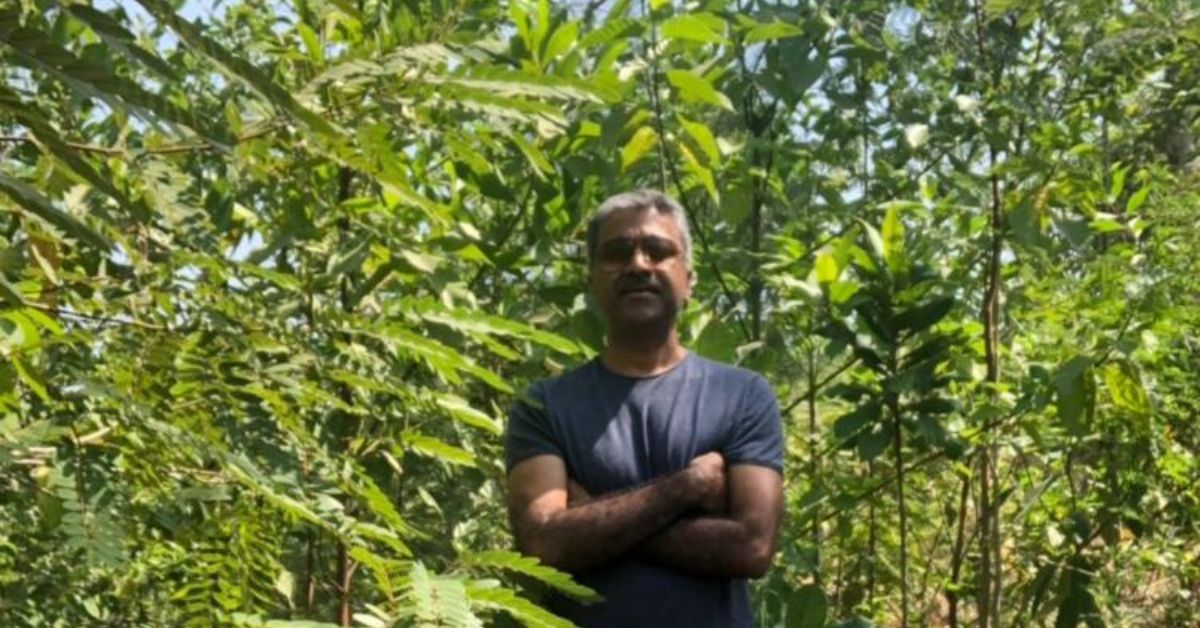 The Better India had covered the story of Malhotras in 2015 and four years later, we are fortunate to cover the story of someone who was inspired by them!

My first ever visit to a Miyawaki forest in Bengaluru, was a fantastic experience as it exposed me to a whole new concept of afforestation in our cities.

It was also slightly strange because there is a distinct demarcation between an urban area and a forest in my mind. But, there I was. In a dense forest in someone’s backyard and that too, in a city!

For Dr Sudhir Pillai, a cardiologist based in Mumbai, the fact that thousands of trees can be grown on a relatively small piece of land was nothing short of inspiring.

He had read about Pamela and Anil Malhotra, a couple who grew an entire forest in Karnataka, and that prompted him to convert his agricultural land near Nerul, Navi Mumbai into a lush forest of native trees.

The Better India had written about the Malhotras in 2015, and four years later, we are fortunate to be narrating the story of someone who was inspired by them!

“I had always loved the idea of working with the soil, and to foster this passion, my wife and I had bought a piece of land in the Raigad district,” begins Dr Sudhir.

Dr Sudhir and his wife, Dr Neeta, are both busy professionals, so they could only travel to Raigad on weekends. But the couple and their children, Siddharth and Maya, truly looked forward to these trips, as they were a wonderful getaway from the fast urban life.

“For a couple of years, we only grew leafy vegetables there. However, after I read about the Malhotras, I decided to make a permanent shift and grow a forest,” says Dr Sudhir.

“We own two plots of land, and one is already a lush green space. So we decided to leave that patch alone and concentrate on the other one which is rocky, and measures approximately 6000 sq ft,” he adds.

Miyawaki is a technique developed by Akira Miyawaki, a Japanese botanist, which helps you grow a dense forest in a restricted patch of land. The method dictates that you grow native species of trees, sub-trees and vertical-growing shrubs in a limited space of land.

Those who have tried and tested this method assure that you only need to take care of the land for two years after which the trees sustain themselves.

In March 2018, the Pillai family visited their land with the sole aim of planting a forest there. They had studied the native species of Raigad—trees that were indigenous and had not been introduced to the area in the recent past—and had a list of 25 such plants ready.

Purchasing saplings or seeds in bulk can be quite expensive, but the forest department nurseries are sure to have a good collection of native species, available at subsidised rates.

However, the family faced a minor setback in this regard.

Sharing the experience, Dr Sudhir says, “When we went to the forest department, they straight up refused to sell us the saplings. They were reserving them for a government tree-plantation event. So, the next challenge was the expense of the 1600 saplings we had planned on planting.”

Each sapling would now cost the family Rs 100, and so, they had to dip into their savings and set aside Rs 1,60,000 to start growing the forest.

But the cost would be worth it.

“This was agricultural land so we could have sold it or nurtured a farm here—both decisions would have been very profitable. But, we decided to spend some more money from our pockets and grow a forest instead. We hired a caretaker to look after the farm, and now, he looks after the forest,” says the cardiologist, adding that about three trees were planted in every square foot of land to make maximum use of the area without causing any congestion.

As the family of four started tilling the land, several curious kids from the neighbourhood questioned them about what was happening. When they found out, they decided to volunteer as well.

Today, a year and four months later, the forest has shown a positive sign of growth.

Pillai tells be that about 96% of the saplings they planted have survived. Only 60 out of 1600 succumbed to extreme rains. The others, although had to be supported with bamboo in their initial phases, have bloomed and some trees have also reached the 20 ft mark within a year!

The family excitedly shares that native fruits like guava, jackfruit, jamun and mango will soon start growing as well.

You may also like: This Karnataka Man Built a 21-Acre Food Forest in 23 years: Here’s How He Did it

“Earlier, we used to visit the farm every other weekend, but as the children grew up, their studies restricted us from travelling so frequently. However, even if Siddharth and Maya cannot make it, Neeta and I make it a point to visit the forest at least once every month and get updates on its growth. Thankfully, we have a dam and a stream of water nearby, so we are not too worried about the water-intensive forest drying up. It’s another year or so of scrutinising its growth after which, the forest will be self-sufficient,” concludes Dr Sudhir.

While the doctor couple has been busy growing a forest, their son, Siddharth, is not too far behind. He recently created a 3D printed model of artificial reef that is benefitting the seas off Puducherry. Here is his story.

With a 1500-tree strong forest and artificial reefs that will help our oceans, the Pillai family is fighting for the conservation of nature one element at a time!