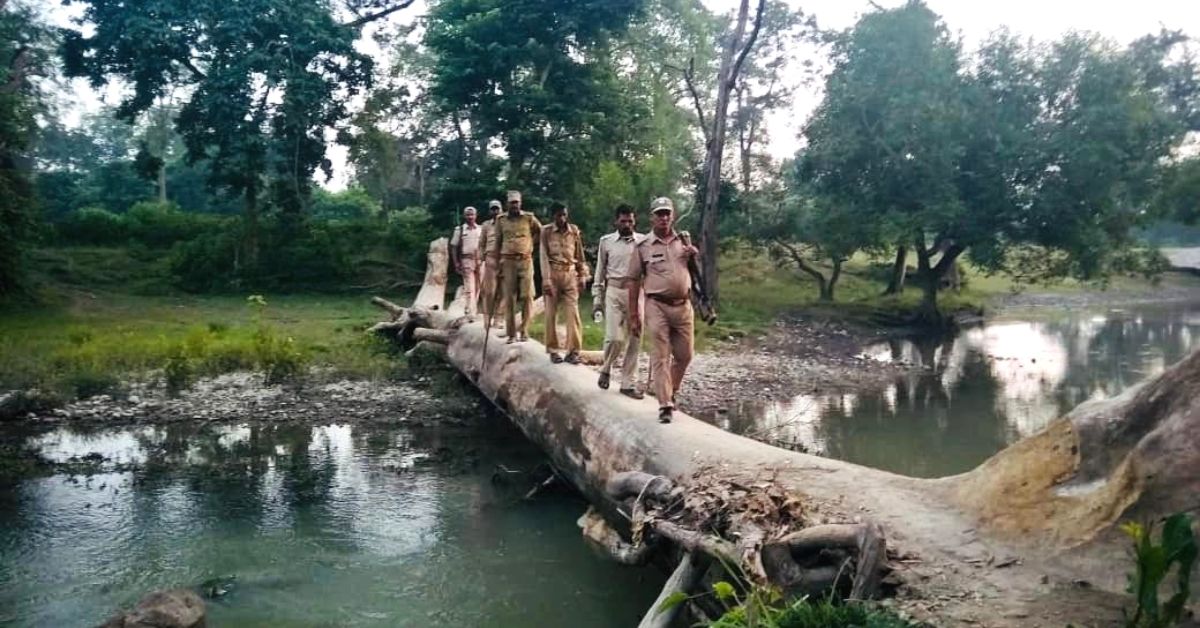 “Many forest guards were apprehensive because it would track their walking routes, and the time they spent in the forest. But I convinced them that the app was not to punish the non-performers but to reward the good workers.”

The forest can be a dangerous place. Not only for the unfamiliar visitor but also for the vulnerable animals. In a tiger reserve as dense and vast as Dudhwa in Uttar Pradesh, the risk of illegal wildlife poaching is especially high.

Considering the complications of poaching and the high-risk jobs of forest officials, IFS officer Ramesh Pandey introduced a mobile application in his department to phenomenal results.

Within a year of its introduction, M-STrIPES, which stands for Monitoring System for Tigers-Intensive Protection and Ecological Status, has been instrumental in catching 200 poachers in a patrol field that covers 2,50,000 km!

The Better India spoke with Pandey to get a better sense of how a mobile application was the catalyst in decreasing poaching activities in Dudhwa.

“The model of M-Stripes was developed by the National Tiger Conservation Authority (NTCA) in 2010. However, it was only in 2018 that it was transformed into an app. That made things easier for field officers, and I decided to utilise it in Dudhwa. India is home to close to half of the world’s Tiger population, and it was in our hands to protect them. And if an app was going to help us, why lose the opportunity?” Pandey says.

One can imagine the difficult work of a forest guard. They have late and long working hours in the jungle where carnivores like tigers and bears, as well as vulnerable herbivores like elephants, live. Even a slithering snake could prove fatal while the guard is patrolling the jungles. However, patrolling is an essential part of their duties.

Pandey tells us that one stumbling block at the very beginning of M-Stripes’ journey was the fact that the forest guards, working in the forests for years, were accustomed to working with a stick and a walkie-talkie.

Most were not very comfortable with technology, and some had also gone down the slippery slope of avoiding work altogether. But, the IFS officer was determined to make this initiative work.

“In June 2018, I introduced M-Stripes in Dudhwa. Many forest guards were apprehensive because it would track their walking routes, and the time they spent in the forest. But I convinced about 15 of them that the app was not to punish the non-performers but to reward the good workers and I wasn’t lying. It is essential to recognise those who do their job in earnest,” the 49-year-old official says.

If you use mobile applications frequently, it is very easy to understand the app. It basically tracks the user’s route using GPS.

The user can also upload photos and selfies on the app’s database, which solves two purposes—help authorities track who goes in the forest. Secondly, clicking photos of pugmarks, animals, birds, and reptiles shows how specific species are thriving in their territories.

The authorities, like Field Director Pandey, would track these activities to know who was working in the forest at what time.

“Say 40 people are using M-Stripes and everyone is doing 20-30 rounds a month. Once we get all the data from their phones, we check the number of rounds, hours and times of day.

From that, we understand if there is an unpatrolled gap and try to fill it,” he says.

What began as an initiative for 15 people, soon spread like wildfire. More forest guards understood that the tracker was getting them recognition for their work, along with improving the forest they loved so dearly. Soon enough, they downloaded and used the app diligently.

Today, the number stands at nearly 200 users! The authorities, on the other hand, have reviewed the records of these officers every day since June 2018!

Sharing his thoughts on poaching in Dudhwa, the IFS officer says, “When it comes to poaching tigers for their skin, rhinos for their horns or elephants for ivory, the wrongdoers are not just underprivileged individuals trying to make ends meet. They are a part of a nexus that is paid by extremely wealthy people to kill animals for a shallow benefit. And so, it is imperative that we take strict action against them.”

Among the hundreds of poachers, was also international golfer Jyoti Randhawa who was caught with a .22 rifle fitted with a silencer, 80 cartridges, as well as wild animal cartridges.

Gradually, machaans (cottages) were also built in Dudhwa to encourage tourists to keep a strict vigil in the forest. Together, the consistent patrolling resulted in the identification and capture of 200 poachers!

Sharing his thoughts on poaching, the IFS officer says, “When it comes to poaching tigers for their skin, rhinos for their horns or elephants for ivory, these poachers are not just underprivileged individuals trying to make ends meet. Rather, they are a part of a nexus that is paid by extremely wealthy people to kill animals for a shallow benefit. And so, it is imperative that we take strict actions against them.”

From the outside, it seems unlikely that a mobile app can help capture poachers. But the numbers recorded in the last year speak for themselves. Although poaching is a topic of debate among conservation experts, IFS Pandey believes that putting an end to wildlife poaching is a crucial step in the protection of wild habitats. With M-Stripes, he is ensuring this and how!