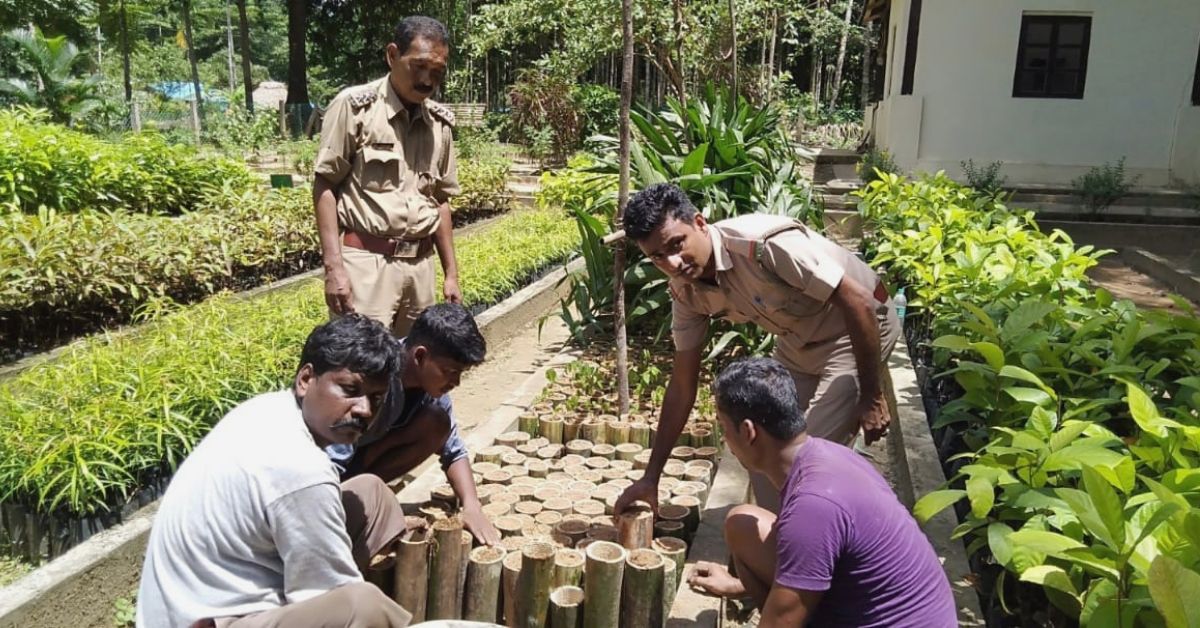 Thanks to IFS Vipul Pandey, the dept. is now utilising discarded bamboo stems to replace plastic planters and has enough to plant another 20000 saplings. Time for other forest departments to borrow this ‘leaf’!

Back in school, we would have an annual tree plantation programme. Students would form groups to plant saplings either in the school premises or a hilltop nearby. The trips would be very well-organised, with every student in every group responsible for a specific task like fetching a sickle, the water can, and the saplings, usually in a plastic bag.

At the end of the day, we would collect all the plastic in one big bag.

We were all children, following what the teachers instructed us to do but even then, we understood that there is something wrong with so much plastic being involved in a tree plantation programme.

Let your plants breathe easy in the pots they grow, and at the same time, decorate your house in an eco-friendly way. Buy beautiful hanging plant holders on The Better India Shop here.

A recent initiative by a civil servant working in the Andaman islands brought this childhood memory back to me. Vipul Pandey, an IFS officer, working as Assistant Conservator of Forest, in the South Andaman Division since May last year, has made it a point to exchange plastic bags with bamboo pots to grow saplings in one of the nurseries in Jirkatang village, under his division.

“There was too much plastic surrounding us. It started with the nursery with thousands of plants and eventually, I knew it would end up in the oceans.

“When I raised this concern, my staff echoed my worries and told me that they too wanted to get rid of the plastic. They just didn’t know how,” the IFS officer tells The Better India (TBI).

A year ago, in June 2018, the Gujarat Forest Department (GFD) too had similar worries and they started an eco-friendly initiative wherein they planted all their saplings in coconut shells.

You can find the details of this initiative here.

Taking inspiration from the GFD’s idea, Pandey too experimented with this but as he soon discovered, the plants at the chosen nursery in Jirkatang did not grow very well in such shells. So, the IFS officer had to try something different.

For the next seven months or so, he experimented with various materials, trying to understand which of those could nurture the saplings the best, how they can be conveniently replanted and how much the environment is affected by it. At last, about a month ago, he finalised bamboo as the perfect solution.

“For the first batch of these pots, we got hold of 500 bamboos that were cut off from the stem and discarded. This was the perfect start,” Pandey says.

He further explains that they tested the bamboo pots before planting hundreds of saplings in them. A year after the saplings are planted in the bamboo, the eco-friendly pot opens up from within, allowing the roots to expand. It is only after this that the nursery sells the saplings for replantation.

“The roots of the saplings do not get coiled. While replanting them, one needs to give a sharp hit to the bamboo stems, just like one does in case of the plastic pots. But the best part is that the bamboo can be reused for another sapling. Even if it breaks, it can simply be discarded and it will decompose. We are still trying to experiment with different species of the grass and for more purposes.”

Along with forest guard Tanveer, the IFS officer has used bamboo pots to plant 500 saplings so far and informed us that they have enough bamboo to take the number to 20,000. But this will happen over the next few months. For now, the forest department is taking steps to become more eco-friendly and “shoot” upwards.