"Why should the bad days pull you down? There’s no shame in struggling till you achieve your goal. In any case, I am a son of a labourer and I have learnt from them to work hard towards my goals," says Ramjal Meena, who has been studying while working nightshifts as a guard.

Empty stomachs and equally empty pockets bind lakhs of farmers and daily-wage earners living in the villages of India. Life does not come easy to those who work their entire lives filling the belly of the nation, and go to sleep hungry themselves. To earn a pittance, village children have to abandon their dreams of sitting in a classroom and pick up farm tools or go to cities in search of work to send money back home. And for those who want to challenge their fate, there lies a long road of constant struggles.

He migrated to Delhi from Rajasthan in search of a livelihood. Having been married off at a young age, he had to leave his studies to look after his parents and his wife.

Speaking to The Better India (TBI), Ramjal shares, “It was in 2003 when I was got married at just 18. I was pursuing my BSc degree but had to give it up. There were two reasons for this. Firstly, my parents were old and could not work anymore to feed our family. Secondly, I had to provide for my wife too. It was decided that I abandon my education and focus on earning instead.”

Ramjal has been working as a security guard at the Jawaharlal Nehru University (JNU) in Delhi since November 2014. Though he had to leave the education he had always wanted to acquire, the vestiges of the long-abandoned dream remained somewhere in his heart.

And Ramjal chose to rekindle the flame and fight his destiny.

Soon, the conscientious student would start his course in the same college where he works as a security guard.

Ramjal’s voice becomes heavy with emotion when he speaks of his struggles, “For two years, I did labour work and kept looking for a steady job. It was only in 2005 that I got a job as a security guard with a salary of Rs 3000 per month with which I had to take care of my entire family.”

Neither the low salary nor the time crunch could deter Ramjal from his goal of studying. He bought second-hand books and took them to his workplace. Often, the senior employees where he worked scolded him for studying during his working hours.

It took a few years for Ramjal to settle down with this income. It was then that he applied for and completed his Bachelor’s degree from Rajasthan University via the open learning system. But that wasn’t enough for him.

“I managed to get a degree from the University while juggling the responsibilities of my job and home. But that was never the aim. I always wanted to study at a regular college, like a regular student. I knew that I would realise this dream someday. But the fact that it would take 16 years was something I never thought of,” says the 33-year-old.

After completing his graduation, Ramjal, who was still in search of a better paying job, landed the security guard post at JNU for the night shift. He made it a point to carry his books and study during whatever free time he could find.

“I have three children and my wife is a homemaker. We live in a small house in the Munirka village near JNU. 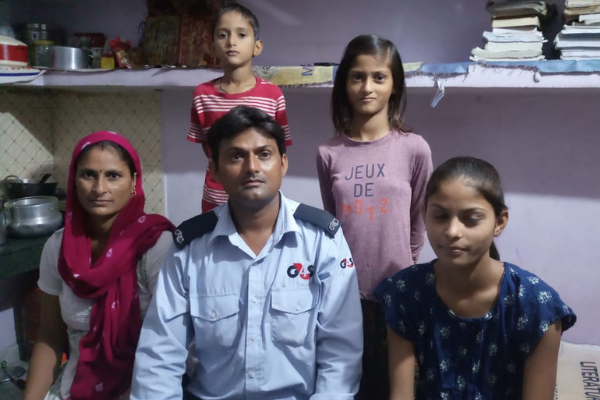 When I am at home, I lend a hand in the domestic chores and also help my kids in their studies. I had no option but to study while on my shifts. There was no other time for me during the day. Of course, it was difficult in the beginning, but now I have learned to manage my time.”

Ramjal earns Rs 15,000 per month. After Provident fund (PF) and tax deductions, he is left with Rs 13,000 in hand. “Delhi is a city that gives a poor person generously but also takes away from him. Of the Rs 13,000 I earn, Rs 5000 go toward my house rent, and the rest is spent on the kids’ education, and food etc. My wife and I spend as little as possible on ourselves. I am confident in my hard work, and I know that these days of poverty too will end,” he shares.

You may also like: 76-YO Runs Delhi’s Only Free ‘Auto Ambulance’, Has Saved Hundreds Since 1978!

Ramjal always wanted to prepare for the UPSC exams with the hope to become an IAS officer. He also appeared in two entrance tests of Rajasthan government services and even managed to pass the prelims, but unfortunately, he could not make it to the merit list.

But he is not one to give up easily.

“Why should the bad days pull you down? There’s no shame in struggling till you achieve your goal. In any case, I am the son of a labourer and I have learnt from them to work hard. Now there are only two aims in life. I want my kids to get a good education, and I want to complete my studies too. It doesn’t matter how hard I have to struggle, I will ensure I achieve these goals,” Ramjal says confidently.

Written by Manoj Jha, this article was originally published in The Better India Hindi.