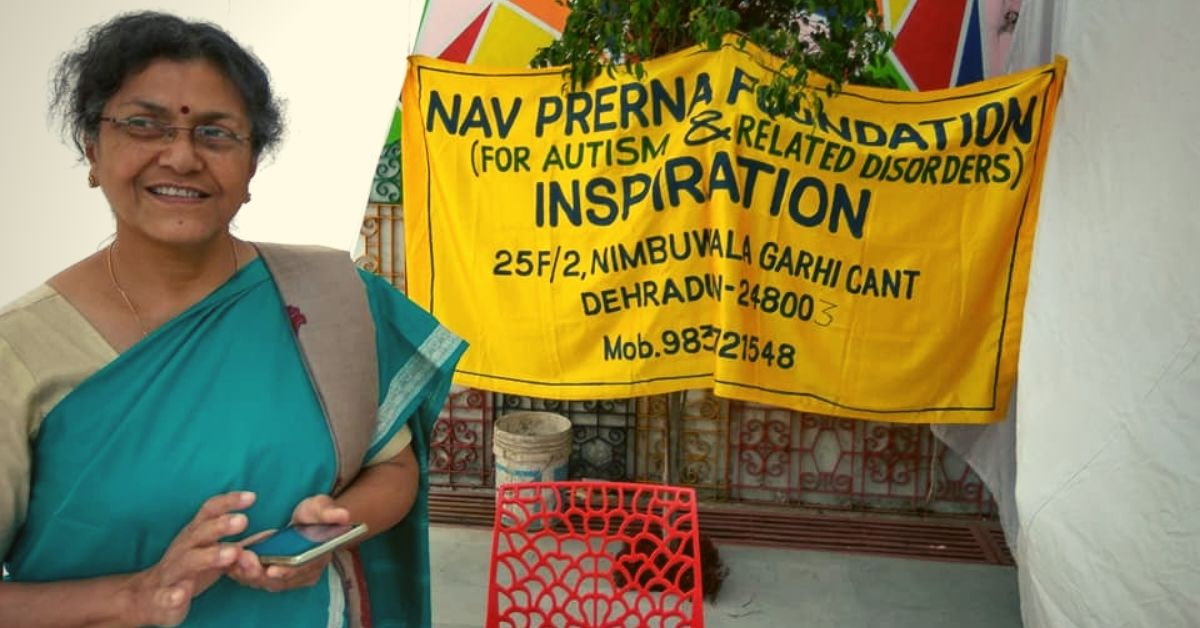 “I was pregnant with my daughter, when my son was diagnosed with ADHD. For the next four years or so, no doctor even mentioned the possibility of Autism, so when I heard this, it shattered me. I remember crying uncontrollably for the next few days, but I was not ready to let that fail me. Instead, I was stubborn and changed my problems into my strength! And my daughter, Prerna was instrumental in this,” she shares.

When faced with rejection, different people react differently. While most of us curl up in the darkness to escape the sadness and pain, only a few take a step back to contemplate and come out stronger than ever before.

Saswati Singh is one of those few.

A teacher, a mother and a fighter, Saswati has had to face rejections several times in her life, but each time she took it as an opportunity to pick up the pieces and create something beautiful and substantial. The pièce de résistance of her creation is the Dehradun-based Centre and Group Home for Children & Young Adults with Autism or other developmental challenges.

Run under a trust, called the Nav Prerna Foundation, the centre not only provides a safe space for these individuals but also gives them an opportunity to tackle the challenges they face to help them lead fulfilling lives.

“The awareness about Autism and other learning disorders is still very scarce in several parts of the country, even in metro cities. In the case of children, parents and schools often confuse it with a speech problem, pushing them into numerous speech therapy sessions. But, a person with Autism has the potential to learn all the words in the dictionary, but might face difficulty in engaging in a proper conversation,” says Saswati, while speaking to The Better India (TBI).

This is a woman of grit, who dedicated 24 years of her life to the cause, working with more than 2,000 children and young adults with developmental issues. Additionally, by spreading awareness and training programmes, she has left a positive mark on more than 15,000 individuals. And, her journey so far has been nothing short of inspiring!

A tumultuous journey for a rewarding cause

Known for her stern yet loving persona, Saswati shared one of the most significant setbacks of her life, which she, with her efforts, has now transformed into a victory!

“During the delivery of my first child, there were a few complications. My son had suffered from asphyxiation, and I was scared that we both might not survive. For the next 15 days after delivery, he was kept in the ICU. Slowly I regained hope when he got better after five months, and we decided to move him to Delhi. But the weather change made him worse, and on the very next day of reaching the city, he had to be hospitalised. Even after he got better a few years later, at the age of four, he contracted fever and had to be hospitalised where he suffered two massive attacks of epilepsy in one month.” she shares.

These two massive traumas to the brain and body, pushed him into Autism, causing him to forget even his name for some time, tells Saswati. Although, before this, he was attending a regular school as a neurotypical child and had successfully developed his speech, Saswati would often be worried about the fact that he was extremely hyperactive.

“I could sense that something else was also wrong. He was extremely hyperactive, and despite telling the people around me of his hyperactivity, no one would take it seriously. Due to this, schools and teachers would complain, but I had no help recognising my son’s problem,” adds Saswati.

Also Read: What My Autism Heroes Taught Me: A Paediatric Occupational Therapist’s View

Owing to her son’s hyperactive nature and severe behavioural issues, schools began to reject his admission. Saswati recalls how 42 schools in Delhi rejected her son.

However, after a lot of struggle, a special educator came forward to help and suggested her to check for Autism in her son. It was then, at the age of eight, that her son was diagnosed with Atypical Autism by Dr Reeta Peshawaria from the National Institute of Mental Handicap, Secunderabad (NIEPID).

“I was pregnant with my daughter, when my son was diagnosed with ADHD. For the next 4 years or so, no doctor even mentioned the possibility of Autism, so when I heard this, it shattered me. I remember crying uncontrollably for the next few days, but I was not ready to let that fail me. Instead, I was stubborn and changed my problems into my strength! And my daughter, Prerna was instrumental in this,” she shares.

With this knowledge, she then decided to quit her job of a senior biology teacher, and dedicated her time to home-school her son, while educating the city about Autism.

“I remember meeting the principals of prominent schools and explaining and sensitising them about Autism. It was alarming to see how low the awareness was even among top educators and how this had hindered the right to education for so many children. I knew I had to do something,” says the 63-year-old.

Taking notice of the situation, she then decided to change it by starting a school of her own. “This school was to allow these children to grow up among peers while overcoming their respective conditions,” she adds.

A school for ‘Inspiration.’

Saswati’s strides to spread awareness about Autism revealed a grim reality. Every time she met an institution head, she would ask them to share the data of all the students rejected due to various behavioural issues of developmental disorders.

“I began the school in 1995, at my flat in Delhi. As the awareness about such schools was still very low, I started reaching out to the parents of students who had been rejected like my son. Initially, the response was really low. I started with just three students, but with the help of friends, the number increased to 12 in a year with a long waiting list. I realised that the school could not function in the confines of my apartment anymore and that I had to move,” shares Saswati.

It was then that she registered a social organisation, Inspiration, in 1996, and approached Kiran Bedi, the then Special Secretary to Lieutenant Governor of Delhi for help. Looking at the promising work Saswati was doing; she was finally allotted space at the Community Centre in Tilaknagar in 1998.

The school now has 80 students receiving education and being taken care of by mothers just like her.

Meanwhile, her work back in Delhi had received wide appreciation, owing to which Maneka Gandhi, the then Minister of Women & Child Development selected her to visit various welfare organisations in Japan as the General Secretary of PARIVAAR – National Confederation of Parents Organisations (NCPO). This was followed by a visit to Washington DC in 2001 to represent 13 countries of Asia-Pacific for Special Olympics.

In the same year, she also enrolled for the Son-Rise Program at the Option Institute, Massachusetts, where she first learnt about the Gluten Free and Casein Free Diet (GFCF), an essential aspect of her later work.

This international exposure was an eye-opener. Not only did it show the awareness in the West, but also opened up her mind to expanding Inspiration’s scope of work. This was one of the reasons paving the way for Inspiration’s journey into becoming Nav Prerna Foundation in 2010.

After running the school for some ten years in 2005, she decided to move to Dehradun. “It’s just a few hours from Delhi and its overwhelming pollution and population, but it made a huge difference, especially in helping my son, who was around 16. Since then, I have noticed how the surroundings here help in making considerable improvement in persons with Autism,” says Saswati.

So, finally, five years after setting up the centre in Dehradun, under Inspiration, she expanded the scope of the institute by setting up the trust, Nav Prerna Foundation.

The main focus of the home is to facilitate a holistic approach toward Autism through behavioural therapies and a GFCF diet. And, she adds that her methods have not only helped individuals overcome their behavioural challenges, but has also been able to empower them into learning various vocational and self-help skills for an independent future.

“I make no claims of treating Autism. As of now, there is no known cure for Autism, but with my knowledge and research, I have been able to help them have quality lives. Their conditions should not dictate their futures,” she adds.

Elaborating one of the primary methods she follows, the GFCF diet, Saswati, who is a microbiologist, says, “The GFCF diet is very strict and forbids the consumption of dairy or gluten products found in many foods including wheat. It might be a problem initially for many parents to envision this, but I have seen how this can help. Most of the individuals with Autism have gastrointestinal issues, and intake of foods like wheat, junk food, kidney beans, etc. that are difficult to digest, often remain in the body in semi-digested forms. This causes a haze or fog in their brain making the symptoms of Autism even more difficult, thus increasing episodes of hyperactivity, aggression and emotional meltdown,” explains Saswati, whose diet plan instead includes healthy foods like millet, controlled quantities of rice and greens. She adds that the diet needs to be followed for at least a year for significant results.

However, apart from this, another significant aspect of the therapy is also to include families, especially mothers and siblings.

“It’s important for mothers to take charge of the well-being of their children. I learnt it the hard way, and so I make sure all parents coming to me for help, especially mothers, are well informed about their role in the process. They cannot be isolated or be away while their children are undergoing these therapies. It’s a huge effort to help these individuals be the best of themselves, and like in any other family, each member, including siblings, have to be fully invested in the process,” says Saswati.

Today her son, at 31, and her daughter have grown up to be strong individuals who support her at every step of the way. With these two by her side and the thousands of children she has helped, Saswati’s life is an ode to motherhood!