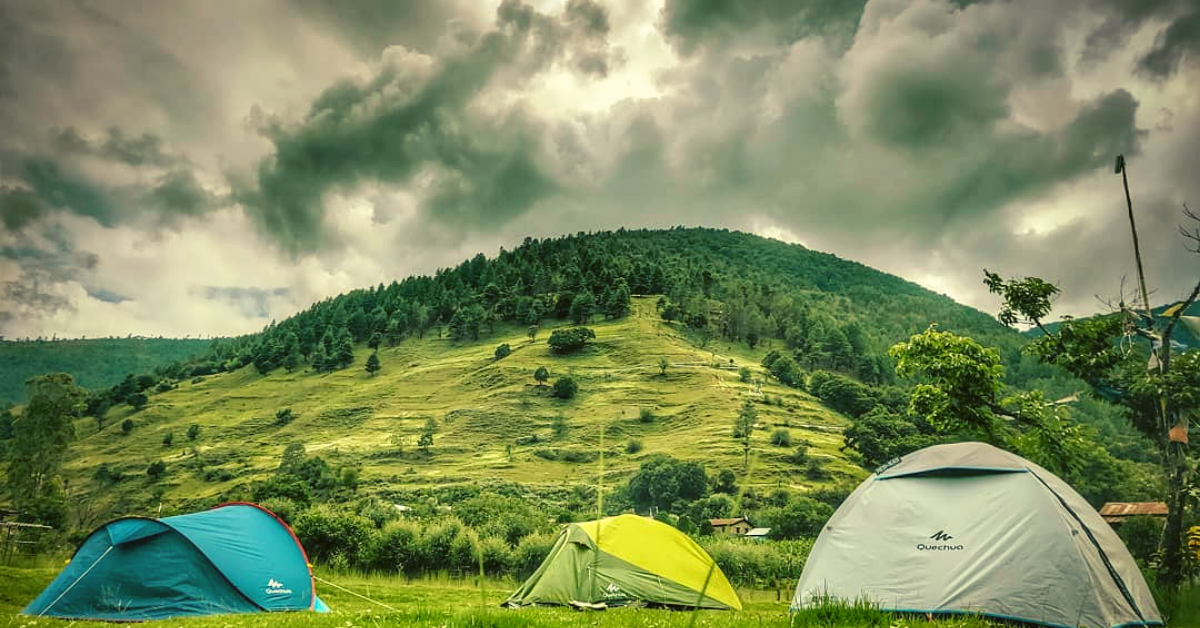 From the daunting labyrinths of Talatal Ghar to a unique village know as the ‘Manchester of the East’, these incredible destinations are sure to take your breath away! #TravelTales #Wanderlust

The tall trees tower over the jagged rocks and cut through the cluster of clouds that fly across the zig-zag roads guiding you upwards, through an incredibly thrilling experience.

You follow through the treacherous landscape all to reach a summit and pause.

What you see now defies description—a breathtaking bird’s-eye view of the world which is full of undisturbed beauty!

This is the exact feeling I get, every time I make my mind to hit the high altitudes of the Himalayas.

But, the mighty ranges lining the Northeast regions of India, have a lot more to offer.

Dotted with varied communities, cuisine and cultures, here are five hidden gems that have to be in your bucket list!

1) Sualkuchi, Much more than Manchester of the East

The usual picture of Sualkuchi emerges wrapped in silken threads, rhythmically rattling incessantly on the traditional throw-shuttle loom. Almost 30 km away from Guwahati, this little town for centuries has been known for its distinct style of weaving, earning it the sobriquet—Manchester of the East.

However, even if you are not a textile enthusiast in pursuit of the lustrous drapes, Sualkuchi will not disappoint you.

The town, known for its rich heritage and culture, offers an array of wonders dipped in fascinating history, folklore and colourful festivals.

One such prominent event you should not miss is the boat race, locally known as the Naw Khel.

Held in the memory of Srimanta Sankardev, the 16th-century Assamese polymath, the race involves thousands of people from across various religions participating and competing with infectious zeal and enthusiasm.

The colours and the pulse of the event is truly something worth experiencing, at least once!

Mizoram, nestled in the southern tip of the north-east, is gifted with nature’s bounty and a rich culture. Yet, amid its picturesque landscapes, what stands out is the humility and honesty of its people.

It is this unique quality that gave birth to a novel kind of grassroots commerce—Nghah Lou Dawr, meaning, ‘shop without shopkeepers’—a paragon of trust.

Lined along the highway of Seling, a small town 65 kilometres away from Aizawl, these shops sell freshly harvested produce from the farms, while thriving on the honesty and integrity of consumers.

One could find fruits, flowers, vegetables and other organic produce kept along with a rate list and a container for the customers to put money in.

In case a customer does not have the exact amount, he or she can even pick up the change from the money-collection containers, also known as pawisa bawm or pawisa dahna. What’s pleasantly surprising is that this procedure actually works!

“We trust them; they have never failed us. Nothing has ever been lost from our shops, says one of the shopkeepers to The Better India.

If you are a history buff or love a good hide and seek game amid complicated labyrinths, Talatal Ghar is your place!

Known for its stellar design, it is one of the few examples of Tai Ahom architecture that originated in the Brahmaputra valley of Assam.

Built like an army base in erstwhile Rangpur (present-day Sivsagar) in Assam, the monument is characterised by two secret tunnels that run beneath the humongous structure connecting to the Dikhow river and Ghargaon palace, respectively. These tunnels were used as escape routes during enemy attacks.

The overall structure includes a total of seven floors in addition to the secret floors, which however are now restricted to visitors. Although hearsay, many claim that the tunnels were shut down after the people going in, never returned.

4) Hop from one country to another, literally!

“One day there will be no borders, no boundaries, no flags and no countries and the only passport will be the heart,” is what Carlos Santana, an American-Mexican guitarist, had once said.

In today’s world, his words might paint an image that is too good to be true. But this small village in Nagaland is an exception.

Tucked away in the uncharted territory of Mon district, 42 kilometres away from Mon town, a sleepy village, Longwa has an intriguing legacy—all its people enjoy dual citizenship of India and Myanmar. This is because the Indo-Myanmar border passes right through the centre of the village, and to be precise, through the house of the village chief, dividing it into two halves!

This gives you the unbelievable experience of being in two places at the same time, with one foot in India and another in Myanmar!

5) Andro, The Village of the People Who Returned

Shrouded in fascinating stories of the ancient past, this village cradled in the foothills of the Nongmaiching range is one of the few places in the country that can boast of a rich in tribal culture.

According to the locals, the name of the village comes from the word ‘handro’ which in their local language means ‘the village of the people who return’.

The name borrows its existence from the local folklore, where Lois, a prominent community in Andro were once driven out by a ruler only to return later to reclaim and rebuild their lost land. They were one of the earliest settlers of Manipur.

Interestingly, the village also has an ancient temple, Chakpa Panam Ningthou Meithoupirol Shanglen or Mei Mutaba, that plays a crucial role in Manipuri folklore. Dedicated to the governing deity, Panam Ninthou, it houses a sacred fire that is said to be burning continuously since the first time it was lit, by Poireiton, the King of the Khuman clan, around the 1st century AD. The temple, the fire and village today stand as a living testimony of Manipuri civilisation!

A region as diverse and unexplored as this is any traveller’s dream come true. So, now with this list in place, get ready to hit the hills soon