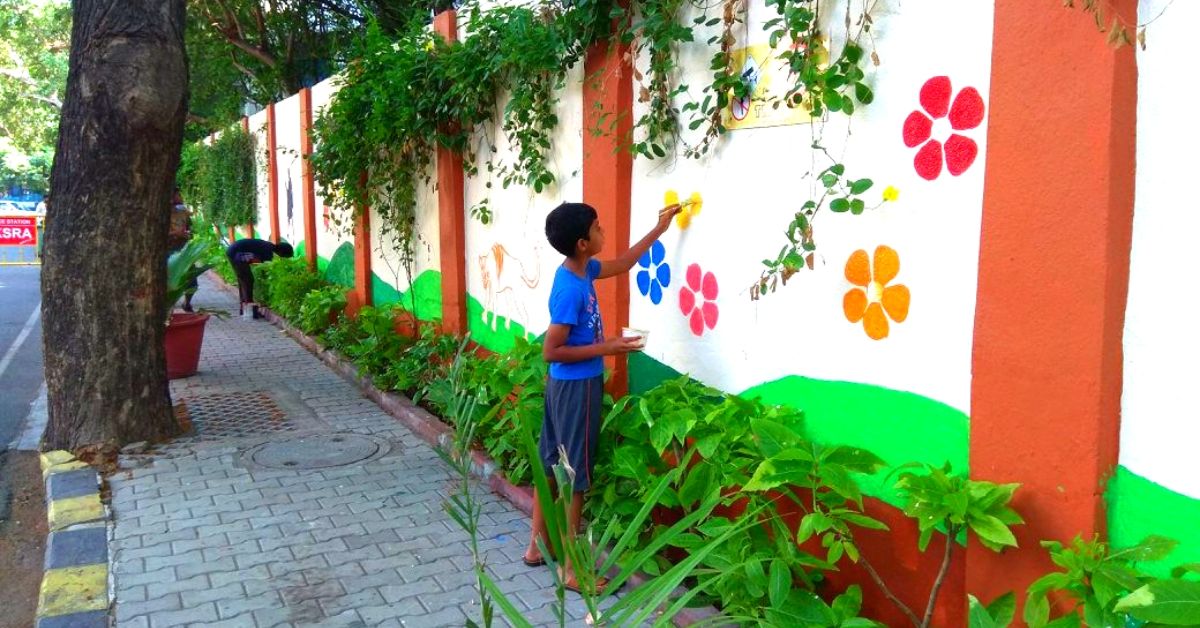 Every home on the street segregates its waste. While their wet waste is processed into compost every quarter, plastic waste is collected and recycled.

A resident of the Thiruveedhi Amman Koil Street, K L Bala, recalls how his friend and secretary of the residents’ welfare association in the area, knocked on every door in the locality. It was a combination of flats and individual homes in Chennai’s R K Nagar, which houses 80 families. He mobilised them to step out, greet each other and break the ice.

“Prior to this, people and their lives were restricted to the four walls of their own homes. Many who had lived there for the better part of their lives were clueless about their neighbours! So, we all got together and held several meetings. We decided to identify priority issues for our street and work on the solutions together,” he tells The Better India.

The issues were many—innumerable automobile shops turning the street into a repair hub; visitors parking their vehicles without permits for endless hours; a broken platform that was poorly maintained; strewn garbage and open defecation—the same as any other urban colony.

And so, the residents came together to bring about change and reclaim their street.

Cut to 2019, the Thiruveedhi Amman Koil Street Residents Association (TAKSRA), was recognised by the State Government for its many environmentally-conscious initiatives. It bagged the Pollution Control Board’s Green Award, presented by Chief Minister of Tamil Nadu, Edappadi Palaniswamy.

Every home on the street segregates its waste. While their wet waste is processed into compost every quarter, plastic waste is collected and recycled.

Generating more than 12,000 kg of manure annually, the society has not only managed to get rid of the abandoned vehicles that encroached its street but has now converted the stretch into a blooming garden which has a combination of flowering potted plants, lush trees, and intricate creepers. An old school compound was being treated as an open defecation spot, was reclaimed and painted with colourful art and portraits of inspiring personalities.

And it doesn’t stop there.

Apart from having rainwater harvesting in each of its buildings, TAKSRA also created a recharge well for water conservation. It follows drip-irrigation for its street garden and is now working on implementing grey water recycling soon.

The Better India caught up with one of its active members, K L Bala to know how these 80 households got together to create a sustainable street and move one step towards a greener tomorrow.

“We started slowly. One of the major issues was the vehicles. So we worked with the traffic department and put up no-parking boards on one side of the street and created parking space for residents on the other side. Then, also educated those who had encroached the space. After sustained efforts, we were able to clean it with a group of 30 volunteers. We also fixed a broken platform with the help of the corporation and revived the sidewalk by planting an array of herbs, flowering plants, and creepers.”

The society’s next step was to adopt a bin-less model and send as little waste to the dump yard as possible. One of the first steps towards this was to adopt waste segregation in every household. They also set up common compost pits for all the dwellings to process wet waste (vegetable waste, dry leaves, flower waste, etc.).

Following a three-month composting cycle, the association generates 300 kg of compost per cycle which, when multiplied by ten buildings, is 3,000 kg. In a year, the total manure produced comes up to a whopping 12,000 kg!

A major part of this manure is used for the street garden, and the excess is sent to the corporation’s dry leaf composting unit at a park in the vicinity.

The street garden is a unique space. The residents have innovated by using recycled tyres as pots by painting them, as repainted tyres do not attract mosquitoes.

Another addition is that of a gardener, specifically employed to promptly water, manure and trim plants in the street garden. To ensure water efficiency, a drip irrigation system is used for the street garden. Connected with multiple buildings through pipe connections, the building that has surplus water facilitates the process.

The society also generates 20-30 kg of plastic waste per week. It has collaborated with Kabadiwalla Connect to set up a bin where all the residents collect their plastic waste and send it for recycling. It is also now working on awareness drives to reduce plastic usage.

What has been the net result of this initiative? Three bins on the street have been removed. The space that was once consumed by big community bins, now has blooming flowers and creepers. Apart from its biomedical waste, the society has cut down the waste it sends to landfills.

Additionally, they fixed streetlights and set up CCTV cameras, along with a police booth.

“More residents are making use of the street as a walking space now. They also make it a car-free zone on Sundays to allow the kids more space to play,” says Bala.

Once every quarter, TAKSRA holds an e-waste collection drive. It attracts residents as well as people from areas as far as T Nagar and Adyar. This is done in collaboration with Chennai-based WasteWinn, a company that offers zero-waste solutions. Once the collection bin is full, the e-waste is transported to a Tamil Nadu Pollution Control Board (TNPCB)-approved dismantling unit in Porur, called Tritech Systems.

“Our street has become a role model, and we are now helping others adopt it. We are a part of the larger colony called R K Nagar, so we have now mobilised people to form 4-5 such groups on different streets. The change reflects in the fact that they now want to compete with us. We are coordinating with resident associations on the ward and zonal levels. Secretaries of the respective association and government officials are added to a WhatsApp group where we share the best practices and issues for quick redressal.”

TAKSRA also worked with the traffic department and other non-profit organisations to transform Sringeri Mutt Road. Once known for road safety issues, a den for illegal activities, open defecation and unsafe, it has now transformed into a pedestrian-friendly street.

Vision for the future

A few other projects in the pipeline include grey water recycling to water the garden. While the model is on the verge of completion in Bala’s building, it will soon be replicated for other dwellings.

They are also exploring the use of solar energy for street lights and lighting up common spaces within the buildings.

When asked about winning the Green Award, Bala beams, “One of the reasons we won the CM’s award was that we voluntarily formed a group to adopt a sustainable model, although we were not a gated community, with the power to enforce rules. We are constantly on the lookout of newer innovations. People, as well as associations, refer to TAKSRA as the best model, and we aim to live up to that expectation.”

He signs off, “Our next plan is to invite more birds into our neighbourhood and make it more lively. We are experimenting with different species of plants to attract them.”

We hope that other societies can take a leaf out of TAKSRA’s book and replicate the model in their neighbourhoods.

If this story inspired you, get in touch with TAKSRA on their Facebook page here.