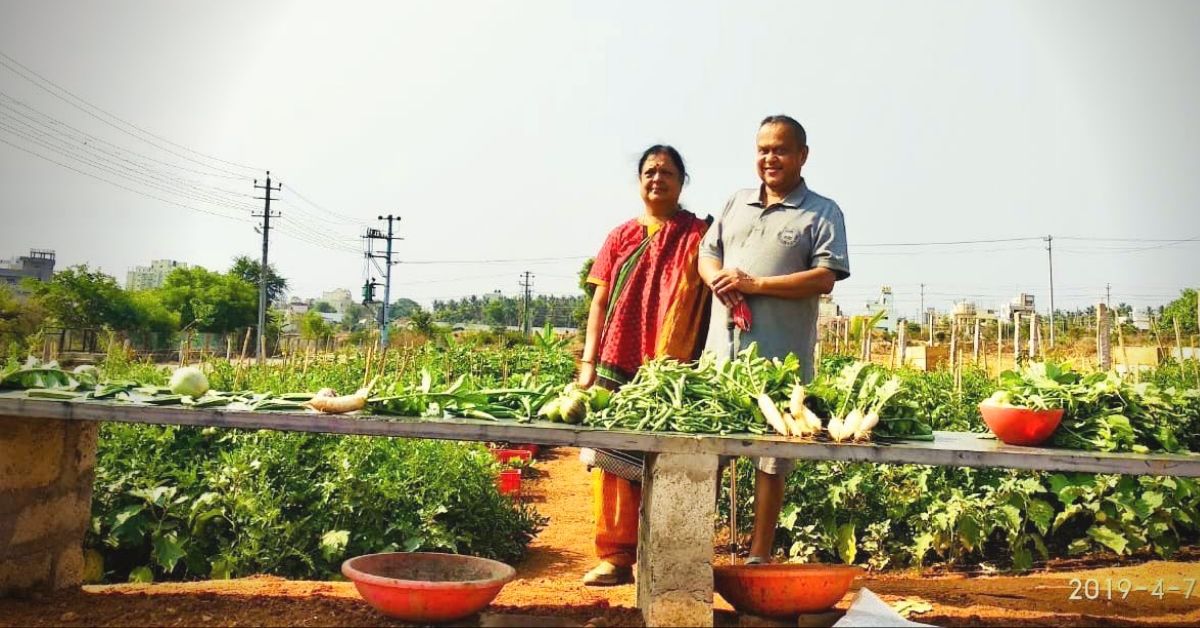 Harish and his bunch of friends harvest nearly half a ton of organic produce — this includes more than 100 varieties of fruits, herbs and vegetables! #EatSafe #GrowOrganic

Editor’s Note: The article originally indicated that Harish Mysore worked on 14,000 acres of land. This was a misprint and has been corrected. I apologise to our readers for the error.

For Harish Mysore, it is all about making choices that benefit not just the self, but everyone around.

And that’s one of the reasons why this 67-year-old moved cities from Bengaluru to Mysuru.

“I have been passionate about gardening since childhood. In the past six decades that I have lived in Bengaluru working as an engineer, I managed to build a terrace garden from scratch and maintain it. But after retirement, I knew that I needed more. It was a dream to move to Mysuru, a cleaner and less congested city, and that came true in March 2018,” said Harish, while speaking to The Better India (TBI).

The overwhelming traffic and pollution were a few other reasons for his migration. “We wanted to live a toxin-free life and help others do that as well. So it was decided that we will move to a place with cleaner air and grow our food organically,” he adds.

As a result, after moving in 2018, they decided to utilise some land near Mysore Ring Road to build their dream garden.

In the next nine months, with the help of relatives and friends, Harish and his wife managed to transform 14,000 square feet of land into a fully-organic farm that boasts over 300 varieties of fruits, herbs, vegetables and flowers.

“I have had some experience with on-ground and terrace gardening, but working on such a big land is a different ball-game altogether. So we reached out for help and hired a full-time gardener and slowly began the work in January 2019,” he shares.

Parallel to the preparation of the soil, a green living fence was also created with vine-based vegetables like double beans, broad beans, pumpkins and passion fruits planted along its length.

To keep things in order, the huge farm has been divided into parts.

“We are also growing around 50 varieties of cashew nuts on either side of the garden entrance. We have tried to grow as many varieties of plants as possible, thus enhancing the biodiversity of the place,” he says.

After almost six months of hard work, Harish now grows 300 varieties of plant species that include vegetables, fruits, herbs, greens and flowers. One hundred varieties out of these have harvested half a ton of produce so far, he added.

A passionate gardener with substantial experience, Harish uses home-made organic traditional fertilisers to nourish his plants. “We make our own Panchagavya and Jeevamrutha at the garden and are regularly feeding organic matter in the form of dry leaves, cow dung, plant and vegetable waste etc.

A garden full of different types of earthworms which will convert organic and biodegradable waste to vermicompost makes the soil healthier.

He adds that to improve soil quality and reduce weed growth, he grows Amaranth plant at the base of each plant as a way of natural live mulching. “Not only does it protect the tree saplings from heat and weeds, but also produces two sacks full of edible greens high in nutritional value, every single day. We send this harvest to a nearby hostel mess for students, free of cost,” Harish says.

However, the garden is not the only project Harish has his hands on. In his efforts to make Mysuru greener than ever, he also volunteered to work on 1.25 acres of public park and the common area of a complex close to his farm where he hopes to grow 300 trees and has managed to plant around 50 till now. But, that’s not it. Taking his efforts a notch higher, he also planted some 60 trees in the area and hopes to increase it in the coming years.

“What’s the point of growing an exclusive green haven when the world around you can be rotting in pollution. It’s a chain effect, and I am doing whatever I can to improve the situation,” says Harish, who spent almost seven lakhs in these past months to make the area green.

Open to all, his garden stands as a stellar example of individualistic efforts reaping the collective benefit.

For instance, the produce harvested from the garden is much more than Harish and his wife can consume, and so he gives away the surplus to people in his housing complex or beyond.

“It was not meant for commercial purposes, and so I distribute the extra for free. But recently, people have been asking me to attach a price tag so that the room for hesitation on asking more is eliminated and they get to buy as needed. So now, based on the benchmark on rates charged by online grocery portals, I set a nominal cost for the items,” he said.

He believes that while efforts can be at the individual level, outcomes should be for the collective.

“We wanted to do our little bit for society and nature. If each one of us thinks like that and begins to do their smallest bit, it would have a larger cumulative impact in creating a healthier and greener India in the future,” he concludes.