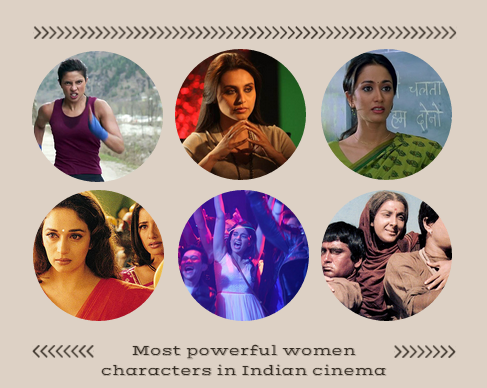 As PM Narendra Modi launches the #BetiBachaoBetiPadhao Yojna, we recollect some of the most powerful women characters from Indian cinema who showed what it was that educated and liberated women could achieve. As a medium with the strongest influence on the Indian psyche, we explore through these portrayals how cinema has played an important role in promoting the empowerment of the girl child through the years.

Cinema plays a key role in depicting amazing personalities who inspire us in more ways than one. In an art form that largely casts men in the lead roles and women as supporting cast, there have been some memorable films that deviated from the norm and depicted strong women characters which left a mark on the society and became an inspiration to many.

Prime Minister Narendra Modi launched Beti Bachao Beti Padhao Scheme on January 22, 2015 which aims at generating awareness and improving the efficiency of delivery of welfare services meant for girls. When it comes to women empowerment, Indian cinema is not far behind. Here are 11 most powerful and memorable characters that portrayed the strength of women perfectly (spoiler alert ahead) –

Rani Mukherjee’s portrayal of a fierce cop in Mardaani perfectly showcases the true strength of a woman. The character is based on a real life cop who solved several child trafficking cases. Shivani Shivaji Roy not only single-handedly beat up some of the baddest criminals but held her own against the evil doers. The perfect mix of strength and respect, Roy is an inspiration.

When most of the youth in villages seem to be migrating to urban cities for better jobs and opportunities, the simple character of Gita (played by Gayatri Joshi) from Swades sets an example of an empowered woman who can make her own decisions. This highly educated village girl gave up lucrative offers in the city and chose to stay in the village to teach kids and reform the village. Her unconditional love for the villagers and her selfless acts made her a strong character which many women would aspire to.

Rani Mukherjee’s character Michelle as the visually and hearing impaired protagonist in the movie Black is one of the most powerful portrayal of a physically handicapped person in Indian cinema. The relationship of Michelle with her aging teacher (Amitabh Bachchan) and how she helps him to rediscover life is very liberating, inspiring and shows the true strength of a woman.

The character of Rosie played by Waheeda Rahman in this 1965 classic showed women in a different light. At a time women were expected to be dutiful and follow their husbands even when unhappy, Rosie left her cheating and unsupportive husband and decided to choose her passion for dancing and someone who valued her as a person. Later, she again followed her heart and drifted apart from her lover when he did not turn out to be what she had expected. Rosie was one of the rare characters in Hindi cinema who stood for what she believed in and made her own choices in life.

Though all the girls in Chak De did justice to their character, there was one girl who stood out and gave a fresh and powerful answer to the male dominated society. We are talking about Preeti Sabrawal (Sagarika Ghatge) who portrayed the character of an independent, self-respecting and dignified hockey player who refused to give up her career for her celebrity boyfriend. She not only stood up for herself but was an inspiration to all the ladies who sacrifice their dreams at one point or another because of their partners’ different priorities.

A mother’s character has always been depicted as sacrificing, loving and all-forgiving – the one who would goes extra mile to do the best for her children. But Radha (Nargis) in Mother India played a challenging, different and strong character who killed her own son when he became an outlaw. She was a perfect example showcasing a woman’s strength, willpower and sense of righteousness. Radha left a mark on everyone who saw the powerful film and will be remembered for a long time.

This character needs no introduction. The powerful portrayal of boxer Mary Kom by Priyanka Chopra is one of the strongest female roles in Indian Cinema. How Mary Kom went against her family and chased her dream to become a boxer is very inspirational. In a country where sports is not taken seriously as a career, especially for girls who are supposed to get married and look after their family, Mary Kom sets an example for all of us.

8. MEERA GAITY in No One killed Jessica

Yet another powerful performance by Rani Mukherjee as Meera Gaity, a feisty journalist who stands for the truth and brings an influential culprit to justice when all odds were against her. She not only single-handedly reopened the case but also got the public involved and finally gave the much needed closure to the family of the innocent girl who was murdered. Gaity is the perfect example of a modern, empowered woman who can bring a larger change.

The character of Janki played by Madhuri Dixit sure portrays one of the most powerful identifies of a woman in Bollywood. If women can be loving and caring, they can also be fierce and stand up for what is right at the same time. Janki not only showcased freedom and a fearless attitude which does not care about others’ opinions, she also raised important questions on the sensitive issue of Indian mythology and religious beliefs.

The character of Bindu portrayed by Smita Patil gave a glimpse of a strong, independent woman who never feared to stand up for her and her community’s rights. She went against higher authorities to set up a local milk cooperative that could help villagers earn a better livelihood. She was not afraid of raising her voice against wrong and stood up to influential personalities with confidence.

If there is one character which touched everyone’s heart, it was that of Rani played by Kangna Ranaut in Queen. Rani’s transformation from a once shy and timid girl to a confident and liberated lady was amazing. The natural, innocent and effortless acting made Rani look like a real life character and had the ability to inspire many girls to come out of the shadows and feel confident about themselves.

We are proud that the Indian film industry has been giving due respect and credit to strong women characters through its history and we hope it will only increase in the future with the new fillip provided by the government.