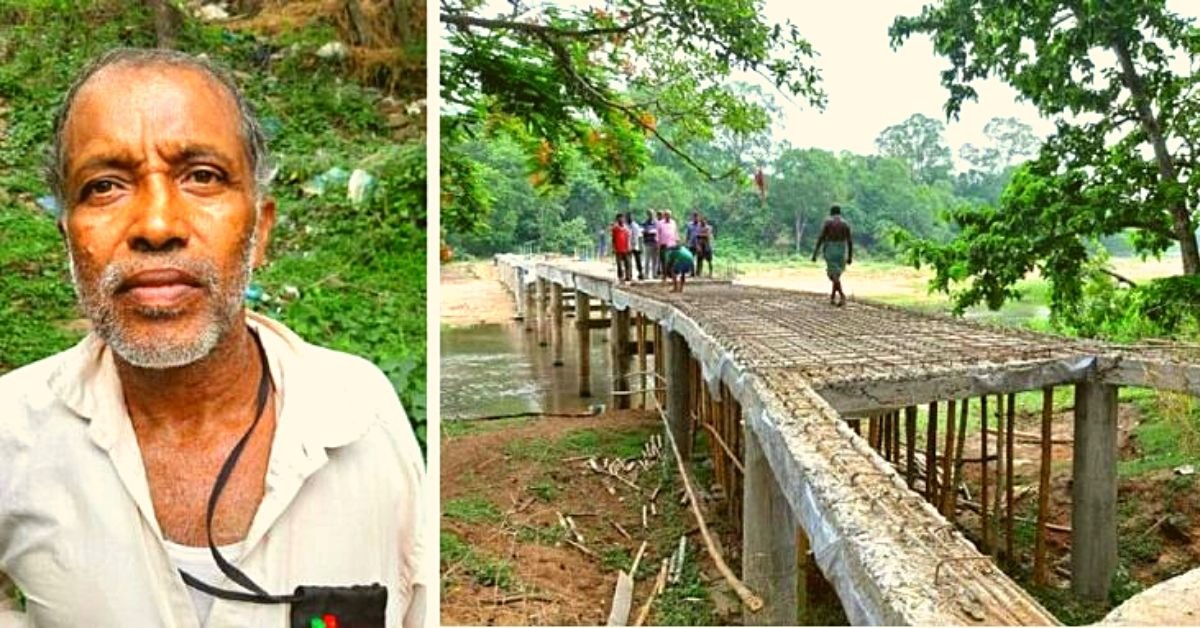 "We requested officials and local people's representatives for completion of the bridge, but no one paid any heed towards our demand. With no other option in sight, I decided to shoulder the responsibility," said sexagnerian Gangadhar Rout. #Respect #Inspiration

What do you do when the government stalls on your access to basic public goods and services?

Sexagenarian Gangadhar Rout, a retired livestock inspector with the Odisha government, has waited all his life for the local administration to build a bridge across the Salandi river in Keonjhar district.

His village of Kanpur, which gets cut off during the monsoon, loses access to its farmlands, which are on the other side of the river. Even when it’s not raining heavily, the lack of a bridge compels the villagers to row across the water or take long detours on foot to reach their farmlands.

Tired of waiting, Rout dipped into his savings and pension to start building the 270 foot-long bridge across the river that links Kanpur village to Daneipur in October 2016.

The circumstances leading up to this decision highlight the apathy many of our fellow countrymen endure at the hands of the state. For many years, nearly 1,200 residents of the village have demanded the construction of a bridge.

More than a decade ago, a local truck owners’ association, a local legislator and the Hatadihi block administration, donated funds to the tune of Rs 6 lakh to construct the bridge. However, due to the paucity of funds, the construction of the bridge was incomplete.

“We requested officials and local people’s representatives for [the] completion of the bridge, but no one paid any heed towards our demand. Local truck owners’ association and other private organisations also did not help us financially. With no other option in sight, I decided to shoulder the responsibility,” said Rout, speaking to The New Indian Express.

Dipping into his retirement benefits of Rs 12 lakh, he took his nephew and surveyed various bridges in the area to understand what it takes to build one.

Following this, they bought the necessary cement, bricks and iron roads, and in October 2016, with some external assistance, began constructing the bridge.

Initially, he had thought about using the money to buy a car, but the decrepit condition of the incomplete bridge cause him to decide against it, instead, spending the money on fixing and completing it.

However, the process of building the bridge has not been without its challenges. Speaking to the Hindustan Times, he says that the initially, the bridge was to be constructed within Rs 6 lakh. However, erecting pillars that hold the bridge had cost him around Rs 10 lakh.

“I almost ran out of money. Luckily, I did not have any small children in my family to look after, so I could spend without thinking much. My two sons are well-settled in life, and my daughter is married. I have very few needs,” he told the Hindustan Times.

Also, the local district administration has finally taken cognisance of his efforts.

“A team has already visited the site. The administration will complete the bridge with its resources,” said Keonjhar District Collector Ashish Thakre, in a conversation with IANS.

Thakre even admits that had it not been for Rout’s efforts, the bridge would not have been completed. Meanwhile, the administration will also help build approach roads to the bridge for vehicles to pass.

Rout is awaiting his pension arrears from the Odisha government to facilitate his efforts towards building the bridge. Reports indicate that he will spend an additional Rs 2 lakh to complete construction by next month.

Locals at Kanpur village in Odisha have praised his remarkable work in the face of government apathy. “Nowadays, people run the extra mile to make money. Gangadhar is a man of the rare gene who defies the stereotypes. We had approached many, including politicians, but no one took [an] interest. He is a messiah for us. We are proud of him,” said a local to The New Indian Express.