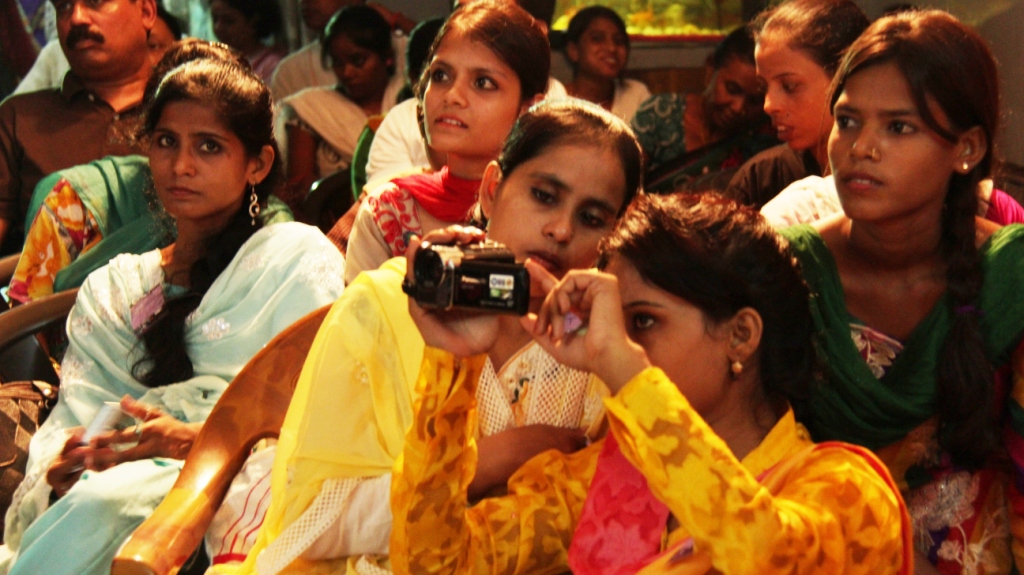 Muslim women in Lucknow are introduced to information technology, filmmaking and photography as part of an innovative feminist leadership programme
Promotion

Several Muslim women in Lucknow are not only becoming independent but are also now helping others like them to pursue their passion and break the age old stereotypes. Know more about these brave women who have finally come out of the shadows.

Nasreen, 32, does not have a second name. A few years ago she had no income either. All that this purdah-clad mother-of-four had was a little experience in stitching.

Like countless other Muslim women from conservative homes in Lucknow, Uttar Pradesh, Nasreen, too, was forbidden to step out of her home. Despite living in crushing poverty she was not allowed to look for work to chip in and make things better. For the longest time she continued to forge on but when it became a matter of life and death, Nasreen decided to take some hard decisions.

“My husband was unable to find work and the family was on the verge on starvation. What more could happen? We had nothing. I decided to defy everyone in my family and grabbed on to the first job that was offered to me,” she shares.

That opportunity was to make hand-crafted bags for Sanatkada, a local non-profit conceived as a centre for ethnic crafts and weaves.

Since 2006, the organisation, founded by Madhavi Kuckreja, a development livelihood professional and human rights activist, has been working to revive, restore and showcase traditional crafts and textiles from around the country in Lucknow.

While Nasreen was employed to sew shopping bags used at Sanatkada’s retail outlet in the city, today she helps run it.

At first, Nasreen was satisfied with the work she was doing because the money she earned was good enough to feed her family. However, a chance enrolment in Sanatkada’s feminist leadership training programme transformed her entire outlook and opened many doors for her.

It was in 2011 that Nasreen attended the training workshop with 20 other women in an effort to empower herself with life enhancing skills. She learnt how to use the computer, make films and, later, even handle accounts.

“Every year since 2010, we have been choosing around two dozen young women between 21 and 25 years of age for a course in information technology along with stints in film-making and photography. That most women in this programme are Muslim is simply because, by and large, they lack the opportunities due to the secluded lives they lead and are more deprived and needy than their counterparts from other communities,” states Hameeda Khatoon, the Coordinator of Sanatkada’s leadership and self-esteem workshop for girls.

Sanatkada has been conducting trainings and workshops on gender and identity in partnership with Nirantar, a Delhi-based non government organisation that focuses on gender issues linked to caste, sexuality and religion. The two organisations collaborate at the community level for research and advocacy and their work is strongly rooted in the lives of rural women.

Together with Nirantar’s Sahba Syed, Hameeda has been bringing a positive change to many lives through their interactive and lively training sessions where the use of information and communication technologies, including computer and internet, videography and photography are the highlights.

The idea is that eventually women like Nasreen get enough confidence to get on in life – sans the purdah, or help and hindrance from their men.

Hameeda, 28, is a glowing example of an illiterate girl from a poor Muslim family who lives life on her own terms now.

Before she had joined Sanatkada in 2008, she used to earn a living by picking flowers in the small town of Faizabad, some 300 kilometres away from the state capital, where her poverty stricken family, consisting of her widowed mother and many siblings, survived on hope and a prayer.

“Even as a youngster I was convinced that the key to all my problems would be a good education,” says Hameeda, whose siblings, including her brothers, have not attended more than three to four years of school.

Hameeda is a university graduate and since 2010 has helped nearly 51 Muslim girls to benefit from Sanatkada’s leadership workshops. Out of these, about 28 girls have found work at call centres, at local NGOs and as teachers.

Some 15 girls are employed by Sanatkada and once they are economically independent many even give up wearing the burqa (veil).

“Those who are married and those who still wear the burqa do so mostly out of choice and not out of fear of men in the family or neighbours,” she points out with pride.

Like Hameeda, Nasreen, the sole bread earner of her nuclear family, has managed to break free from her shackles and become a calmer person. Moreover, she is studying for a graduate degree while her husband still remains unemployed.

“My husband spends the entire day relaxing at home but I don’t mind that any more as I can educate and feed my children on my own,” says Nasreen, who, till only three years back, was very unhappy and depressed. These days, she effortlessly works at the computer and loves to indulge in photography when time permits.

Another product of Sanatkada’s leadership programme is Neha Khan, 23, the eldest child of a tailor with six daughters.

Studying for a bachelor’s degree in commerce, Neha’s biggest fear at one time was that her father would not be able to pay for her education.

It was only after she underwent the training that she has found enough confidence to travel in the city on her own and talk frankly to people when necessary.

“A year ago, I was extremely shy and did not know whether I would be able to fulfill my ambition of studying further or speak about the problems I encounter as a woman when I step out of the protection of my home. At least right now my parents have no objection to my studying as long as I can pay for the tuition fee myself,” she says.

Young Muslim women from lower middle class families in Lucknow have got a chance to break stereotypes and show the strengths and talents they possess. If there is a Hameeda, who has moved on from her dismal past and become an independent career woman reaching out to others in distress, then there’s also a Nasreen, who has defied the odds to make a life for herself and her children without any support or encouragement from her family.

They are truly unique female role models, who are setting an example of reliance and excellence for everyone in their community.

Written by Mehru Jaffer for Women’s Feature Service (WFS) and republished here in arrangement with WFS.