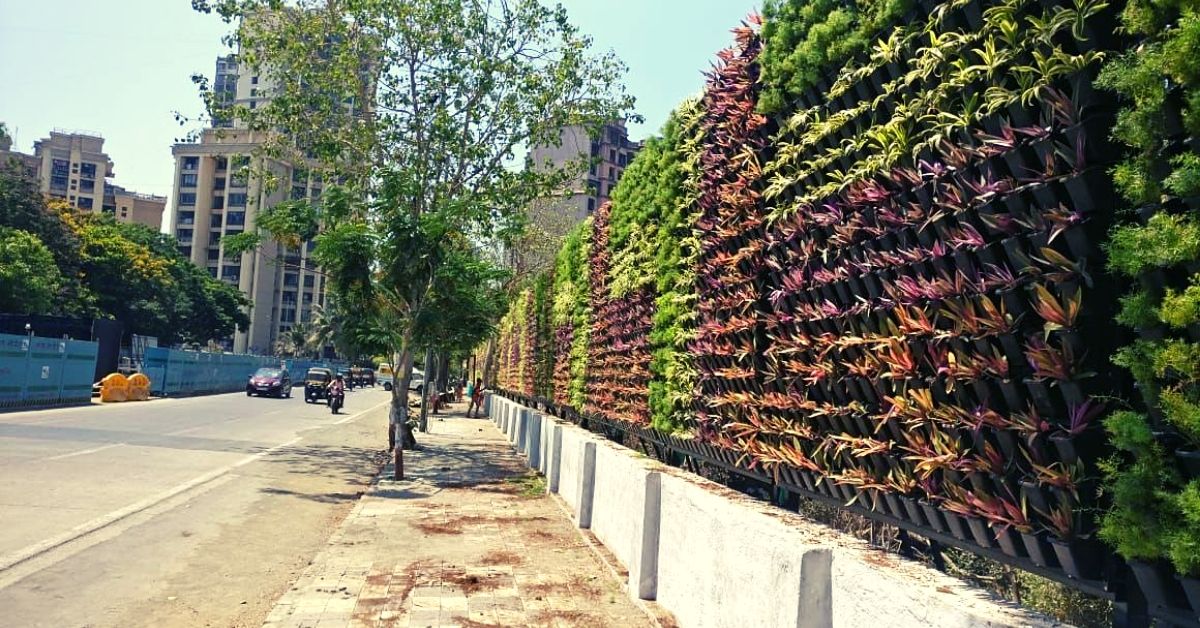 One of the simplest and most cost-effective measures to protect mangroves, these natural barriers also help absorb carbon emissions from vehicles, thereby reducing air pollution in the zone!

In 2017, the World Mangrove Action Day began on a positive and hopeful note. The National Institute of Oceanography (NIO) released a study revealing that the mangrove cover in Mumbai had increased by 20 per cent.

The same study also revealed that the rise was restricted to Thane, Sewri-Mahul and Mahim creeks. Mangroves in the Malad creek, which covers locations such as Versova, Oshiwara and other areas of Andheri, have declined by less than one sq km, mostly due to destruction.

To protect and preserve the mangroves in the suburbs of Mumbai, the state forest department recently introduced bio-fences or barriers made from plants.

These bio-fences, on which the plants and shrubs are grown, are installed in Versova.

The step has been taken to eliminate open dumping and burning of garbage that eventually affects the health of trees. As per Hindustan Times, to protect Mumbai’s 6,600 hectares of mangrove cover, the Maharashtra state government has dedicated a cell.

Burning garbage leads to air pollution and the destruction of mangroves. We hope to beautify the area through bio-fences that will discourage people from littering.

The planned 180 sqm stretch of mangroves will consist of different coloured plants like Rhoeo spathacea, Tradescantia pallida and Asparagus sprengeri.

Presently, the state cell has funded the construction of the bio-fence for a half 90-metre stretch.

Work on the remaining area will begin soon, expected to be funded by state legislator Bharati Lavekar. The brain behind the natural fences, she has been raising the issue of mangrove destruction in the maximum city.

Lavekar told the Hindustan Times, “We had placed the proposal before forest minister Sudhir Mungantiwar who approved it. Using development funds allotted for Versova constituency and support from the mangrove cell, the project was implemented. Not only does it help protect mangroves, but the natural barrier helps absorb carbon emissions from vehicles, thereby reducing air pollution in this zone.”

The state department cell will undertake awareness programmes from the upcoming World Environment Day (June 5). Deshmukh adds, “Though the instances of garbage dumping have reduced, they have not been eliminated. Beautification is only one step as awareness is the key for any mission. On June 5, we will launch a campaign to clean the mangroves in Versova.”

Four Reasons Why Preserving Mangroves Is The Need of The Hour

Mangrove trees act a natural barrier against storm, surges and floods. The roots trap the river and land sediment that slows down erosion. They also protect human settlements that are at risk from sea-level rises. In 2017, the UN Ocean Conference estimated that nearly 2.4 billion people live within 100 km of the coast.

According to U.S. Forest Service and university scientists, mangrove forests store more carbon than almost any other forest on Earth. They extract carbon dioxide and store it within plants.

Mangrove trees are a source of wood for construction and fuel. The plant extracts possess medicinal qualities, while the leaves can be used as fodder for animals. Meanwhile, the forest waters ensure sufficient supply of fish and crabs to sell commercially.

By filtering the coastal water, the mangroves form a nutrient-rich breeding ground for numerous marine and non-marine species. These include fish, crab and shrimp species, molluscs, mammals like sea turtles and migratory birds.

Also Read: This Man Won a 30-Year-Long Fight to Save 15K Hectares of Maharashtra’s Mangroves

Deshmukh says that the cell is also working towards building a similar fence in another 700m stretch of the 15-hectare cover in the same area. The department will use the government’s corporate social responsibility (CSR) funds for the same.