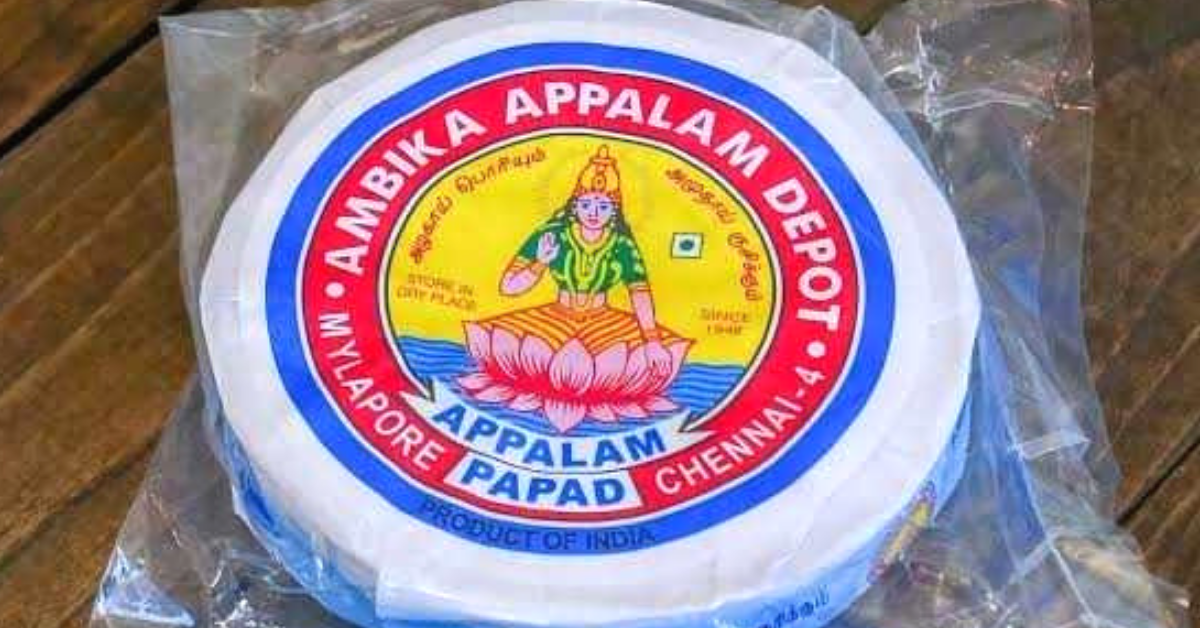 This iconic brand was started by a man named Aiyappan in 1915 in an 850 sq ft house in the by-lanes of Triplicane in Chennai.

The power of a brand can never be underestimated. A brand is a promise to the customer, and as long as the product lives up to the promise, the brand will always thrive.

A case in point is a small appalam (papad) brand, started in the early 1900s, which continues to thrive in today’s age of private labels and ready-to-eat foods.

It must have been some appalam that made the Eighth President of India, R Venkataraman write in the Rashtrapati Bhavan menu that “South Indian food should be served with Ambika Appalam.”

This iconic brand was started by a man named Aiyappan in 1915 in an 850 sq ft house in the by-lanes of Triplicane in Chennai. Aiyappan, who had migrated from Trichur in Kerala to Madras in search of employment opportunities, decided that selling papadams would yield good results.

He would make these hand-pressed papads, bundle them together by a jute rope, and go from door-to-door to sell them.

As the papads became popular, he got married and started a family of his own, all of whom were involved in the business in one way or the other.

Aiyappan’s son dropped out of school and joined the business formally in the mid-1900s. He suggested making ‘appalam’, which had a shelf-life of up to a year, while that of a papadam was merely a week.

It is interesting to note that until 1956 (for over 40 years since the product was launched), the appalams had no brand name.

Finally, it was Velayudhan who came up with a name—Ambika Appalam Depot. A local artist sketched the logo with the tag line, ‘Azhagaai porium’, which means ‘fries beautifully’. The artwork adorns their wrappers even today.

Moreover, the young man ensured that the products were sold beyond Triplicane. He visited places as far as Tambaram as well. With a desire to make it big, in 1963, he opened their first flagship shop at Mathala Narayanan Street in Mylapore, just enough to seat one person.

That was just the beginning

By 1965, the company had diversified by adding many more products to their list—various kinds of podis (rasam, paruppu, sambar, idly), along with different kinds of appalams and papadams with ingredients like arasi (rice), jeera (cumin seeds), jackfruit and tapioca.

It was in 1975 that K V Vijayraghavan, the grandson of Aiyappan, all of 20, joined the business. In an interview with The Hindu, he had said, “Sitting in the shop was entertainment for me because quite a few actors would visit.”

What’s worked for the company is their consistency—they have not altered the recipes since they began operations.

Vijayraghavan says that their customers are so discerning that even a small slip doesn’t escape them.

You May Also Like: Why This Engineer-Turned-Lawyer From Chennai Has Filed over 25 PILs in 3 Years!

With his son, Vyas, joining the business, the fourth generation of the family is ready to take it forward in a more modern way. The 55 varieties of Ambika products are presently available on Amazon with the brand aiming to have their own retail portal soon.

To know more about them, write to info@ambikaappalamdepot.com.