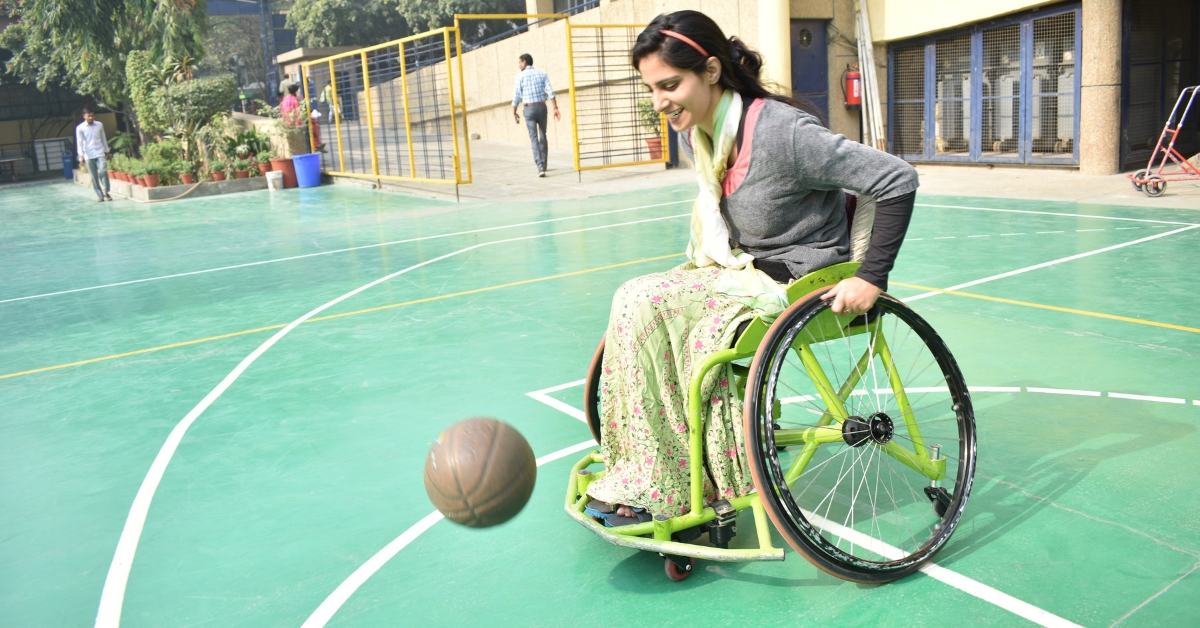 From a life-changing accident and depression to self-doubt and suicidal thoughts, Inshah’s life has been nothing less than a rollercoaster ride. But every time one door shut, the courageous girl looked for another one.

A typical day for Inshah Bashir begins at six. Along with carrying her blue bag, she makes sure to carry a separate bag to accommodate her most favourite thing in the world—a basketball.

“It is possible that I might come across a basketball court or someone might just invite me to play,” Inshah tells The Better India, giggling.

She goes to a school where she teaches children in a primary class. As soon as the final bell rings, she goes to a nearby court to practice for her upcoming Sports Visitor Programme in the United States.

She sounds a bit nervous about travelling abroad for the first time but is equally excited about it.

She shares, “It is a huge opportunity for me to share my story but travelling by aeroplane gives me jitters.”

After the practice, she returns to the hostel and counsels young girls who wish to overcome their struggles and play like her. Her day ends with a reminder of all the things she needs to be grateful for and reinforcement that she must make tomorrow better than today.

She surely inspires me to go out of my way and do things beyond my sedentary lifestyle.

But there was a time when she could not even do basic chores by herself. It was only through an undying attitude and willpower as solid as steel that her life changed.

She has played at the national level and is all set to take her story to an international platform.

At 15, she was left wheelchair-bound after she fell from the third floor of her under-construction house in Budgam district, Jammu and Kashmir.

Serious injuries to her spinal cord, and the lack of facilities and medical guidance made her injuries permanent. Even though doctors said that she could recover in six months, she now had to depend on the wheelchair.

Telling a girl, who is merely 15, that she cannot walk for life, is very difficult. When my family informed me about it, I was devastated. I had so many professional and personal aspirations that came crumbling down within seconds, she says.

Despite the physical hardships, she continued to prepare for the MBBS entrance test. She qualified for it but travelling back and forth to the exam centre on a rocky plateau was a commitment she was not ready for.

Still, her family encouraged her to finish her graduation in Humanities. She completed her BA and B.Ed.

Despite the qualifications, finding a decent job seemed an impossible task.

Meanwhile, constant taunts from her relatives further took a toll on her emotional health, “I was not only dependent on my family physically but also financially. One of my relatives even told me that I should have died in the accident. Every door was shut for me, and I slipped into depression.”

Though she was going through a thousand deaths daily, something in her kept going. Her father was her constant pillar, and when he was diagnosed with Parkinson’s Disease, it was the final nail in the coffin.

My dad’s deteriorating health pushed me to take charge of my life. And so, I began researching my condition and what I could do about it. I came across the Shafqat Rehabilitation Center in Srinagar that gave six months of physiotherapy.

Although Inshah’s parents were apprehensive about her living on her own, they enrolled her in the programme under the condition that her siblings would accompany her.

Against everyone’s expectations, Inshah asked her sister to return home on the second day. She recalls, “I was not ready to be on my own, but I needed multiple falls to rise. The initial days were physically exhausting, but they helped me get out of my trauma.”

During the physiotherapy classes, she met the men’s wheelchair-bound basketball team and saw how the players were in a more terrible shape than her.

Being a sports enthusiast since childhood, she requested them to let her join the team.

For the next six months, she underwent rigorous training and overcame all challenges.

I felt at peace the first time I put the basketball in the net, and all my negative thoughts disappeared. Every time I dribble the ball, I feel alive, she says.

Since there was no women’s team in J&K, Inshah travelled to Hyderabad and qualified for the National Championship. It is one of her most cherished memories, she shares. “Every player had to shoot at least three of the ten chances given. I managed to score seven, and that was the turning point of my life.”

Post the match, she shifted to Delhi. This time too, her parents were not ready to let her live on her own.

There was a lot of emotional drama in the house, but Inshah’s determination took her to the national capital.

Recently, she completed a year in Delhi and goes to Amar Jyoti School every day.

During the past year, she has been travelling back and forth to Kashmir. “Whenever there is a training camp for girls, the rehab centre calls me to train them. I also counsel the girls who are going through emotional turbulence.”

Juggling between her teaching schedules and training camps, Inshah also travels across the country to play matches. When she was playing a series in Mumbai in October 2018, visiting members from the United States spotted her talent and invited her for an exchange programme. It will be a three-day awareness project in June this year.

After she completes the project, Inshah wishes to create an all-women wheelchair-bound basketball team in her state. She elaborates, “Many differently-abled girls from Jammu and Kashmir want to create their own identity, and I want to help them. I want to spread awareness about the opportunities for the disabled.”

Inshah’s life has been nothing less than a rollercoaster ride comprising self-doubt, suicidal thoughts, depression and physical challenges.

But every time one door shut, she looked for another one. Her courage and willpower are now taking her places!

Change does not take place overnight. It requires a lot of dedication, hard work and perseverance. I have failed many times and cried myself to sleep. But this same life has been a very effective teacher as well, she concludes, as she heads out for her practice session.

Also Read: This 16 YO Girl’s Brilliant Invention For Her Disabled Brother Will Make Your Day!

If this story inspired you, write to Inshah on inshahbashir@gmail.com.