The Better India is extremely pleased that our video series, ‘Reach For Better’ has picked up not one, but two trophies at this year’s vIDEA Awards!

The series received prizes for ‘Best Branded Video Content’ and ‘Best Storytelling’, which we are extremely stoked about because storytelling is what we’re all about. ‘Video’ used to be a fancy content format, but it has since morphed into a platform of its own. It’s visual and universally engaging nature makes it a very powerful tool for storytelling in today’s highly digital world.

Now all brands want to leverage video, and the mushrooming of talented boutique video agencies has resulted in a highly competitive landscape for video.

It is for this reason that it is doubly exciting for us that our content collected two spots at this year’s vIDEA Awards.

The ‘Reach For Better’ series took us on a long and trying journey, and resulted in six inspiring stories of resilience, grit, and ultimately success. The protagonists that we were able to cover for this series range from a 15-year-old inventor to a transgender radio jockey. Each of these stories speak of struggles, and a value that helped them overcome their hurdles.

For Team TBI it was especially difficult- but gratifying- because of the roller-coaster of emotions. Yes, these stories filled us with hope, but there are also some heart-breaking parts in there too.

“Working for the Franklin Templeton ‘Reach For Better’ project was a very memorable one. The film making process was very fulfilling because the protagonists were so very inspirational. They kept us going in the scorching Indian summers because we were hell-bent on doing justice to their stories.” says Krishna MV, a producer on the series

Thousif Raza, the lead producer for the series, speaking about one of the stars said, “The protagonists really are heroes. One of them said something that really touched me – he said that he is willing to let farmers learn the technology he has developed for free provided each one of them helps ten other farmers learn it. That’s such dedication to the service of others! And each one of the protagonists is a stellar life example in their own way.”

These stories go to show that with a little bit of ingenuity and a whole lot of courage, anything can be accomplished. Just look at what the six protagonists of this series have done and the life values they represent, and click here to know more about the campaign: 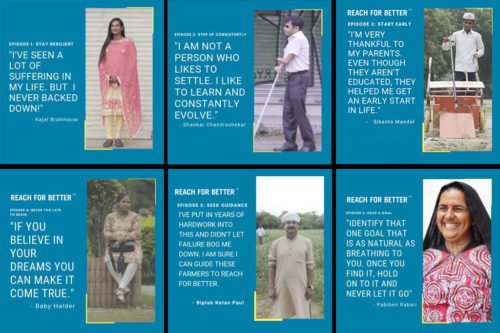 Stay Resilient: This video is about a transgender who fought the dismissal and harshness of society to achieve her dream of becoming an RJ and a respected citizen in her community. Watch the video!

Step Up: Despite being born visually impaired and with limited mobility in his arms, 29-year-old Shankar Chandrashekar is a digital guru and helping other visually-impaired people become tech-enabled. Watch the video!

Start Early: A 15-year-old son of daily wage labourers builds a unique garbage-collection cart that is winning awards, proving that innovation can come from anywhere if given the right support and encouragement. Watch the video!

Never too late to begin: A child bride at 12 and a mother at 13, Baby Halder escaped a life of abuse, took up a job as domestic help, and went on to become a bestselling author. Her book has been translated in 21 local and 13 foreign languages. Watch the video!

Seek Guidance: Biplab Ketan Paul, water sector expert and social innovator, has created a unique rainwater harvesting technique that is transforming 40,000 barren acres and can hold up to 40 million litres that will last farmers 7 months! Watch the video!

Have A Goal: Pabiben used to fetch water for Re.1 a day. A female artisan in a village in Kutch, she defied social diktats to invent her own art form, and now her art trade employs women in the village and has an annual turnover of Rs. 20 lakh. Watch the video!

The video series was a success for the brand- Franklin Templeton India- as well. We amalgamated their brand philosophy with an engaging format of video storytelling woven around important life lessons which can also be adopted when it comes to one’s investments (resulting in the themes stated above).

The campaign generated more than 27 million video views, achieved over 124 million impressions, and engaged with half a million people. It has since become one of the most successful campaigns in the brand’s history.

vIDEA, The Video Media Summit & Awards 2019 has been conceived by Inkspell to recognize and acknowledge the champions of the video content and media industry, and push us all to create even better content. Inkspell Media is an avant-garde digital solutions enterprise.