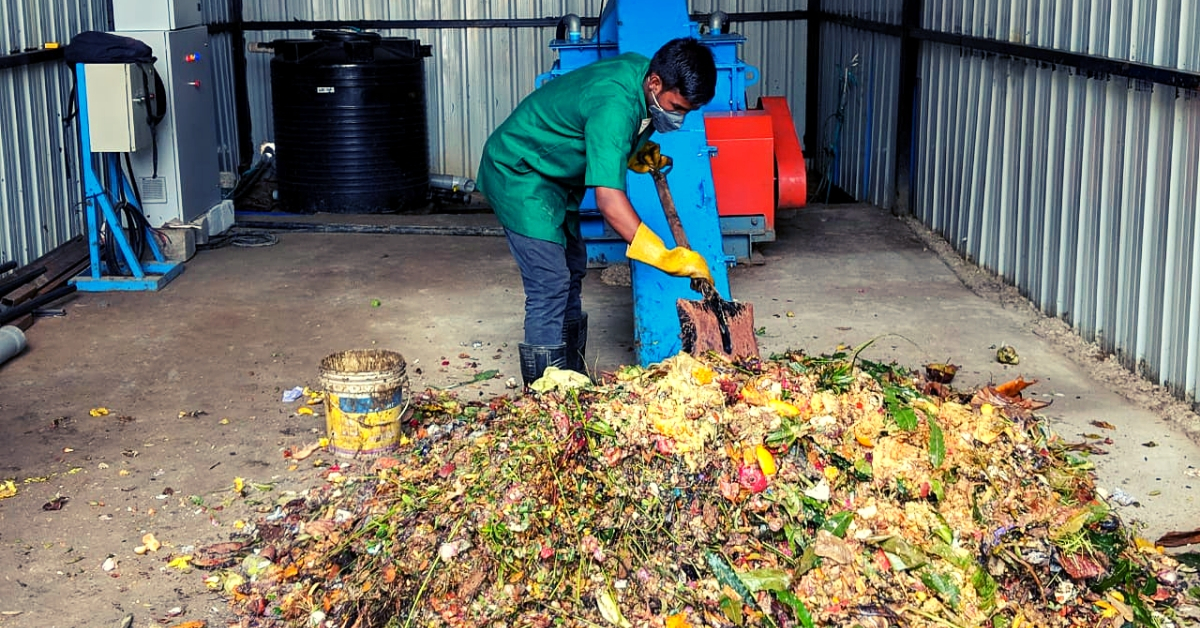 “Often, most of the organic waste that ends up in landfills, produces methane which is a big contributor to greenhouse gases. The residents wanted to change that.”

In 2017, Som Narayan, co-founder of Carbon Masters, recalls how a few members of the Koramangala Residents Welfare Association visited the biogas facility that his team set up at the Iskcon Temple in Rajaji Nagar.

BTM constituency generates close to 120 tonnes waste per day, of which 55 per cent was organic. The idea, therefore, was to avoid organic waste from exhausting landfills and find the right solution that incorporated principles of circular economy.

“Often, most of the organic waste that ends up in landfills, produces methane which is a big contributor to greenhouse gases. The residents wanted to change that.”

This was around the same time when the High Court passed an order to ensure segregation and decentralised treatment of waste within all wards.

Som’s startup has been working in the space of renewable energy and reducing carbon emissions for close to six years. Apart from the plant at Iskcon that converts half a tonne of organic waste into gas to power the kitchen, they also run a ten-tonne/day biogas plant in Doddaballapur and 20 ten-tonne/day projects at Indore.

Apart from this, they also have a ten-tonne plant that converts garden waste into organic manure in Malur.

Now, they are venturing into Andhra Pradesh.

The Koramangala residents were supported by local politicians, and discussed the course of action with the Bruhat Bengaluru Mahanagara Palike (BBMP).

It was only a matter of time until the civic body floated tenders to get an agency on board. The idea was to set up the biogas plant under a Public Private Partnership (PPP) model. Som’s startup, Carbon Masters, won that tender.

As per this model, the startup would work with the residents association and BBMP for the next 15 years, which is also coincidentally, the shelf life of the biogas plant.

When I ask him about the challenges that plague the already defunct biogas plants in Bengaluru, he answers, “Often, technology providers work hard to sell the technology. But once that purchase order is filled, they walk away. Our model, on the other hand, is one where we build the plant, assist in operations of the plant, even commercialise the gas and fertiliser produced from the plant to sustain it.”

The startup sells the produced CNG gas and fertiliser under their brand Carbonlites.

“We then sell this bottled Bio-CNG to restaurants or run our vehicles on it. We are also working on setting up a transportation bunk where we can sell the gas.”

With a current capacity to process four tonnes of waste, the plant was built in a way that not a single tree was felled during its installation. The digestors were made from repurposed shipping containers and fitted with stirrers.

The startup set up the plant at the existing waste aggregation center by turning it into an enclosed shed for clean and hygienic processing of the waste.

The segregated waste from the societies is sent through a screw conveyor to be crushed into slurry.

Four tonnes of processed waste generate 100 kg of gas. The Carbon Masters team have been selling this gas to a restaurant close to the biogas plant which uses it to cook 3,000 meals a day.

How is this Bio-CNG produced different from regular LPG?

The purification system of the plant removes the CO2, H2S, moisture and other unwanted impurities to produce a clean cooking gas, which has a higher calorific value compared to LPG.

“It has a better heat output and provides better cooking performance for chefs. They love the gas quality. Another benefit is that the system of using this gas is a lot more transparent than using LPG cylinders where there is no way of tracking how much gas is being utilised. Often, eight to ten per cent gets wasted. We, on the other hand, have set up a gas flow meter and allowed the user to control the pressure manually too. So, they know that they are using an alternate clean and green fuel and paying exactly what they use. We also take care of all their requirements from doing the pipelines, and burner adjustments, thus saving them costs.”

He adds how convincing the eatery to get on board with the idea of using Bio-CNG wasn’t very difficult.

While they first started by connecting biogas to one burner on a trial basis, now, all the burners in the kitchen are connected to the piped biogas from the unit.

Using Bio-CNG also saves the restaurant 15 per cent costs when compared to LPG.

The three institutions, including the RWA, Carbon Masters, and BBMP, are in the process of upscaling the capacity of this unit from four tonnes to ten tonnes. The success of this project has also led to the commissioning of four more ten-tonne units to be set up across four more wards in Bengaluru.

So what is the price range to set up a biogas plant?

“Say if there are 500 households that generate half a ton of waste everyday, where each household generates 700 gm-1 kg waste, the cost of setting up the biogas plant would be Rs 25 lakh. The return on this investment is less than three years.”

You May Also Like: This 21-YO Vadodara Braveheart Saved a Drowning Man & 3800 Distressed Animals!

“From being referred to as gobar gas and later, a waste management solution, biogas has now become a mainstream sustainable practice which allows the ‘renewable’ extraction of gas from waste. In a country where 82 per cent fuel is being imported, this could be one step towards becoming energy-independent, creating local jobs and also reducing carbon emissions,” he signs off.

If this story inspired you, get in touch with Som on info@carbonmasters.co.in.