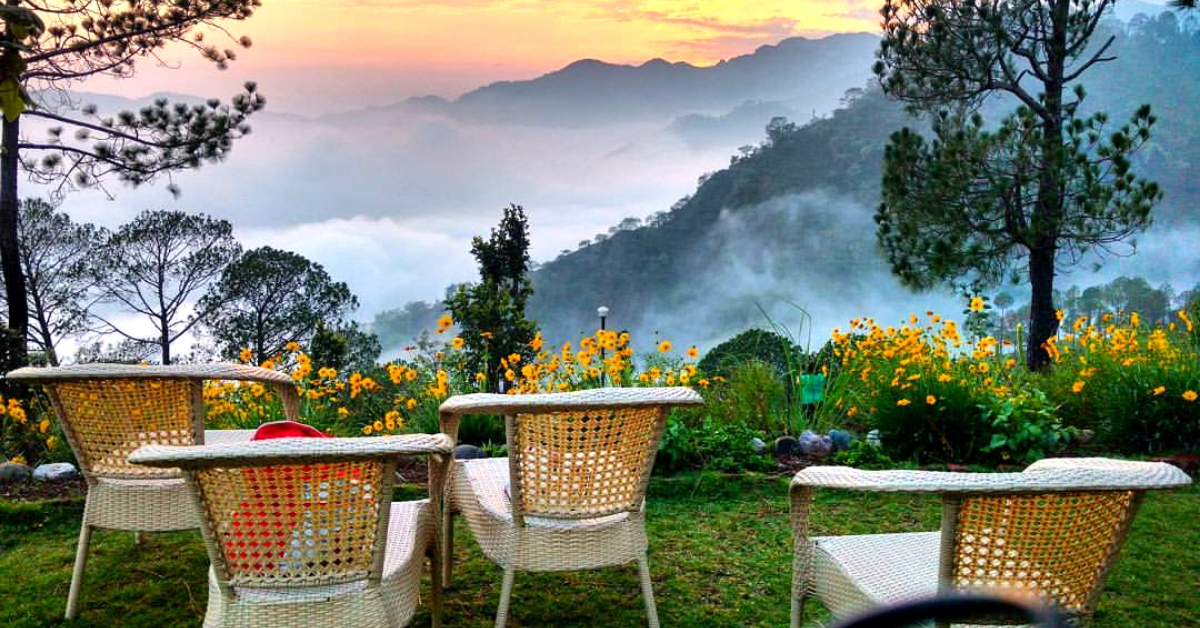 In addition to that, Nitya Budharaja and her family have adopted a government school in the region, and provide it with all the supplies it needs.

How often do you come across a person who has renounced the ease and comforts of an urban upbringing to embrace a life in the mountains?

Travelling to a picturesque locale to escape the usual routine and monotony of city is one thing, but making it your home and working with local communities is an altogether different commitment.

Five years ago, Nitya Budhraja decided to bid goodbye to her life in New Delhi, to do just that.

She travelled across towns and villages in Uttarakhand, before settling down in Sattal.

Like its name, Sattal is a town comprising seven interconnected lakes and is the little-known cousin of hill stations like Nainital and Bhimtal.

Today, Nitya lives amidst its mountains and valleys and manages a café as well as rental vacation home service there.

Nitya’s tryst with Sattal or the mountain life didn’t begin one fine day. It goes back to her childhood when her father would travel to the mountains all the time, and eventually, made Sattal his home.

“He was smitten with the mountains, and always wanted to acquire a patch of land and team up with like-minded people to create a private living space. However, when the deal was all set to happen, the villagers forced him to purchase an entire village that comprised two mountains and a valley. People had abandoned their homes there but wanted to move to the next village for better livelihood opportunities,” says Nitya, in a conversation with The Better India.

In the meantime, Nitya grew up in Delhi and eventually began working in the event management sector.

“It was fine in the beginning—throughout my growing years, I’d always wanted to fit in the scene, so Delhi’s lure was inevitable. But the amount of wastage that followed every event, eventually got to me and led to a disillusionment with the work that I was doing. It all seemed so pointless—an event lasting less than four hours generated waste that would last forever. I wanted to leave that life to seek something better,” she recalls.

Nitya joined hands with a Delhi-based startup that took people on treks all over the Himalayan region.

It is during this time that her interest in photography started, and she started posting photographs of the brilliant views and panoramas on her Instagram handle.

Sadly, the company had to shut down after a while, as it couldn’t sustain itself.

However, her time as a trek organiser and leader was all the push she needed to realise how she wanted to leave behind the city life and move to the mountains.

“Fortunately, I got a job in Liti, where I had to manage a seasonal property. This was located in an area that had a severe water shortage, lacked electricity, phone connectivity or even proper roads. But I did my job for six months. That’s when I realised that if I could do this, I could perhaps manage anything,” she laughs.

From here Nitya moved on to a village near Kasar Devi, where she worked with the Nanda Devi Handloom Cooperative that had employed about 200 rural women.

Life was peaceful, but that soon changed.

“My father passed away suddenly, and I had to quit overnight and come to the little township in Sattal that he had developed. There was land and few cottages to my disposal, but I had no inkling about what to do. My mother didn’t want to go back to Delhi anymore, so I settled down here, and it took us over a year to adjust to this life,” shares Nitya.

“There had to be some sustenance for us, in the form of a steady income, but we wanted to do it sustainably. We were also driven by the idea of what my father had started. In fact, during his stay here, he had constructed a few more cottages and then got all of them equipped with solar panels and a mechanism for rainwater harvesting. It didn’t make sense for us to begin any new construction; we decided to work on what we had. We spent a month and a half renovating and refurbishing the place, and turned it around,” she says.

Two years ago, few of Nitya’s friends were travelling to Bhimtal and wanted a place to stay. They convinced her to host them there, and that is when these cottages were opened to the public.

“They were more than happy when they were leaving, and their response greatly motivated us. That’s how Naveen’s Glen came to being. But we didn’t want to turn it into a commercial asset and put it out on the tourism radar. I didn’t want Sattal to turn into another Nainital or Bhimtal. Its beauty and charm lies in its pristine landscape, and we wanted to maintain that while responsibly catering to travellers,” clarifies Nitya.

However, water shortage was one more challenge to overcome.

To establish a better groundwater table as well as bring more broad-leaved green cover in the region, Nitya and her family spent the next two years planting around 7,000 trees in the area.

“We wanted to focus on native flora, mainly oak trees, to counter the pine trees, which are heavily water-intensive. Alongside, we started growing herbs and vegetables like potatoes, green peas, lettuce and even garlic. Some of the items served in the café are grown here, and we are working on making this place self-sustaining,” Nitya adds.

While Nitya set out to start the rental system and café on her own, her mother was involved right from the beginning. Eventually, her brother also joined in, and today, they operate as individual units.

“We realised that we nursed the same vision, and at no point did we feel like monetising or commercialising this venture. Together, our capabilities tripled,” she says.

In addition to her folks, Nitya has a team of approximately 17 people from the village working closely with her, while 50 are employed within the estate.

Because every one of these cottages requires maintenance, it has generated employment for the villagers—today, close to 50 work closely with Nitya and her family.

In addition to that, the family has adopted the government school in the region and provide it with all the supplies it needs.

In the future, Nitya intends to generate employment for the local community through pine needles, which are found in abundance in this area. She also wants to increase the forest cover in the region by bringing in more endemic species and ensure they are nurtured and protected until they can sustain themselves.

Nitya has never been more content and has finally found the peace she was seeking all her life.

“The past two years have been amazing and moving here, was perhaps the best decision that I’ve ever made. It gives me joy and satisfaction when I see happy people leaving our homes. I have realised that we should not commercialise or find profitability in everything—let some things just be,” she adds.

You may also like: Kerala Couple Create Self-Sustaining Green Paradise Out of Degraded Land!