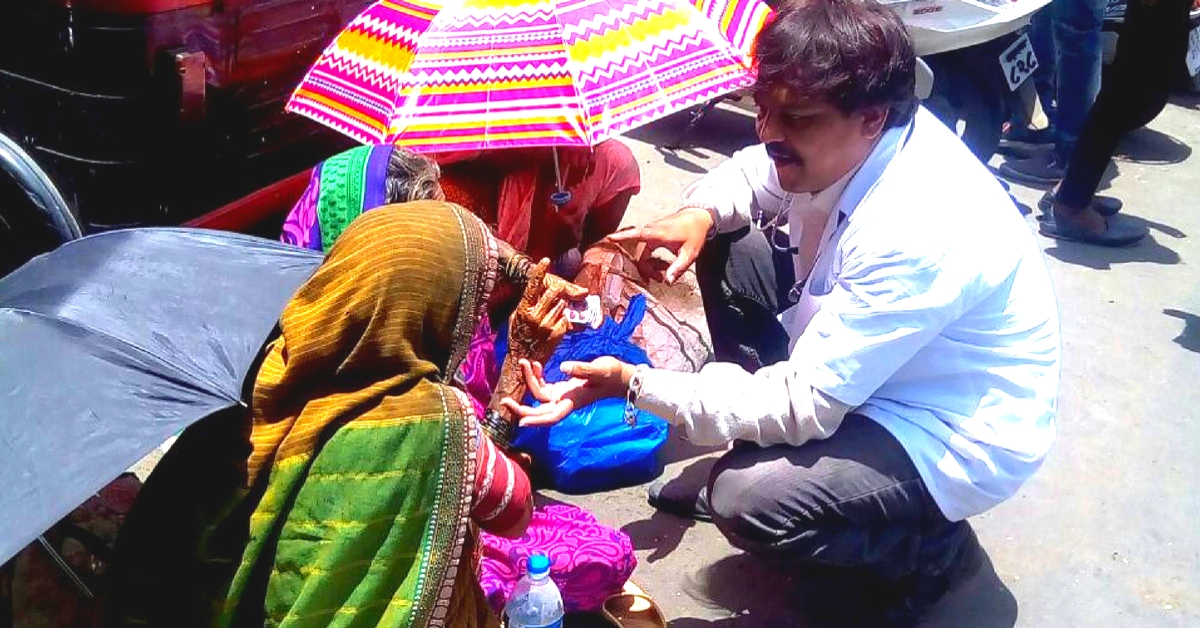 When doctors take the Hippocratic oath, they vow to do everything in their power to help save a life. And these inspiring ‘knights in white coats’ are going the extra mile to stay true to that promise! #HeroesOfHumanity #WorldHealthDay #Respect

The Hippocratic oath taken by physicians is one of the oldest binding documents in history. Among the many pledges doctors have to take, here is one:

“I will provide care to all patients regardless of sex, race, creed, sexual preference, lifestyle or economic status. In particular, I will volunteer some of my time to providing free care to the poor, the homeless, the disadvantaged, the dispossessed and the helpless.”

We, at The Better India (TBI), have brought you the stories of many doctors who have stayed true to this pledge. In a country like India, where access to basic healthcare is a real struggle for the poor and dispossessed, the service of doctors with a heart has proven deeply invaluable. These doctors do not merely represent the best of India, but also the world.

On World Health Day, here are five doctors who treat the poor and homeless for free:

Nearly a decade ago, Dr Manoj Kumar left his psychiatric practice in the United Kingdom and flew back to India. His objective was to address the mental health conditions of the rural population here.

“Kerala has a history of getting involved in social issues. I was a psychiatrist in the UK for about 15 years when I decided to come back to my roots and get involved with the community here. I could see that the governments are not doing enough to take care of mental illnesses and realised that a family-like model needs to be adopted to bring about a change,” he told TBI.

To aid his vision, Kumar founded the Mental Health Action Trust (MHAT) in 2008 in Kozhikode—an organisation that works on a decentralised model to provide mental health care to the rural populace. Leveraging technology, other experts in the field and the spirit of volunteerism among the people, Dr Kumar has not only brought about greater awareness, but also relief to many. For his services, Dr Manoj does not take a single penny.

Also Read: 7 TN Doctors Turn Saviours For the Poor & the Abandoned, Treat Them For Free!

On the streets of Pune, if you see a man in a white coat checking on the health of society’s most vulnerable, you’ve most likely bumped into Dr Abhijit Sonawane. Resigning from his job on Independence Day 2015, he decided to dedicate his life to cure the poor of their illnesses. That’s when he decided to establish the Soham Trust.

People living on the streets are vulnerable to all sorts of illnesses and serious diseases. Checking up on patients showing symptoms of contagious diseases or even minor illnesses, Dr Sonawane offers treatment and medicines for free.

“Initially, I aimed to provide beggars with medicines, so I started the ‘Doctor for Beggars’ initiative. But as I got more involved, I started giving them emotional support and tried to make them stand on their own feet. This is no more an initiative or project for me. I feel this is my responsibility as their son/grandson,” he told TBI.

Calling the initiative ‘Beggars to Entrepreneurs’, Dr Sonawane also tries to empower beggars to earn a living with dignity. Through his efforts, the good doctor has also helped 37 senior citizens to move on from begging and start small businesses.

Also Read: A Woman of Many Firsts: Meet India’s First And Oldest Cardiologist!

Started by his father Dr Manuel Durairaj, a cardiologist with the Indian Army for over two decades and honorary physician to three former Presidents of India, in 1991, Dr Manoj joined MCCRF to aid his father after finishing his studies at AIIMS, New Delhi, in 2005.

“I grew up seeing my father dedicate his time, money and medical expertise to treat the people who are far from quality healthcare due to monetary reasons and geographical distance. That inspired me to not just take up the profession that had the potential to make a substantial difference to people’s lives, but also continue his work of taking quality healthcare to those who need it the most,” he told TBI.

In a corner of Malsi, Dehradun, Yogi Aeron, an 80-year-old practising plastic surgeon, treats burn victims and those mauled by wild animals. Through the course of a year, he performs roughly 500 surgeries on burn and bite victims for free. To help him in this mission, he has an assistant who has worked with him for over 25 years while one of his sons come and help out whenever they can find the time. Such is their popularity that there are reportedly 10,000 patients on the waiting list from remote villages in the Himalayas who are awaiting treatment.

Besides working in his clinic, he also operates two-week camps across remote villages twice a year with around 15 doctors from the United States. They all treat patients for free with nearly 10 surgeries happening per day. Besides, he is also building a science park and topiary.

Also Read: Starting With a Small Clinic Under a Tree, This Doctor Has Helped 5 Lakh People in 60 Delhi Slums

Dr Pushkar Waknis, a maxillofacial surgeon based out of Pune, who essentially treats defects in face, jaw, and tissues in the oral and facial regions, operates on child patients with clefts for free. To the uninitiated, a cleft is essentially an opening or split in the upper lip that occurs when developing facial structures in an unborn baby don’t close completely. This hampers speech in the patients and can also pose a problem in eating.

Dr. Waknis wanted to initiate a programme under which he wanted to operate children with clefts without charging any amount. But lack of infrastructure was proving to be the biggest bottleneck.

“In 2011, I met Dr Neeraj Adkar, a dynamic orthopaedic surgeon who had opened a new hospital called Saishree Hospital in Pune. He was visibly excited about the project and offered to give the entire infrastructure of the hospital for it. It was launched in March 2012, and was named ‘Spreading Smiles’ by Dr Adkar.”

They operate on 25 to 40 children every year.

What all these doctors have in common is their dedication to the pursuit of public service. It takes a degree of personal conviction to serve people without expecting anything material in return. These doctors have it.

This isn’t a definitive list by any means. Back in July 2017, we came up with a similar list. You can check it out here.