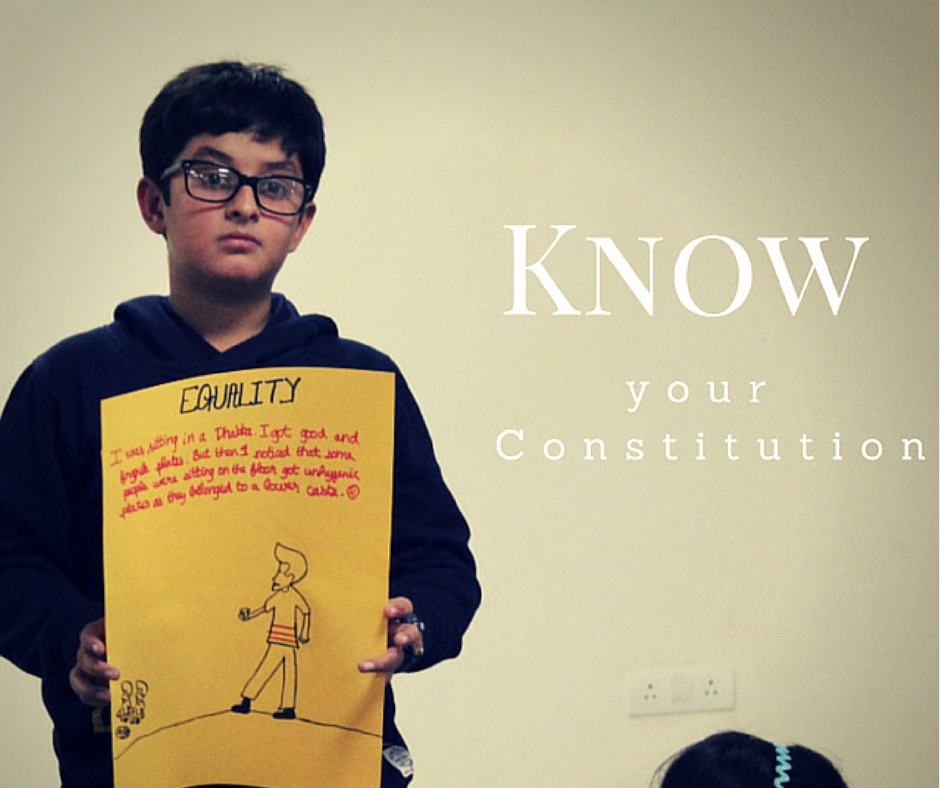 Though we have been living in the country since years, most of us are not aware of our rights and how to implement them. These Citizen Cafes can help you here. In just two hours, these workshops provide an interesting and deep understanding of our constitution and what it entails.

A school kid from Haryana attended a workshop on civic participation. When he went back to his school and saw a broken road along the way, he got his friends together and contacted the local MLA and political party. Taking his application into consideration, prompt action was taken and within a few days, there was a brand new road to the school.

This was all made possible by just a two-hour workshop on the basic rights of Indians and the Indian constitution.

This is one of thousands of examples where a better understanding of how to approach a problem has solved an issue on time.

The constitution has been part of our school syllabus and the entire country revolves around that. But how many of us actually know about these rights properly? When was the last time you exercised one of your rights? It is always easier to take shortcuts and blame the government, but as much as the government is responsible to perform its duty, we too are responsible to use the basic rights we have been given by the constitution and improve things.

There is a movement afoot. A movement reclaim the spirit of the Constitution: to reclaim the values of equality, justice and liberty for all.

It is taking the form of ‘citizen cafes’ led by young people from across the country, in their schools, colleges and neighbourhoods.

We The People (WTP), a non profit organization is taking the cause of responsible citizenship to the next level through their interesting initiative – Citizens’ Cafe. Started by Vinita Singh in 2009, WTP has been extensively working to engage the citizens to become more aware about their basic rights and how to implement them in their daily lives.

The Citizen Cafe is a dialogue focused on the Preamble to the Indian Constitution – its values, its relevance in today’s time and its call to action for all citizens. And it is setting off a fire of hope and meaning for the youth, especially in today’s time when our humanist values are being challenged.

“I am a Naga tribal. You are a Hindu. We are totally different. What links us? Only the Constitution! And I want all people in my village to understand this,” says a young girl from Nagaland.

“We all know that we have certain rights, but we hardly remember them, forget about implementing them. That is when WTP comes into picture,” says Raj Balaji from WTP. Started as a small knowledge sharing initiative, Citizens’ Cafe is a movement that engages thousands of people across the country.

The free-of-cost two-hours sessions engage people of all age groups and sections of the society and initiate a dialogue among them for a better understanding of our constitution. From understanding of the local governance bodies to learning how to fill certain forms and even whom to contact for various issues, the Citizens’ Cafe covers many grounds.

“From issues as basic as fixing street lights and potholes to bigger things like filing an RTI and PIL, Citizens’ Cafes provide better understanding to the participants,” says Balaji.

The fire can be seen in the way students of Bosco Institute in Jorhat, Assam are going back to their hometowns in Mizoram, Meghalaya, Manipur, Nagaland and spreading awareness of the one document that holds us all together.

In the Cafes, the leadership is being taken by young people. They organise and facilitate these Cafes, spearheading mass awareness. Some of them are as young as 15 years old – students of 11th or 12th grade who are leading Cafes for students of 7th grade.

Asked why they want to be involved, one answers, “We have so many doubts about ourselves and the country – where are we going, what do we stand for? Participating in the Cafe gives me a sense of certainty and direction. I feel inspired and I am able to inspire others too.”

Citizens’ Cafe operates in rented out spaces at different locations. Partnering with marriage halls, schools and corporates, the team makes sure to engage and educate as many people as possible. The team starts the dialogue between the participants who then discuss about the issues faced and how they can address them.

“The duration is just two hours to keep the people engaged and motivated throughout. It is easier to get people involved if it is just a couple of hours as it is quite a heavy topic,” Balaji says.

A team of 70 volunteers is trained to organize these workshops and they further spread out across India and reach out to more people.

The sessions are accompanied by follow ups and further help which the participants might require. The Citizens’ Cafe team is also engaging with the police community and asking people to interact with them about their work and personal life.

In its third year of operations, Citizens’ Cafe has come a long way. Last year, they reached out to 1,500 people through 45 cafes in eight states of the country and they have seen 100 percent growth this year when it comes to the reach.

Citizens’ Cafe has started an informative series of workshops in 16 states of India between November 26 (the day when the Constitution was enacted) to January 26th (the day it was enforced). The initiative aims to reach out to over 2,500 people by the end of the series.

Its impact can be seen in the way 11th grade students and teachers from the Isha Home school near Coimbatore are planning their Republic Day celebrations – 150 parents have been invited to a large Citizen Cafe. They will, together with their children, explore deeply the essence of the Constitution and the practice of equality and liberty in their lives.

Prakash, the principal of the Isha school says, “The Cafe is a wonderful way to excite young children about democracy and human rights. It gives them an insight into where the ideas of our nationhood emerged from. The most important thing is that it shows them that we stand for human values and that this is the biggest difference between us and many other nations of the world.”

They plan to reach out to one million people by the end of 2018. “A lot of teens and people of younger age are coming forward to attend the workshop. A guy from BITS Pilani wanted to get trained as he had a very big family and he thought this way he can educate them about their basic rights,” says Balaji.

Citizens’ Cafe is also aiming to partner with bigger corporates, schools and colleges to attract the most energetic and active crowd. To know more about their work, check out their Facebook page.