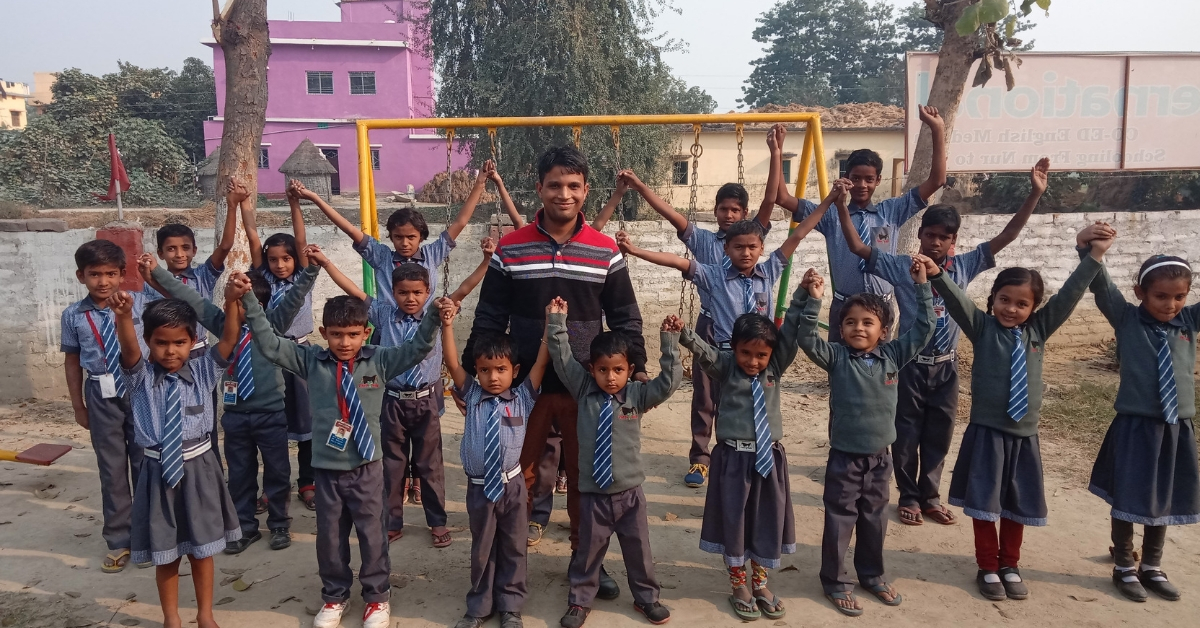 400 students are now a part of Prakash's school

Despite having a stable and respectable career in the Indian Air Force, Prakash decided to fulfill his dream of opening a school to provide quality education in his village in Bihar

Prakash Pandey grew up studying in a dilapidated government school in the Chorauwan village, located in Bihar’s Chapra district. The classrooms did not have benches, electricity would come and go, and classes would be cancelled in a random manner during school hours.

Ten years later, nothing has changed except that more number of children are now a victim of rural India’s deplorable state of education, says Prakash, who is currently serving as an Air Traffic Controller in the Indian Air Force tells The Better India.

Due to financial constraints, Prakash was not able to study beyond Class 10, but that didn’t deter him from moving to Delhi in search of job opportunities. After working in the private sector for a couple of years, Prakash joined the Indian Air Force as the Air Traffic Controller in 2012.

He got busy with work and life, and a year later, when he returned to the village during his leave, he realised that nothing had changed vis-à-vis the state of education—it was still in shambles.

During the course of my education, I had never touched a computer, never entered a library and there was always a shortage of books and faculty members. Upon visiting my village during my holidays, I saw that nothing had changed. This was disturbing, and it forced me to take action, says the 25-year-old.

Prakash decided to dip into his savings and open a school for the children of the village. But as they say, one has to pay the price to fulfil any dream, and this was true for Prakash as well.

I had a stable and respectable career, so my parents didn’t like that I was spending my savings for a social cause. The situation was pretty bad, and my mother even stopped speaking to me for a while. Also, it didn’t end there. The villagers called me insane for taking such a huge risk without any profitable outcome, he says.

However, Prakash was determined to continue with his plan and states that qualities like perseverance and the commitment to strive for a better future, which were imparted to him by the IAF, came in handy.

Turning Home into a School

Charity begins at home—Prakash took this saying seriously enough and in 2017, converted his house into a full-fledged paathshala (school).

Juggling between his job in Delhi and his dream of building a school, Prakash utilized his 90-day leave in a fruitful manner. Every time his leaves would be approved, he would rush to my village and monitor the work in progress.

Finally, the school was ready. The classrooms had benches, blackboards and fans, and there was uninterrupted electricity. The school also had computer labs, and Prakash says that his attempt was to ensure that every facility denied to him and countless children across India, was included in this school.

His next step was to induct a qualified teaching staff. He identified several women from his village who had cleared their Intermediate exams but were not working due to family restrictions.

I was surprised to see the number of educated girls in my village, considering the rate of illiteracy in Bihar. However, the education provided was not at par. Even those girls had never touched the computer, says Prakash.

He approached them and took the help of his friends to conduct rigorous training sessions for the women. The training involved providing basic knowledge in math, science, history, sociology, and environment and computers.

Thanks to these efforts, 22 women, which were trained for six months, were now ready to teach.

The final step was to enrol the students. He conducted a survey, which, to his surprise, revealed that the elders of the family, were responsible for the high dropout rate.

“A majority of our village is engaged in farming, and the only aim of parents is to make their children financially independent even if it means doing menial jobs. Education is given the least importance.”

Accompanying the teaching staff, Prakash visited hundreds of households convincing families to send their kids to school. However, only 25 came forward.

A few days later, I realised that many parents were hesitant to send their children to school, because of the fees.

Meanwhile, Prakash also launched his ‘School Chale’ (Let’s go to school) campaign. Under this, he visited several homes and distributed 500 free educational kits which included books and other school supplies.

The campaign was successful, and the number of children in the school increased.

It has been 18 months since the school was opened and currently, 400 children are studying in the school in classes 1 to 8.

Although the government has granted permission to Prakash to conduct classes till Class 10, he is restricted by the lack of space and faculty. However, to compensate, Prakash recently started after-school computer classes for girls studying in Classes 8, 9 and 10, and 50 of them are now a part of the six-month computer training programme.

As the school is self-sustainable, teachers regularly get their salaries and Prakash uses his savings for other school-related expenses.

To concentrate fully on his mission, Prakash plans to quit the IAF and work on building more such schools.