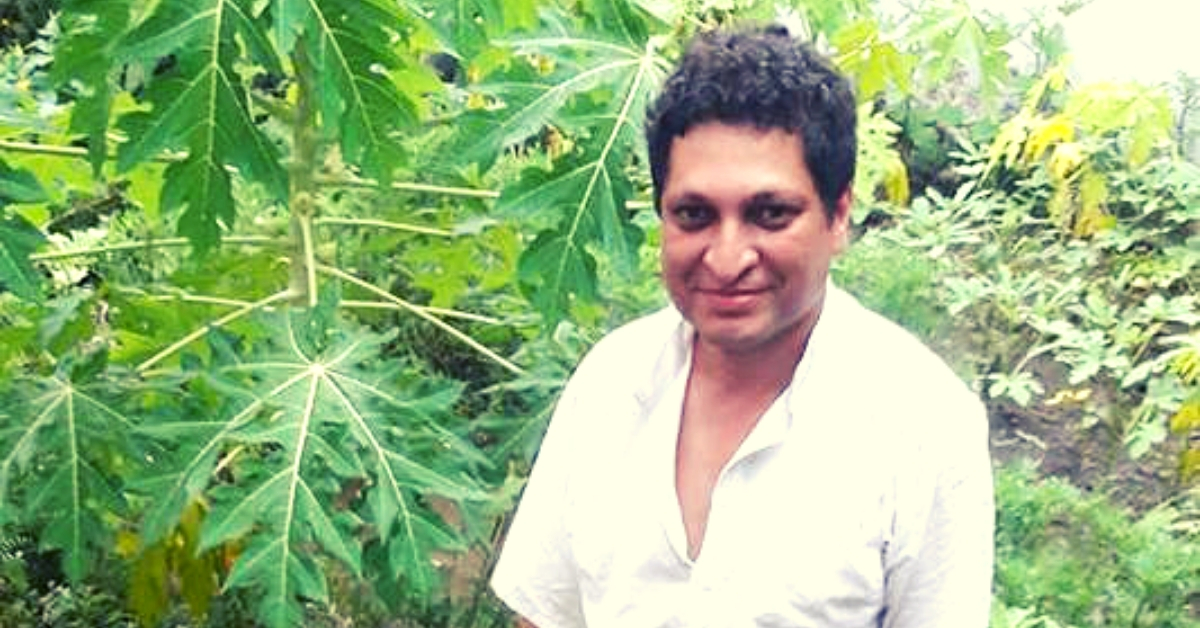 With help from bees, monkeys, earthworms, birds and snakes, read how 44-year-old Sandeep Saxena converted an absolute rocky and barren land into a thriving ‘Food Forest’ within a span of four years

“If you make cats responsible for a coop of chickens, they will first wipe out the birds, then fight among themselves and perish. In the end, they end up harming what they were supposed to guard,” says Sandeep to The Better India (TBI).

It is rather uncommon to draw an analogy between cats and the fragile state of the world, but this is how Sandeep Saxena, the man behind developing 6000+ acres of ‘Food-Forests’ in villages of Hoshangabad district, Madhya Pradesh, chooses to make his point.

In 2006, Sandeep, an alumnus of IIT-Kanpur and IIM-Lucknow, returned to India from the United States. He was employed at an MNC, and one aspect of his work involved researching the Indian economy.

It was during this extensive research that he realised the extent of the agrarian distress in our country.

Across the country, forests are being chopped in the name of development, and groundwater tables are depleting at a fast rate. As the green cover reduces, the effects of climate change become more pronounced resulting in erratic rains and crop failure. Consequently, it is our farmers who suffer the most, says Sandeep.

He was particularly distressed by the mounting gap between the supply and demand of food.

The population is exploding, and land available for producing food is decreasing. It doesn’t take a genius to foresee the impending food crisis.

Determined to work towards a solution, Sandeep quit his job in 2007 and founded Aranyaani to fulfill his mission.

For nearly two years, he studied the ecological conditions of different regions around India and finally came across the concept of ‘Food Forests,’ that are created naturally without exploiting any resources.

In fact, even an existing forest can be restructured and a part it can be used for human consumption without affecting its ecological balance.

“As I travelled to the interiors of Madhya Pradesh and saw the rocky patches, that had been denuded for mining and were no longer good for agricultural purposes, it dawned upon me that these were once thriving forests. I took upon that as a challenge and convert those lands into food forests that produce top quality food,” says the 44-year-old.

Describing the structure of ‘Food Forests,’ Sandeep says that first hardy trees like the banyan and peepal are planted in the centre of the land. Next, fruit-bearing trees are planted surrounding the centre trees. Then, vegetable shrubs and bushes are planted between the enormous trees and fruit trees. Finally, on the outer circumference, lentils and legumes are planted.

Although shrubs are infamous among the farming community, they act as temperature controllers and moisture trapping plants for the roots of hardy saplings.

“When the seeds are sown they are not tilled. Instead, they are wrapped in soil materials (soil, manure) are directly sown into the land. The benefit of this method is that it maintains the nitrogen cycle of the soil and its fertility,” says Sandeep.

In 2012, Sandeep experimented with this process in his farm in Sohagpur. In 100 acres of land, the roots of the hardy plants were set after a year. In the following monsoon, other plants were planted.  He also grew medicinal plants like vetiver, neem and moringa.

“By the fourth year, we had a vibrant system—pleasant enough in the summer heat, with a small layer of biomass present. The plants would support each other in handling cold winters, heat and draining excess rainfall. Finally, it was time for the last layer, and we planted turmeric, coriander, sweet potatoes, and other similar plants. In about four years, the land, which was rocky and barren, became a thriving food forest,” he says.

The best part about following Sandeep’s method is that the produce is entirely organic, and human intervention is limited. Everything that is not natural, like high-tech machinery, chemicals, artificial additives, hybrid seeds, and fertilisers, are avoided.

If Sandeep has rejected all the conventional methods of farming, how did he manage to develop a man-made forest all by himself?

Well, he took help from honey bees, earthworms, microbes and snakes, birds, and other animals!

While the earthworms replaced the millions of nano-JCB machines to keep the soil channels open, the bees helped in the fertilisation process.

As the word got around about his 2,500-acre man-made forest, farmers started approaching Sandeep for help.

The organisation started assisting them, and till now, 400 farmers from several villages have benefited from this exercise, and grown food forests on 4,000 plus acres of land.

It took four years for Sandeep to develop a full-fledged forest with over 175 types of trees and plants. The large trees continuously drip water, and this has helped in the formation of streams.

In this manner, the flora and fauna have both been rejuvenated.

Ashok, one of the many farmers who is now reaping the benefits, says, “I was ignorant about the damage caused by chemicals and fearing that I would not produce enough supply, I would often resort to unnatural practices. The food forest has been a boon for me as people from far away regions come here to buy the natural produce. My income has increased by Rs 6,000, for every acre of land,”

These forests in MP’s villages contain both organic and exotic produce. Aranyaani has recently started to sell the produce online, across India, to help the farmers fetch a reasonable price.

According to Sandeep, today, except the farmers and environment, everyone else is benefiting in the agricultural business.

He hopes to change that through these man-made forests.

Even though these food forests take 4-5 years to develop, they will have a significant impact in the long run, and restore the eco-system, he adds.

To order or inquire about Sandeep’s technique you can visit Aranyaani’s website here.