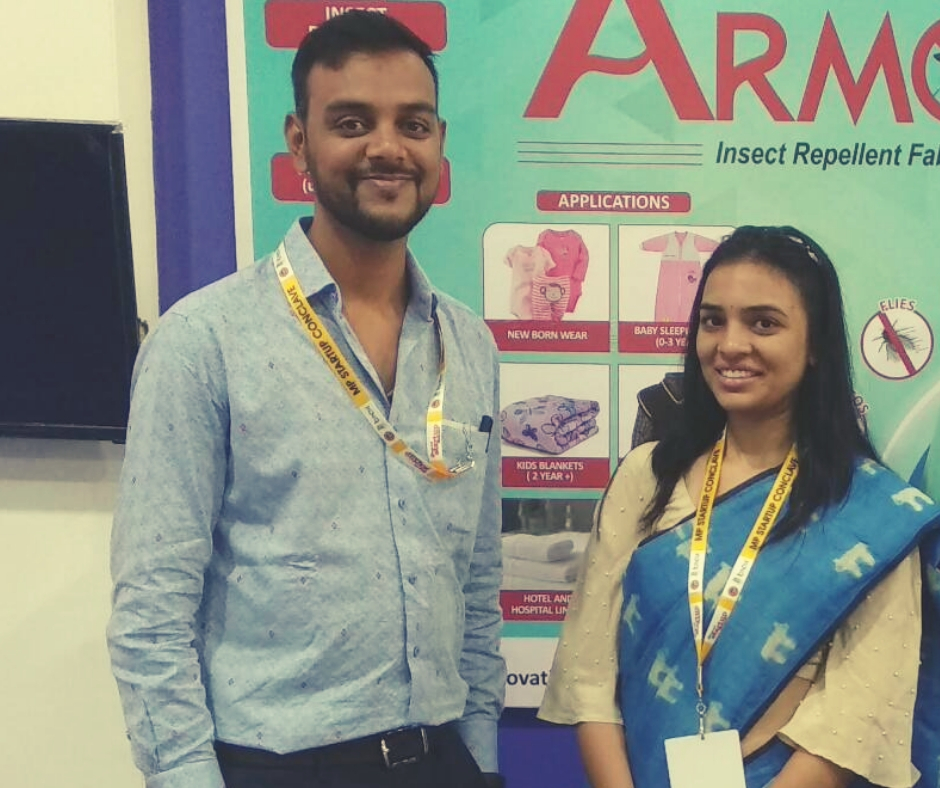 The patent-pending ‘armour’ tech also makes the fabric anti-microbial and anti-bacterial. Moreover, it can be used to treat curtains, bed linen, and upholstery!

As a parent, how often are you willing to apply a mosquito repellant cream, lotion or patch to your newborn?

Known to contain DEET (N, N-Diethyl-meta-toluamide), prolonged exposure to these products can cause serious health issues, especially among the younger ones. This is an issue which vexed both Mayur Malpani and Shreshtha Bhutra when they had their first child two years ago.

“In the first year, we faced a lot of issues with insect bites. Whenever we changed our baby’s clothes, we spotted insect bite marks, particularly from ants and mosquitoes. Addressing the problem at hand, we initially developed a mix of natural oils derived from eucalyptus and lemongrass. However, its repulsion effect only lasted 7-8 hours,” Mayur tells The Better India.

Mayur is a graduate in textile engineering with a masters in product designing and global marketing from the United States, who worked in Bengaluru as a management consultant for a couple of years. Shreshtha, meanwhile, is an MBA graduate with experience in the private banking and apparel manufacturing sectors.

Both partners understood the science and business of fabrics and figured a solution could be found.

That’s when an idea emerged for the development of Armour Insect Repellent Technology, which is used today to manufacture insect-repellent, anti-microbial, and anti-bacterial fabrics.

Since its inception in 2017, Clothing Innovation has come up with a patent-pending formula called Armour Insect Repellent Technology, which “factory treats” fabrics to ensure “they repel insects like mosquitoes, flies, ticks, chiggers, ants and no-see-ums”.

“We use our proprietary methodology to treat fabrics. It begins with developing an active ingredient derived from a synthetic form of insect repellant found in specific flowers. When the solution containing this active ingredient is applied using nanotechnology, it completely binds it to the fabric. As a result, the ingredient cannot be washed off entirely. Whenever there is an insect, the active ingredient works as a heating layer on the fabric, which repels all insects,” informs Mayur.

This technology applies to all fabrics except silk and velvet.

Undergoing the incubation process at NSRCEL, both co-founders received guidance and mentorship in 2018-19. Spending nearly 18 months developing this formula, they were ready to go.

“Coming from a textile background, we understood how to combine fibre and fabrics. We experimented with the idea, brought out an initial product, and got the testing and approval for the product. We contacted Intertek Labs, a US-based international laboratory to certify our product. We adhered to WHO standards and were soon certified by them,” claims Mayur.

They are also a DIPP-registered startup, which opens up avenues for selling innovative products that are not replicated. The startup has also been certified by the Bombay Textile Research Association (BTRA), stating that the product is safe and efficient for up to 70 laundry washes.

Strictly adhering to safety and protection standards laid down by the WHO, the startup today is soon launching their crowdfunding campaigns to sell a range of products that include shirts, hoodies, and baby sleeping bags.

After designing the fabric with prints in vogue, they treat it with Armour technology, and sell it under their own brand name ‘Armour’.

“Right now, we are at the developmental stage of various products, but we have launched Armour shirts for children from 2-16 years of age. We are seeking safety certification from authorities in the UK and US as well, so that they can be applied to our products sold there,” he says.

In the 18 months since the startup began selling its products, its made its presence in Tamil Nadu, Kerala, Karnataka and Andhra Pradesh, besides partnering with more than 170 retail counters to treat the shirts, jackets, and linen they sell under their brand.

“Currently, Armour shirts make up a majority of our sales. Recently, we launched our brand in the US through Amazon, and have clocked in a turnover of around Rs 30 lakh in 3.5 months. The brand we launched in the US makes bedsheets and pillow covers which are insect-repellant, anti-microbial and anti-bacterial. We are not selling these in India because of lowers awareness levels and are unable to match the pricing for average bedsheets in India,” he informs.

Applying Armour technology comes with its own set of costs. For example, the difference between conventional baby clothing found in the market and one protected by Armour technology amounts to almost Rs 100-150 per unit.

Selling directly to customers becomes a hard pitch, especially if they aren’t aware of insect-repellant fabric. What consumers should be aware of is the prevalence of vector-borne diseases.

There is a reason why the mosquito repellant industry in India is projected to touch $800 million by 2021, according to this survey. People are aware of its dangers and what they must do to protect themselves. 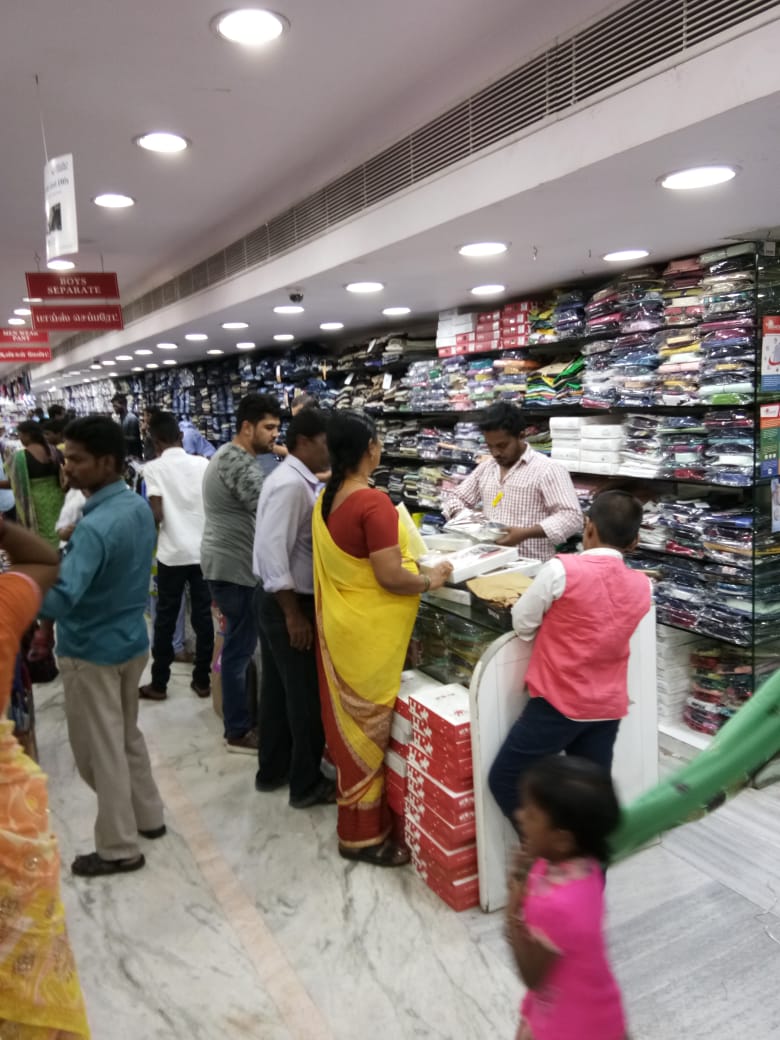 Despite these challenges, things have begun to pick up for the startup, which claims to have sold products to the tune of approximately Rs 1 crore in the current financial year. Among other products, it has sold 50,000 shirts and baby apparel along with 6,800 bed linen products thus far.

It’s a completely bootstrapped venture with the couple investing Rs 25 lakh each into the venture. The startup employees over 50 people, including a chain of women workers from local self-help groups. Mayur claims that under a quarter of the production is done by women from these SHGs.

“When we get an order of 100 pieces, 25-30 pieces are worked upon by these ladies. We pay them for their services. This isn’t a CSR initiative, but an attempt to create micro-scale opportunities for these SHGs. We don’t employ them directly, but in a way, help them to set up their own ventures. Clothing Innovation can treat 1,00,000 metres of fabric, and manufacture 25,000 pieces per month,” he informs.

Despite their success, the question that remains, ‘Why set up shop in a Tier-II or III city like Indore’?

For starters, the couple had family property in the city which significantly reduced the initial outlay of capital. They built up that land to set up a small manufacturing unit and a lab to treat fabric. Then, they finally acquired loans to run the manufacturing unit there.

Having lots of contacts in the city, unlike in say Mumbai or Delhi, really helped them establish their business without any major hiccups.

“However, getting investors on board remains a challenge. But we have lots of confidence in our product and are sure that one day when we open ourselves to investors from Tier I cities, they will be confident of investing in us. Indore is a Tier-III city but comes after Kolkata and Delhi in the list of major cities for the production of kids wear in India. Indore will soon overtake Delhi and Kolkata,” he claims.

In the coming days, however, the startup will initiate a Kickstarter, Indegogo-like campaign to launch its products for Asia.

“The vision of our company is to find a place for our products in the health kits WHO and UNICEF deliver to health and natural emergency-affected areas. Every year, these organisations come up with a health kit in which they list all essential products for mothers and newborn babies or anyone in these parts. They take the responsibility of sending people these health kits, and we want our products to find a place in these kits,” concludes Mayur.

Furthermore, the startup has expressed a keen interest in collaborating with governments.

For example, they have recently received an order worth Rs 15 lakh from the Maharashtra government to manufacture insect-repellant school uniforms for tribal areas, which will come in handy during the monsoon season.

You can visit them on their social media page here for further information.