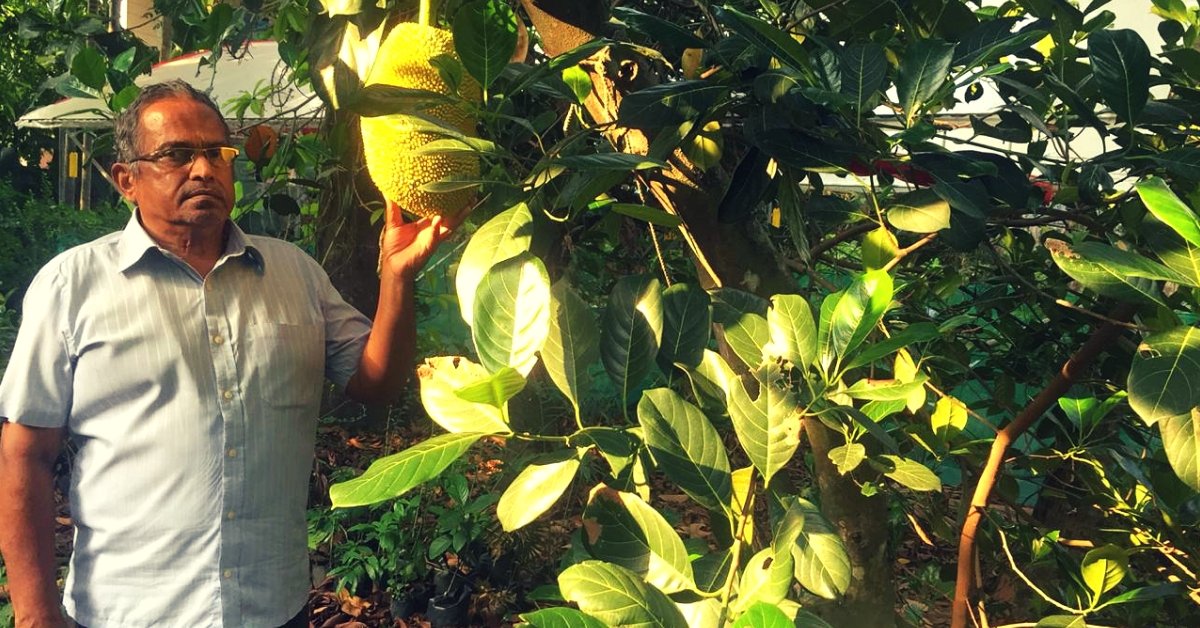 Located in the bustling metro city of Kochi, Alungal Farms is his labour of love and sweat. It boasts over 2000 varieties of rare medicinal plants, 400 varieties of fruits, different flowers, vegetables, herbs, and even spices—all of which thrive in wild harmony!

Approximately 650 years ago, when the inquisition of Goa by the Portuguese led to mass conversions, a huge group of people fled the state in rickety boats, hiding in gigantic cooking vessels. They settled in the coastal areas of Kerala.

AV Purushothama Kamath’s ancestors were among this group, and when he was a child, his mother would narrate stories about how the former Maharaja of Kochi welcomed their community.

In the late 19th century, his father purchased a resthouse from the king in Ernakulam and converted it into a family home—the same one that Kamath currently resides in.

Evidently, the 130-year-old home has a rich history attached to it. However, its ancient windows and intricate tiles are not what we wish to focus on.

The subject of this story is the two-acre man-made forest, which lies at the heart of this home.

Located in the bustling metro city of Kochi, Alungal Farms is Kamath’s labour of love and sweat. It  boasts over 2000 varieties of rare medicinal plants, 400 varieties of fruits, different flowers, vegetables, herbs, and even spices—all of which thrive in wild harmony!

Despite being a stone’s throw away from a metro station and the Vyttila Mobility Hub, its canopy of lush greens is home to several migratory birds and butterflies.

And although the land sharks continue to throw bundles of money in the name of development for cents of his land, Kamath is unwilling to let commercialisation ruin the sanctity of this forest.

The Better India got in touch with him and his son Anand to know more about how this journey began.

Building his own forest

Kamath began his stint as a banker in the late 70s. His job involved frequent travel, and somewhere along the way, he started to collect rare medicinal plants during his trips.

In 1984, he quit his job due to his mother’s failing health and returned to his ancestral profession—farming.

He began with cultivating paddy and coconut in 20 cents (8,712 sq ft) of land. It was also around the same time that he actively started collecting endangered species of plants, mostly medicinal, and growing them.

In 1996, he gave up the use of chemicals and began the extensive forestation project.

The method was simple. The bigger plants that could create a canopy were planted close to the boundary walls, and when you moved inside towards the home, the smaller plants, vegetables, fruiting trees, shrubs, and medicinal plants were grown.

Today, the two-acre plot which is almost the size of football fields houses a wide range of medicinal and fruit plants, some of which are highly endangered.

The highlight of the farm though is the range of medicinal plants like aloe vera, ashvattha, ashoka, rudraksham, brahmi, devadaru, eucalyptus, and jatropha to name a few. There is also a nursery with 700 varieties of plants on sale!

Every tree on the farm has a board next to it, where its scientific and Malayalam name is clearly mentioned. This is immensely helpful for students of botany and Ayurveda who come for field visits.

The farm is water-efficient as it uses drip irrigation. The water for the farm is sourced from a pond spread across six cents of land. The pond which doesn’t dry up even in summers also acts as a reservoir for other homes in the area.

The farm has two desi Kasargod dwarf cows and poultry like hens, cockerels, quails etc. While the eggs from hens and quails are sold, the dung from the cows is used as manure.

Anand, Kamath’s youngest son, speaks highly of the waste decomposer. The solution sold in a bottle, which is a consortium of microorganisms, can decompose organic or bio-waste within 30-50 days.

The solution can be multiplied by adding the bottle which costs Rs 20 to a drum containing 200 litres of water and 2 kg of jaggery. All the farmer has to do is, turn the mixture after seven days, until the mixture becomes creamy.

This can be administered to the plants using drip irrigation.

So, how do the Kamaths earn a living?

Apart from selling their organic produce from 84 coconut trees, the banana plantation, and assorted plants, they also gain some income from a property they have rented.

Anand, who also worked as a banker for close to 16 years, adds that he decided to quit his job three years ago to carry forward his father’s work. His wife, Shyama, a dentist, and two children continue to extend their full support.

The activities on the farm have strengthened the familial bonds even more over the years, says Anand to The Better India.

“My biggest inspiration to join my father was my nine-year-old son. He is my father’s first shishya. He is an absolute natural at farming. I would often look on in awe every time my father planted a new plant—he would ensure that if there were two seeds, he would plant one and my son would plant the other. From preparing manure mixing cow dung to naming the rare medicinal plants, his passion inspired me to carry my father’s legacy forward,” says Anand.

Kamath’s 35 years of effort have reaped rich dividends, and he has won numerous including the Kerala Biodiversity Award 2013 and the Vanamitra Award by Kerala Forest Department.

The farm has also been chosen under the Central Government’s ATMA initiative, which makes it a model farm school for smaller farmers to get tips on the best techniques on cultivation and improving soil health.

Real estate lobbyists and even telecom operators often line up to buy land from Kamath, but he refuses to give in.

“They begin with the pretence of wanting to know more about the plants and at the end of the tour, ask if we want to sell the land. A certain telecom operator sent one of its employees with the same technique and wanted three cents of our land. They made it sound like we were winning a lottery if we allowed them to set up a tower. I politely asked them to leave and never return. There is nothing that will make me give up my farm,” he says.

Does Kamath have a message for the youngsters?

“We are at an age where everything has become a monetary calculation. So I have a message to give using this math itself. Assume a human being needs three oxygen cylinders to live each day, and each cylinder costs Rs 800. You spend Rs 2400 a day, and almost 8,64,000 a year! However, trees give you oxygen for free. Yet, we do not think twice before we chop them to the ground. My only message for people is to grow trees and protect them. I am proud to have so many trees and rare species of plants. I think it is my way of being able to create nature for nature. It’s the least we can do.”

Kamath is a Vanamitra (friend of the forest) just like his award says, in the truest sense of the word. We cannot thank him enough for building a green lung for Kochi and hope his story continues to inspire more people to take a step towards a greener and sustainable life.