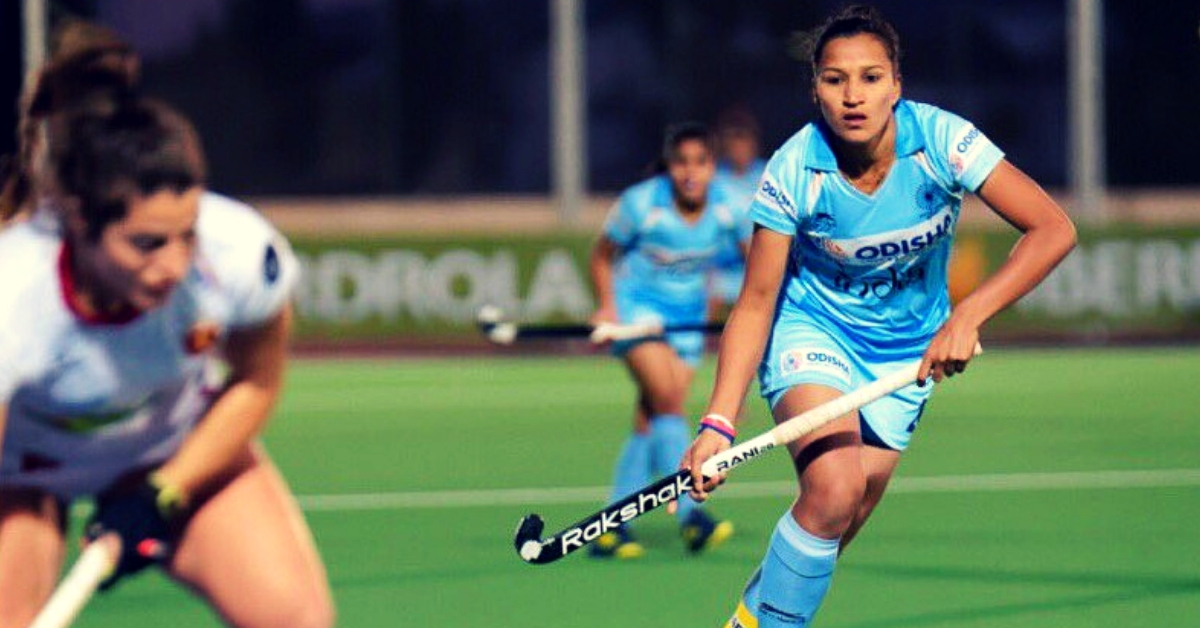 She was only 14 when she made her debut to the senior Indian Women’s hockey team as the youngest player.

Hailing from the small town of Shahabad Markanda in Haryana’s Kurukshetra district, Rani Rampal set foot on the hockey field at the tender age of six.

Known as Sansarpur of Haryana, after the hockey hub which gave India top players like former women’s team captain Ritu Rani, Rajni Bala, Navneet Kaur along with drag-flicker Sandeep Singh and Sandeep Kaur, Rani Rampal’s journey into hockey was anything but easy.

She was only 14 when she made her debut to the senior Indian Women’s hockey team as its youngest player.

When India qualified for the 2016 Olympics after a solid 36 years since the 1980 Summer Olympics, she made the winning goal.

It wouldn’t be an understatement that this iron-willed daughter of a cart puller has taken the nation by storm with her performance on the field year after year.

Today, she is leading a brigade of top players as the captain of the national senior women’s team!

In an exclusive interview with The Better India, she narrates, “I grew up in a place where young women and girls were restricted to the four walls of the home. So when I expressed my wish to play hockey, neither my parents nor my relatives supported me. My parents come from a humble background and weren’t very educated. They did not think sports could be a career path, not for girls at least. Besides, my relatives would often tell my father, ‘What will she do playing hockey? She will run around the field wearing a short skirt and bring a bad name to your family’.”

The same people now pat her back and congratulate her when she is home.

When she first started playing, Rani did not think she would be in the national team or get a job as an Assistant Coach with the Sports Authority of India. Her dream was to build a home for her family.

If you looked at the swanky building she built for her parents in Shahabad in 2016, you would find it difficult to believe that she once grappled with acute poverty. The building bears the five Olympic rings on the top!

Rani grew up in a humble home where her father worked as a horse-cart puller and sold bricks to make ends meet. The money was never enough to sustain the family of five.

She recalls how their kachcha home would often flood during heavy monsoons, as young Rani and her two brothers prayed for the rains to stop.

Speaking to The Better India, she says, “I knew I wanted to play hockey. But the expenses that came with it–training at an institute, buying a hockey kit or even shoes–were beyond what my father could afford. This, coupled with the societal fears of my parents, made it difficult for me to convince them. I remember pleading to them, ‘Give me one chance, look at me play, then if you think I am doing something wrong, I will stop’.”

And she did not disappoint them.

Her constant support during this period of crisis was her coach, Dronacharya Awardee Sardar Baldev Singh. He took her under his wing and started training her at the Shahabad Hockey Academy.

“He supported and encouraged my hockey dream when nobody else did. From giving me hockey kits to buying shoes, he helped me with everything. When I scored a difficult goal at the academy, he gave me a Rs 10 note. He signed it and wrote, ‘You are the future of India.’ It is one of my most treasured memories. While I did try to save the note as long as I could, our financial state at the time was so poor, I had to use it.”

When she was training at Chandigarh, he made sure that she lived with his family, where her dietary needs were taken care of by his wife.

“More than hockey, he taught us to help each other. To guide younger players restricted by financial issues, help them with kits and any other support they needed.”

This is a trend that continues at the academy.

The selection to the Indian hockey team wasn’t a cakewalk. In fact, it was much like an arduous trek.

“Training was tough in all weathers. And discipline was the first value we were taught. We would train for hours and never miss a single day. Punctuality was foremost. When we turned in late, we would be punished by our coach, who was a strict disciplinarian. Almost nine players from the academy were in the national team back then. Their stories further pushed us to work hard and prove our merit.”

Her hard work did not go to waste.

You May Also Like: Meet Harmanpreet Kaur, the Woman Behind India’s Historic Entry Into World Cup Finals With 171 Runs

In the June 2009 Champion’s Challenge Tournament held in Russia, Rani scored four goals in the finals and won ‘The Top Goal Scorer’ and the ‘Young Player of the Tournament’.

She competed in the 2010 Commonwealth Games where she was nominated for FIH’s (Fédération Internationale de Hockey) ‘Young Woman Player of the Year’ Award. Her performance in the 2010 Asian Games at Guangzhou made her a part of the All-Star team of the Asian Hockey Federation too.

At the 2010 Women’s Hockey World Cup held in Argentina, she scored seven goals placing India ninth in World Women’s Hockey rankings. This was also considered India’s best performance since 1978, where Rani won the ‘Best Young Player of the Tournament’ for her stellar performance as the top field goal scorer.

She represented India in the Junior World Cup 2013 where we won a bronze medal for the first time. Here too, she won the ‘Player of the Tournament’.

In 2016, she was honoured with the Arjuna Award.

Under her captaincy, the Indian team clinched silver at the 2018 Asian Games, finished fourth at the Commonwealth Games and eighth at the London World Cup.

And despite the laurels, when I ask her what is her biggest achievement, she humbly answers, “It is the honour of leading the women’s hockey team.”

From being considered underdogs on the world hockey stage to their recent tour to Spain where they pitted and won matches against stronger teams of Ireland and Spain, the team has certainly come a long way.

Their first friendly match against Ireland was a 1-1 draw, but the second and final matches saw them beat the world cup silver medallists with a 3-0. The team was a good mix of senior as well as junior players.

“As a senior player and captain, it is my responsibility to take younger players along, encourage and give them the required exposure to international matches. We want to thank Hockey India for making the tour possible,” says Rani.

When asked about clinching silver at the Asian Games where they lost to Japan and missed the guaranteed direct qualification in the 2020 Tokyo Olympics, she says,

“We were extremely disappointed when we did not win. But no matter how big the match is, the nature of the game demands that we move on and work harder. And we haven’t lost sight of our goal. The Spain tour gave us the much-needed confidence. The team now believes that if we play well, we can beat anyone. And so, every day at the training, we give more than our hundred per cent. We want to get Indian Women’s Hockey on the world map. Our eyes are set on qualifying for the Olympics 2020.”

When I ask her if anything has changed in the way the Indian audience perceives women’s hockey, she answers, “From the time I started playing hockey, a lot has changed. Back in the day, women’s hockey did not get the recognition or appreciation it deserved. But over the last few years, this has changed. People have taken interest and are appreciating the sport. But it more limelight and support.”

Not just hockey, but badminton, wrestling or weight lifting, women are dominating several sports, and it is a trend that needs to continue, believes Rani.

She signs off with a special message for young girls and women:

“Women need more self-belief. And we, as a society, can help them by believing in them and encouraging them to chase their sports dreams. To women, I say, don’t consider yourselves secondary to anyone. Set your own goals and chase them with determination. You can do anything. It is only when we believe in ourselves that others will believe in us.”