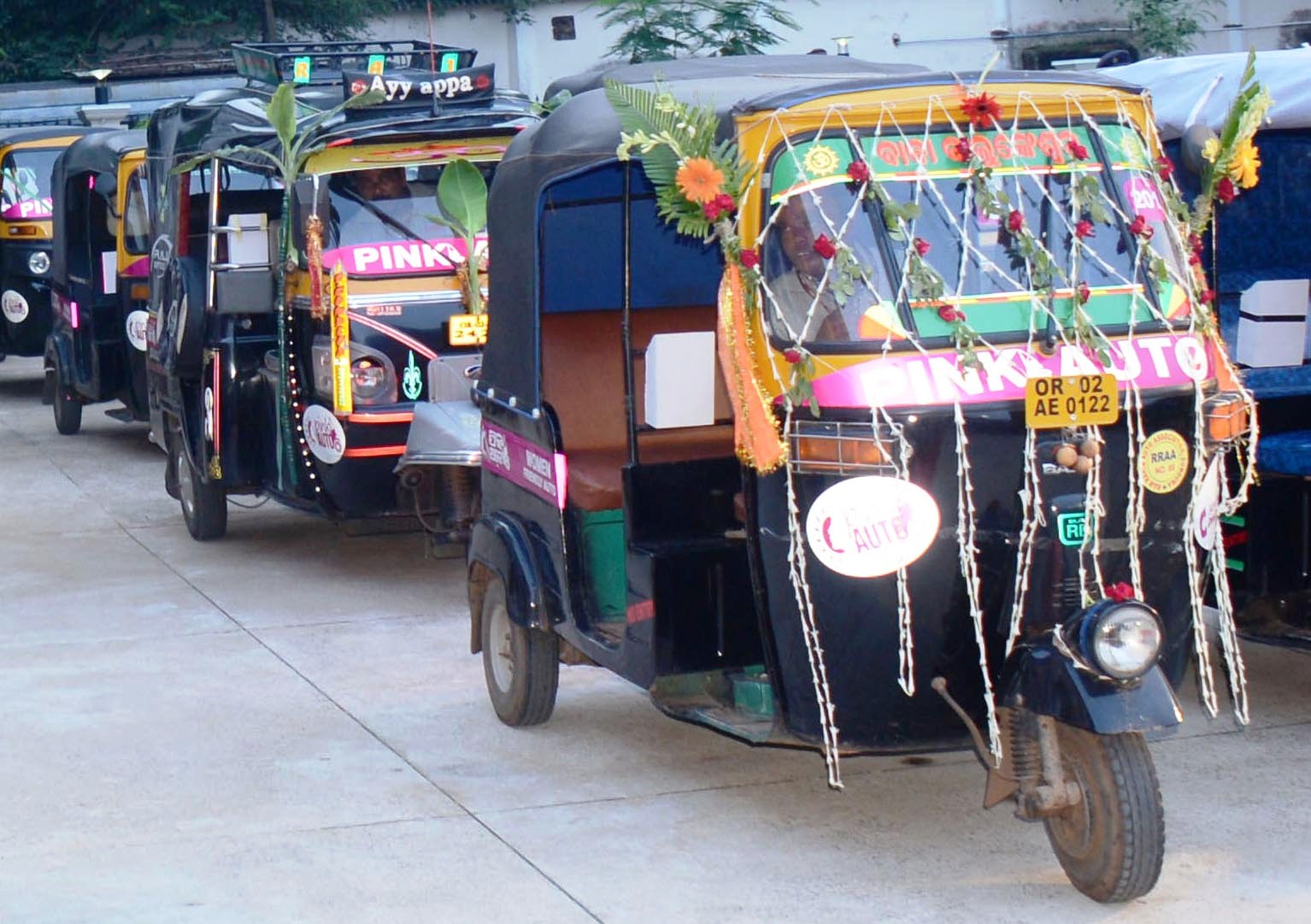 The Pink Auto service in Bhubaneswar, endorsed by the local police, has made mobility and access to the city simpler and safer for thousands of women and girls commuting every day. (Credit: Rakhi Ghosh\WFS)
Promotion

The pink autos plying in Bhubaneshwar have drivers who have undergone a strict psychological test, criminal background check and training. With a big question mark on women’s safety in India, this seems like a feasible solution. Know more about how pink autos are emerging as the safer mode of transport in Odisha.

Even as India marks the second year of the tragic rape and killing of a 23-year-old student in Delhi, an incident that triggered extensive debate on women’s safety in public spaces and even forced the government of the day to enact the Criminal Law (Amendment) Act 2013, widely termed as a “bill of rights” for women, the news of the rape of another young professional in the capital returning home at night in a ‘secure’ taxi has once again forced everyone to reassess the state of public transportation in cities across India and issues related to women’s safety.

In Bhubaneswar, the state capital of Odisha, Ranjita Mallick, 17, has her own nightmarish story to share. This student of a city college was returning one evening from classes at 8 pm when she found herself in a very vulnerable situation.

She narrates, “That night I took an auto rickshaw home. Initially, I was alone in the vehicle. Later, two men got in. I realised that they were drunk when they started misbehaving with me and touching me inappropriately. When I shouted the auto driver stopped the vehicle and I immediately ran from the spot. But the two men didn’t give up. They started following me. When the auto driver tried to stop them he was simply thrashed up. Mercifully, I reached a busy market area and went to the nearest PCO (Public Call Office) booth from where I called my mother. Till she came to pick me up, I was shivering with fear.”

Of course, there are many girls and women across the twin cities of Bhubaneswar and Cuttack who have been through similar experiences. According to Sujata Panda, former Inspector In-Charge of the Mahila Police Station, Bhubaneswar, “As the city grows and opportunities rise, more and more women are stepping out of their homes for studies or jobs. While some make their own transportation arrangements everyone cannot afford it. Women commuting by public transport are vulnerable to harassment and abuse by mischievous troublemakers. There have been some cases of rape and abductions in the city where the auto drivers were involved.”

Today, however, there is one transport service in Bhubaneswar, endorsed by the Bhubaneswar-Cuttack Police Commissionerate, which is not just making heads turn but also offering some hope and comfort to the thousands of women and girls commuting every day. It’s the Pink Auto service, which not only has the ‘women-friendly auto’ sticker on the vehicle with a first-aid and suggestion box on board, but its drivers have gone through extensive psychological tests and social and criminal background checks before being certified to ply on the streets.

“Before launching the service earlier this year we ensured that the auto drivers went through a thorough psychological analysis and special training to help them interface better with women passengers. A trained psychologist observed around 270 drivers, who had been selected only after we had looked into their social background and checked if they had any previous criminal record. Among them, 200 drivers cleared the test on every parameter.”

To provide a safe travel experience to women, the Police Commissionerate has opened up five kiosks in important locations in the city. These are equipped with phones that are also integrated to the police control room. Female passengers can dial the landline number to avail of the service and in case there is any problem they can be easily be tracked by the police.

Plans are in the offing to install the global positioning system (GPS) in the pink auto rickshaws to keep tabs on their location as well. “This will definitely provide a safe travel experience to all the women commuters, be it college-goers or working professionals,” says Satyabrata Bhoi, Deputy Commissioner of Police.

Women commuters as well as gender activists have welcomed the introduction of this service. Says Rukmini Panda, a city-based rights activist, “The recent Uber taxi rape incident in Delhi has definitely renewed a deep sense of fear among women commuters across the country. I think many such situations can be averted if authorities take the time to track the past record of those who are part of the transportation system and sensitise them towards issues like violence against women. In Bhubaneswar, before launching the pink autos for women commuters they did put the drivers through a psychological test, which is really necessary. Besides this, we should consider holding monthly orientation meetings with the auto drivers regarding gender sensitivity and talk to them about gender violence. Regular interaction will help them to change their mindset towards women commuters.”

“Though late in the day, government has launched a service that provides a reasonably safer alternative to women. This service should extend to other cities like Cuttack and Rourkela as well, where female commuters chiefly depend on public transport for their mobility. And maybe it would be a good idea to have women drivers riding these pink autos.”

On their part, the auto drivers association is happy to be on board although they firmly feel that the service will flourish only if it is financially viable for the drivers, too. Says Pradip Kumar Samal, Secretary of the Bhubaneswar Auto Rickshaw Mahasangh. “Though the pink autos will stand in key locations, such as the railway station, bus stands, educational institutions and shopping malls, we are apprehensive on whether there will be enough women passengers for us to ferry around. It is almost impossible to sustain livelihood by only ferrying women passengers. Whereas we do give preference to women, in their absence we do take men commuters on board.”

For Sandhya Mohanty, her daily commute to the office is not as scary as it used to be. Says she,

“I do believe that taking the psychological test of the auto drivers has made a difference. I find the pink auto drivers more supportive towards commuters. They don’t argue, pick a fight or use bad language. This should be replicated in other growing cities and towns of the state.”

Adds Monalisa Parida, who works with a private company and has to often work late, “It is definitely a welcome step, but the authorities should ensure that these kiosks provide service on time. The police should start an awareness campaign to promote pink auto service in the city.”

Countrywide, the search is on for safe modes of transport that can give women the freedom to move around their own city without the fear of being violated. Are pink autos the answer?