Weddings to Funerals, Meet the 72-YO Pune Priestess Smashing Stereotypes Since 1997 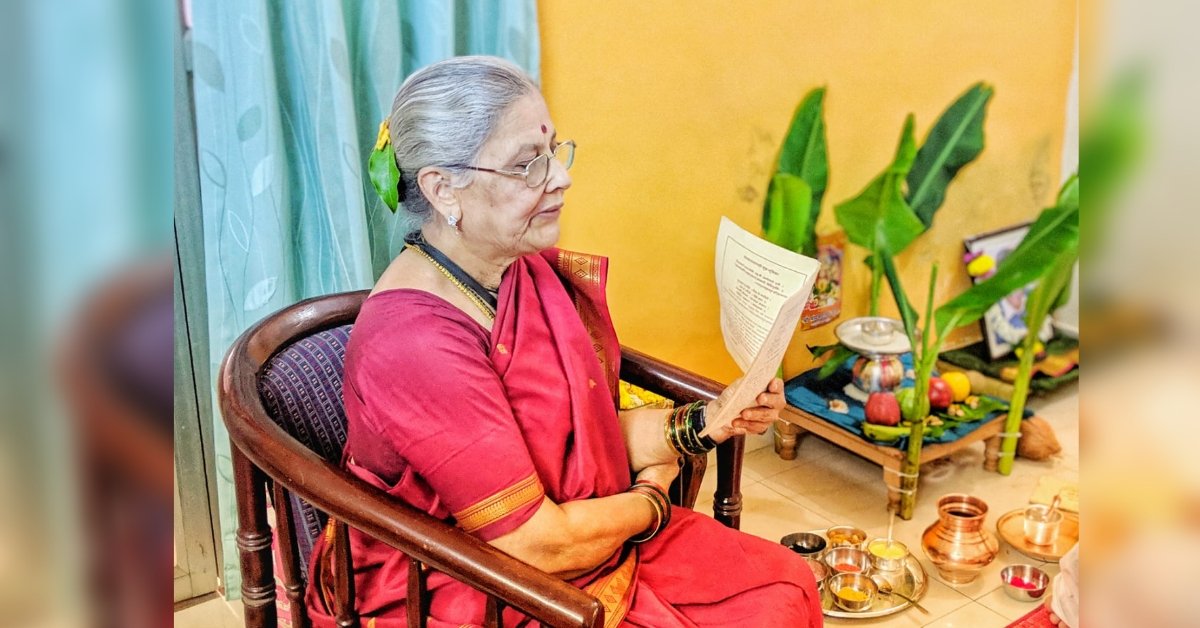 Ensuring that daughters, mothers & widows get equal rights as their male counterparts while performing the last rites of a loved one, Chitra Chandrachud is truly a breath of fresh air.

With a bag full of scriptures hanging from her shoulder, a flower tucked neatly in her hair bun and a pleasant smile on her face, Chitra Chandrachud enters a house in Pune. She is to perform a puja here, a job not many associate with Indian women. But the smile on her face and her witty quips are enough to know that Chandrachud is well-used to the surprising reactions she gets.

At 72 years, Chandrachud carries an aura of infectious energy. Since 20 years she has been performing pujas, marriages and last rites across India. Her journey started in 1997 when she read a Marathi book called “Gargi Ajun Jeevant Ahe” (Gargi is still alive). The book, with a female protagonist who performs last rites at Varanasi, raises questions about assumptions of women fearing the dead and thus not being allowed near dead bodies.

The plot so inspired Chandrachud that she took up a course with Jnana Prabhodini—an institution based in Pune, to read more about priests and priestesses. The institution works in the fields of education, research, rural development and women empowerment.

Chandrachud wanted to chart out a path for herself in a predominantly male-oriented arena. She wanted to be a priestess and perform all rituals—right from naming ceremonies to the last rites.

“But first, I asked my father-in-law about this. I was married and was 52 years old then. I had certain responsibilities in the house and being a priestess would have taken a lot of my time. All he asked me was if I will be too scared to take the leap at my age. When he and my family saw my convictions they all supported me,” Chandrachud tells The Better India (TBI).

So she began her course at Jnana Prabodhini and became one of the four people associated with them who performed last rites.

Chandrachud is the only woman in the group.

“[Our methods] are a tad different to the traditional ways of performing rituals,” she tells TBI, adding, “Traditionally, priests who perform auspicious rituals, like pujas, are not supposed to perform last rites and vice versa. But I perform everything, right from the naming ceremony to the last rites. We have come miles away from the superstitions!”

You may also like: Casteless & Constitutional: Pune’s Padman Had a Unique Wedding That We Can All Learn From!

When asked about how people react to a woman priest she recalls anecdotes that stem from their disbelief and ignorance. “I went to a house to perform puja once.

The family knew I was from Jnana Prabodhini, but that’s all they knew. When I entered, they asked me if Guruji is going to be late and why he didn’t come with me,” she quips.

“This has happened a couple of times, and I am not surprised because somewhere, the thought of a guruji or a priest always projects the picture of a man. But whenever they ask me this, I introduce myself as the one performing the rituals and always get welcomed by the families,” she smiles.

Chandrachud also sheds light on how, even in the 21st-century, people see women as too weak and incapable of accompanying their dead to the crematorium. Chandrachud aims to change that one ritual at a time pan-India. She ensures that the closest of the kin, a male or a female, is present during the last rites.

She was thrilled to share her recent experience where she conducted a wedding.

“The fathers of both the bride and groom had passed away. In such a case, the widowed mothers traditionally don’t conduct the ceremonies. But if widowers in India can, why not the widows? So, I asked the mothers to sit with their respective child and perform the ceremony—from the beginning to the end! This happened just last week,” she shares.

From Pune to Mumbai and even outside Maharashtra, Chandrachud’s methods of performing rituals are quite well-known. So much so that she was asked to perform puja at actor Vikram Gokhale’s place a few years ago. “And since he saw me conduct the puja, he has been booking an appointment every year! I had been so nervous the first time, but I’m comfortable now,” she says.

Over the last 20 years, Chandrachud has performed about 200 last rites and hundreds of wedding ceremonies. She says she has stopped counting now. She writes down her appointments in a diary, and that’s all the record she has. With her witty remarks, patient explanation and a confident persona, the priestess has been smashing stereotypes for over 20 years. And, she informs, her daughter-in-law, who joined the field just last month, is next in line!