20-YO Farmer’s Jugaad To Help Widowed Mom Wins Him Over 3 Lakh YouTube Followers!

I grew up seeing my mother work really hard. She was all alone. Sometimes when we failed to get labour at the time of harvest, she had to bear heavy losses.

He was still in his mother’s womb when Narayan Lal Dhaker lost his father to a heart attack. His twin elder sisters were just two-years-old. His mother, Sita Devi, managed the 7.5-acre farm owned by his family.

But it wasn’t enough.

“I grew up seeing my mother work really hard. She was all alone. Sometimes when we failed to get labour at the time of harvest, she had to bear heavy losses.This was heartbreaking, but as kids, we were helpless,” says 20-year-old Narayan.

As soon as he hit adolescence, he started helping his mother on the farm and soon took charge of it.
“I would often think of methods to make my mother’s work easier and so I would keep experimenting,” he says.
A BA final year student, he opted to study part-time after class 10 so that he had more time at the farm. He would often think of ways to reduce farm efforts and increase yields. He came up with his first farm equipment to get rid of blue bulls (Nilgai), which he calls a ‘jugaad‘.
He says, “My mother had to stay on the farm in the night to keep Nilgai away. I thought of this jugaad, which could keep it away even when no one was at the farm.”

It was pretty simple and cost almost nothing. All he had to do was take an oil can, cut its sides, fill it with some water and light a candle or diya in it. The can was then placed in the middle of the farm, at a height where the light could be seen from far.
“Everyone knows that Nilgai is scared of light. The candle-light would keep it away. Also, the insects that come to feed on the farm would get attracted towards the light and fall into the water in the can. The birds which come in the morning to feed on the farm would instead feed on the insects,” he explains.
The hack was successful, and Narayan was motivated to make more such easy and cheap farm equipment. He soon made a hand-weeder with Rs 200.

With time, Narayan also discovered farming techniques that would increase yield and profit. 1. Mixed-crop technique
While most farmers in his village sow one crop at a time, Narayan prefers to grow two or more crops together.
“If you keep growing the same crops, the soil loses its fertility, whereas a multi-cropping technique helps retain its fertility and increased yield too,” he shares.
2. Growing cotton and sweet potato together:
Cotton is grown on beds with gaps. Narayan prefers growing sweet potato in that gap, which helps control weeds.
“Sweet potato plants are vines which overlap with the weeds. They don’t affect the cotton plants nor do you have to hire more labourers to get rid of them. Thus, there is a double crop, double profit and money saving,” he smiles.
3. Moong to provide nitrogen to the soil
Narayan recommends growing moong (green gram or mung bean) just after cotton to retain the nitrogen content of the soil.
“Rather than putting chemicals into the soil, I prefer these desi techniques,” he says.
4. Trimming chickpea plants
3G cutting or trimming the upper branches of chickpea plants helps get more branches and hence, more produce, he observes.
5. Organic farming with indigenous fertilisers
Narayan prefers making fertilisers at his farm.

“Chemicals can only harm your health and the soil. So the best way is to go organic. Yes, I won’t deny that at times, even plants need chemicals just like our body needs medicines. But this should not be a regular practice.”

As Narayan gets these ideas from social media, he thought of sharing his learnings and innovations with others through the same medium. 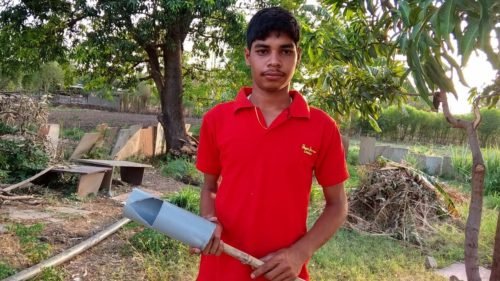 Making farmers aware of their rights
Narayan understood that most farmers do not get many benefits due to lack of awareness. He used his channel to spread awareness about the many schemes and benefits like loans and subsidies provided by the government.
Some of his videos have more than a million views, and he also earns Rs 30,000-40,000 per year through them. But he believes that this money belongs to the farmers. And so, he uses it to innovate more farm equipment that can benefit the farming community.
About his future, Narayan says that he wants to study further but would like to remain a farmer and work for farmers. He earns Rs 4-5 lakh per year from farming and feels that it should be treated as a career option by educated youths too.
Through commitment, he has managed to educate himself and earn enough to get his sisters married last year. His mother visits the farm once in a while and feels proud when someone asks him for farming tips.

It’s surprising that this YouTuber-farmer does not own any electronics like a laptop, camera or video making tools. He shoots and edits all his videos on his phone, making the best use of what he has. “I feel that I could do much better if someone helped me with technology. I hope someone reads your article and helps me with that. We can do wonders if farming and technology come together!” he exclaims.