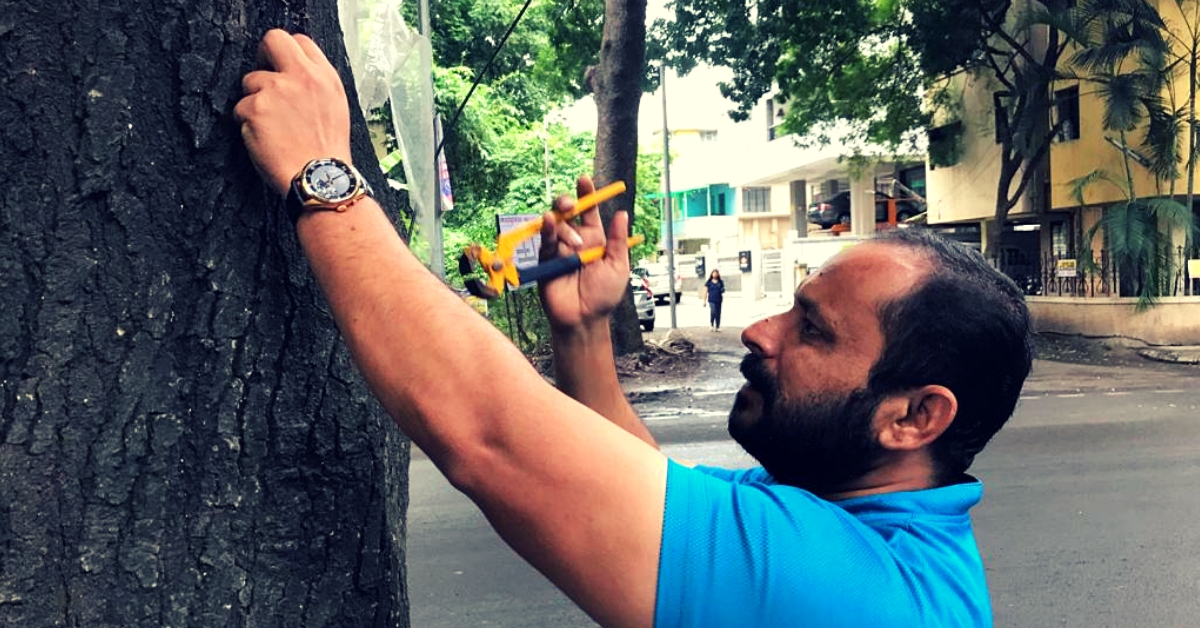 He started observing trees around him. And the more he did that, the more he realised how decade old trees around the area had either been chopped down or had become mediums of advertising.

“We killed them, Baba six-year-old Hirkani wailed to her father, Madhav, as they stood on their terrace.

“We killed the plants,” she repeated.

Madhav and his family had just returned home after a 10-day trip to Kolkata.

Before leaving they had made special arrangements with water bottles to ensure that the plants were watered daily. But in the last minute rush, they forgot to open the covers.

By the time they had returned, the plants had dried up.

This was four years ago. While most of us might find the child’s emotional response charming, it drove her father, Madhav Patil to work in a different direction.

He started observing trees around him. And the more he did that, the more he realised how decade old trees around the area had either been chopped down or had become mediums of advertising.

How so, you may ask.

Have you noticed the banners, flex boards and posters that are hammered into tree trunks using rusted iron nails?

“Every time I saw this, I would remember my daughter’s words. She was only a child but thought of plants and trees as living beings who ‘felt’ more than we ever did. I had to do something.”

And so, four years ago, as everyone around him was celebrating Holi, he walked through his neighbourhood, identified trees with banners and advertisements nailed into them and started the process of making them nail-free.

This simple move of removing nails from trees sparked a revolution across five states in India.

Today, the ‘Nail Free Trees’ campaign has over 500 volunteers spread across 20 districts in Maharashtra and in states like Bihar, Tamil Nadu, Gujarat, and Rajasthan, and has helped free more than 6,000 trees from 50,000 nails.

The Better India got in touch with Madhav to know more about his journey.

“At first, passersby would stare at me suspiciously thinking what is this man with some equipment even doing near the tree? It did bother me at first, but I decided to focus on the task at hand. As days passed, I slowly and steadily, interacted with my friends from Bath Pill, an organisation that we run. Known as angolichigoli in Marathi, the organisation works for several social causes—one of the primary ones is encouraging people to skip taking a bath once a week to help save water, as the state grapples with drought.”

Moved by the concept of making trees nail-free, the members extended their full support. For the next three months, they dedicatedly met once a week for two hours and pinched out nails from trees in the surrounding areas.

When the story of this initiative made it to the local media, several people from different cities and states started getting in touch with Madhav.

“We want to replicate this in our cities too,” they would say.

From a tour operator in Ahmedabad to a professor in Udaipur, to an engineering student in Chennai, to activists in Delhi, and even a vibrant bunch of senior citizens in the neighbouring Pimpri-Chinchwad area, Madhav’s call to rescue these trees found foot soldiers everywhere.

The bunch of enthusiastic senior citizens in Pimpri-Chinchwad was first among these groups to get in touch. Mr Panse, one of its members, declared that once the city became the first one in India with nail-free trees, they would invite the Prime Minister for a visit.

I asked Madhav if the group relied on the authorities for help, and he explained,

“We did think about involving the civic body in Pune to seek permission to carry out the initiative, but realised that would be time-consuming. Besides, our research about existing laws helped us learn about the Maharashtra (urban areas) Protection and Preservation of Trees Act, 1975 and Maharashtra Defacement Act 1995. Both of these clearly stated that illegal felling of trees and defacement of any place open in public view was punishable under law. So we decided to do it voluntarily as a people’s moment without any government help.”

The Maharashtra (urban areas) Protection and Preservation of Trees Act, 1975 states this:

“Whoever fells any tree or causes any tree to be felled without reasonable excuse fails to comply with any order issued or condition imposed shall, on conviction, be punished with the fine of not less than one thousand rupees which may extend up to five thousand rupees for every offence and also with imprisonment for a term of not less than one week, which may extend up to one year.”

Similarly, this is what the Maharashtra Defacement Act 1995, states:

Soon, a host of NGOs, corporators, and youth jumped the bandwagon. The steady progress at Pimpri-Chinchwad also compelled its Municipal Corporation to pass a resolution, according to which, inserting nails into trees became a punishable offence in the city.

In addition to carrying out the voluntary service, Madhav adds how teams spread across different cities and states also carry out awareness and sensitisation sessions in schools, colleges, and IT industries.

You May Also Like: This Roadside Mechanic from Rajasthan Has Rescued Over 1,180 Injured Wild Animals!

But what happens to these nails after they are retrieved from the trees?

“No, they are not discarded,” says Madhav. “Every team preserves the nails they collect. Madhav has his own stored safely in his office. We intend to create an art installation from them and exhibit them at a museum to promote awareness against the practice. We are in talks with Abhinav Kala Vidyalaya in Pune for the same and are likely to execute this by the end of March,” he explains.

Madhav signs off with a message for everyone.

“Trees give us everything. Shelter from rain, shade in the scorching sun, raw material to build homes and even wood for our final rites. The least we can do is respect them. All you need to dedicate is your time and skill, just for two hours a week. Is it too much to ask? I request you to never hammer nails into trees, and if you see someone else doing it or attempting to cut down a tree, raise your voice against it.”

Now as Madhav walks through the streets of the Pune more motivated than ever, a tiny helper walks hand-in-hand with him.

While her father couldn’t save her plants four years ago, we are sure that Hirkani is proud of how he has rescued a thousand others!