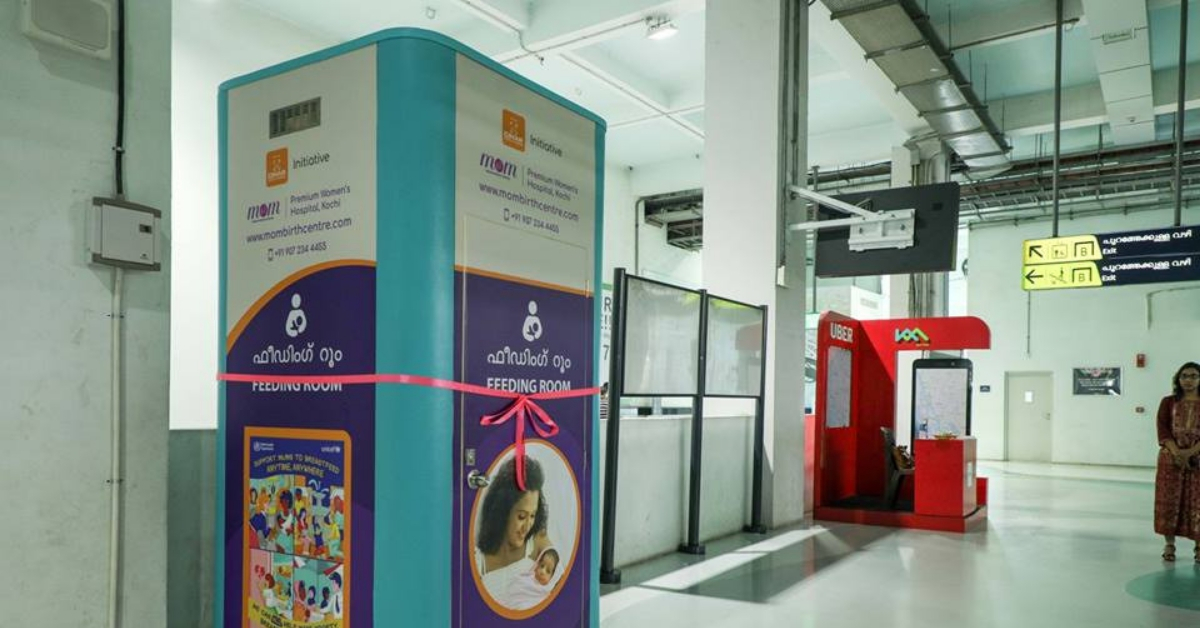 Keeping up with the trend of social inclusion and positivity, the authorities have now installed breastfeeding booths at various Kochi stations!

The Kochi Metro Rail Limited (KMRL) was in the news over a year ago, when the authorities hired 23 people from the transgender community in housekeeping as well as ticket counter jobs.

Keeping up with the trend of social inclusion and positivity, the authorities have now installed breastfeeding booths at various Kochi stations!

Here is a look at five such impressive features that sets the Kochi Metro apart from other Metros:

A nursing mother does not always get a comfortable, convenient place to feed her baby. Breastfeeding in public is a taboo in India and in the time of need, the poor mother is either compelled to sit with a cloth wrapped around her or wait for the security of her home to feed her child. Read here one such account of a regressive Kolkata mall authority who tried to shame a feeding mother, but got schooled by social media instead.

The Kochi metro, in its bid, to help feeding-mothers out of this dilemma, has installed breastfeeding pods at four of its stations. These pods will not just help the passengers, but also the employees.

“The message that we are trying to send is simple: create safer and more sanitary spaces for the women in our society. This has been done considering how difficult it is for mothers to breastfeed their babies in public. After we launch [the pods] in the first four stations, we will take feedback and then think about expanding it to other stations across the network,” APM Mohammed Hanish, the Managing Director of KMRL told the Indian Express.

A wellness start-up named “I love 9 months” has designed these pods. Costing Rs. 1.5 lakh, each pod is a 4 ft X 4 ft, fibre-reinforced plastic cubicle with comfortable seating for the mothers. Each cubicle is equipped with a fan, hand-sanitizer, adequate lighting and even a charging point. Mothers will also be able to contact the support team from “I love 9 months” by phone in case they face any issues or for feedback.

Ganga Raj, one of the co-founders of the start-up told the publication, “The most challenging part for nursing mothers is to feed in a public space. When they’re travelling, it’s all the more difficult. So, this pod is a safe, private space for a mother to breastfeed her baby. Just before boarding, she has the option to breastfeed her baby and then get into the train. We’re trying to make travelling easier for both mothers and babies.”

In May 2017, the KMRL hired 23 people from the transgender community at various posts across their station network. Depending upon the educational qualifications and test performances, the applicants were offered jobs in the housekeeping department as well as at the ticketing counters. Elias George, the then managing director of KMRL told The Hindu, “The metro agency is the first government-owned company in India to appoint them formally. I hope other firms in Kerala give them a fair opportunity to work. Society’s mindset will change only by direct interaction with them.”

But just recruiting people, who identify as transgenders, was not enough, as the KMRL soon discovered. Some of them found it too expensive and difficult to shift in the big city while others faced unwelcome situations at their workplace. But instead of giving up, the metro authorities stepped up their game and devised a plan to include even more transgender people in their workforce, this time, taking care of their overall well-being. You can read the details about it here.

In a male-dominated work-space, the Kochi metro brought a welcome change by recruiting seven women in their 39-member team of loco-pilots. To be appointed, the female graduate applicants had to go through an online as well as a practical test. Additionally, in 2017, KMRL recorded that an astonishing 80 per cent of their staff is female.

You may also like: Mumbai to Get Japan-Like Skywalks That’ll Connect Metro Stations to Malls, Offices!

Speaking to the Times of India, Vandana VS, one of the recruited loco-pilots said, “After completing B. Tech, I was searching for a job. It was then that I came across this job opportunity at KMRL. Initially, an online test was conducted, which was followed by a psychometric test. Then, there was a medical test. Candidates were selected based on their performance in these tests.”

From housekeeping to locomotive piloting, women are, indeed, the driving force behind the Kochi Metro!

4. Meals on wheels the green way!

In 2018, the KMRL decided to go green while providing meals to their staff. While doorstep delivery has boosted the use of plastic in the food packaging industry, the Kochi metro is using steel tiffin carriers. Staff members can place meal orders at Rs 40 and food will be served to them in steel containers which are more eco-friendly than plastic ones.

Another effort in the pipeline for the KMRL is to decorate 200 pillars of the metro line with vertical gardens with 3000 tonnes of compost used from the municipal waste. While every sixth pillar is set to go green, the others will be used to earn revenue through advertisement.

You may also like: In a First, You Can Now Rent a Self-Drive e-Car from Metro Station at Just ₹ 40/Hour!

Along with this, the metro has plans to use solar energy to power 25 per cent of its electricity needs. The panels, installed atop stations and metro coaches are set to make the metro more eco-friendly.

From breastfeeding pods to giving decent jobs to transgender persons and using green energy to power its needs, the KMRL is leading the way and setting an example for others to catch up!