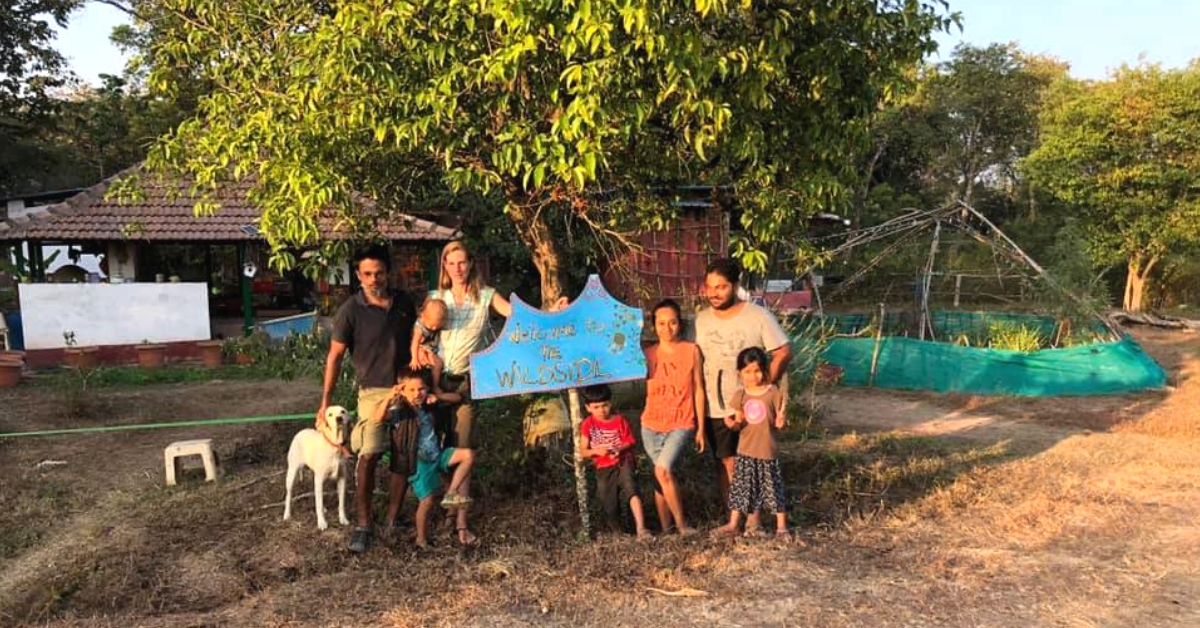 Initially, the family would take weekend trips to Sakleshpur, the quaint hill station in Karnataka known for its plantations and coffee, and live in tents inside the jungle.

From planting a medicinal forest and digging up a mud pool to building earthbag structures at their farm and forest parenting, there is perhaps nothing that Venetia and Gautam Kotamraju haven’t attempted.

In a conversation with The Better India, Venetia recalls the beginning of this journey.

“It was when I was pregnant with our first son, Utpalaksh, that Gautam and I became conscious about the unhealthy environment he would grow up in. We were jaded with the city life and decided to make a break for it,” begins Venetia.

Initially, the family would take weekend trips to Sakleshpur, the quaint hill station in Karnataka known for its plantations and coffee, and live in tents inside the jungle.

However, over a period of time, they realised that this could be a permanent way of life for them.

“Our tryst with minimal living made us understand that most things we believe are necessary to live can be done without,” says Venetia.

The couple eventually purchased a patch of land in Sakleshpur, and the weekend trips graduated to a life with bare essentials.

While Gautam would head to Sakleshpur on weekends from Bengaluru because of his job, Venetia and their sons embraced this minimalist lifestyle with open arms.

Starting with just a tent, some sleeping linen and water a few years ago, their lifestyle at the farm, which they named ‘The Wild Side,’ slowly began to include simple yet vital sustainable practices.

“We realised that we would need to make a few changes. A bathroom that doesn’t pollute, a place to shower in, a minimal arrangement for cooking and a sink to wash clothes—this is what we had in mind. That’s how we built the compost toilet and a woodfire stove. People who visited our farm also provided us with invaluable suggestions about how we could become even more sustainable. So, it is a constant process,” explains Venetia.

Today, if you visit the farm, you will find a vegetable garden, a mud pool as well as old shipping containers being used for storage. Venetia shares that they don’t hire farm hands for any of the work. It is mostly handled by them, and once in a while, some volunteers drop in to lend a hand.

Even their son Utpalaksh, a five-and-a-half-year-old, actively helps out with the work, while little Theos, who just turned one recently, is growing up attuned to this way of life.

Among the best example of their sustainable practices on the farm are the basic mud buildings that are made using earthbags.

“The only tweaking that we have done here is making running water available for us through a tap and a solar water heater to handle the laundry needs of the baby. Recently, another family moved in with us. Their two children, along with ours, have brought in an incredible amount of activity and noise at the farm,” laughs Venetia.

Except for occasional breaks to Venetia’s home in England and Gautam’s place in Bengaluru once in a year, the family stays put at the farm.

Venetia reaffirms that having broken free from the trappings of urban life, returning to the city will never quite again bring them the joy that their sylvan lifestyle does.

You may also like: How One Amazing Lady Transformed Barren Land Into a Lush Farm Singlehandedly

You can follow their life and experiences at The Wild Side in Venetia’s own words on her blog, ‘Svarga on Earth’ here.