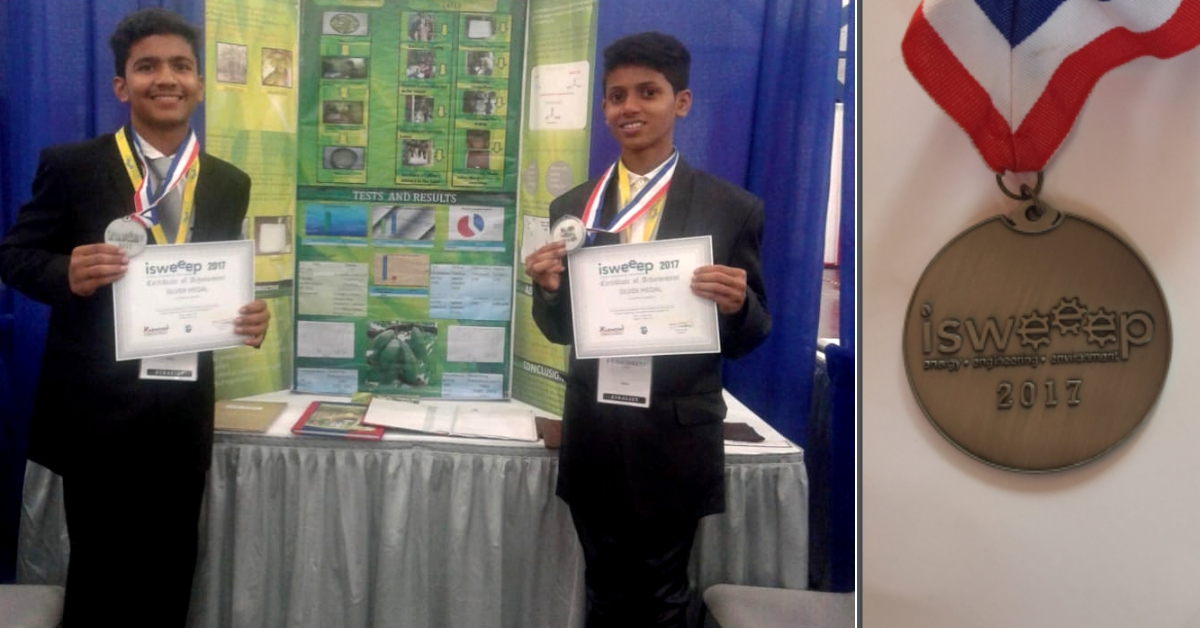 It all started in 2016 when as students of Indraprastha Vidyalaya, Aman and Nachiketh presented a project at the regional competition of the Indian Science and Engineering Fair.

What happens when a family’s secret becomes the basis of a science project?

Fortunately for two Mangaluru teens, Aman KA, and A U Nachiketh, it received the silver medal at one of the world’s largest science fairs.

It all started in 2016 when as students of Indraprastha Vidyalaya, Aman and Nachiketh presented a project at the regional competition of the Indian Science and Engineering Fair. It was organised by the Science Society of India.

There was hardly a month left for the competition when their idea of developing a preservative from the green fruit bimbli (scientific name: Avaherro Bilimbi) failed. When they sent the vinegar they developed from the fruit to Yenepoya Laboratory, it was found unsuitable for consumption due to its acetic acid content.

It was disappointing. But the boys had to find a way.

The deadline was ten days away, and they had no concept or product to showcase. It was at this time that Aman’s mother, Rehmat Begum, came to their aid.

She recalled how the humble fruit had helped her father (Aman’s grandfather).

Aman’s family had been in the rubber business for close to 40 years. When his maternal grandfather, Ibrahim, realised that they did not have enough formic acid, a vital ingredient in the coagulation of rubber latex to make sheets, he kept looking for alternatives. Until he came across the bimbli extract.

Aman and Nachiketh considered Rehmat Begum’s suggestion and started their experiments in that direction.

The boys took the fruit, ground it and extracted its juice. Then, they took a one-litre tray of rubber latex and added 60 ml of the juice to it.

The results showed that bimbli sped the process of coagulating rubber latex by ten hours. While it usually takes formic acid close to 16 hours for the process, it took the fruit extract only six hours!

Aman adds how apart from cutting down the time by ten hours, a quality analysis of the rubber sheets also showed that they were of superior quality as against the regular sheets manufactured using formic acid.

Speaking to The Better India, Nachiketh says, “Apart from formic acid, farmers also use para-nitrophenol to give the rubber sheets their gold and yellow colour. Because these rubber sheets, once produced by the farmers, are graded by a board based on their colour, which then supplies it to the rubber product manufacturing factories. Bimbli eliminates the use of any of these chemicals and forms a natural coagulant. Thereby cutting down the cost of production of rubber sheets, while also giving the farmers a quality product for additional income.”

When the boys produced 15 such sheets and took them to the board for grading, their product was graded A+.

Besides, the rubber sheets prepared using bimbli are harder and stronger than their chemical counterparts.

Aman adds, “Generally after the coagulation process is over and the rubber sheets are formed, the trays are left behind with a residual solution. This residue of formic acid is often disposed of by farmers into the soil. Since the solution is very acidic, it depletes the soil and makes it unsuitable for agriculture in the long run.”

On the other hand, Nachiketh adds that the residue from the bimbli extract after the coagulation process is not acidic and poses no threat to the soil.

While a litre of formic acid costs up to Rs 325, the farmers spend another Rs 300 for para-nitrophenol (used to give the sheets colour). Naturally grown bimbli cuts down these costs completely while making the entire process of rubber sheet production eco-friendly. The same process that requires 100 ml of formic acid can be executed with merely 60 ml of non-toxic bimbli extract.

Their project won a gold medal at the regional-level Indian Science and Engineering Fair.

They moved to represent it in more detail at the national competition held in Rajkot, Gujarat, where yet again, they clinched a gold medal.

While they competed on their home ground with close to 50 teams at the regionals and nationals, they were pitted against 150 teams from 68 countries at ISWEEEP (International Sustainable World Energy Environment Engineering Project Olympiad). This was hosted by Harmony Public Schools in Houston, Texas, USA, from May 3-8, 2017.

The competition was fierce, with other participants exhibiting projects on topics like brain mapping and nanotechnology following years of research.

The boys were also trained in Mumbai by experts at the Homi Bhabha Centre for Science Education.

When asked about the questions asked during the presentation, Aman says, “We started out by introducing ourselves and the project. Almost every judge asked us about the side effects of using formic acid and what makes the bimbli extract a better alternative. The guidance by the experts and mentors helped us display our project in a visually-appealing manner and tackle questions like these smoothly.”

It was an honourable moment for India as the two boys and the humble bimbli took centre stage at the competition and clinched the silver medal.

“It was surreal. We weren’t expecting it. It was a moment of pride for both of us to represent India at the competition,” says Nachiketh.

Aman agrees with the sentiment saying, “I felt very proud. And the best part was that I got an opportunity to visit the NASA space centre in Houston.”

You May Also Like: Best From Waste: How Tamil Nadu Schoolkids Used Innovation to Help Their Aged Sweeper!

At the 70th Republic Day celebrations, Nachiketh was presented with the Bal Shakti Puraskar Award in the field of innovation by President Ramnath Kovind.

Also, PM Modi tweeted, “A U Nachiketh Kumar prepared standard rubber sheets from a fruit named Bilimbi (Averrhoa bilimbi) as a sustainable and environment-friendly substitute for rubber latex created from formic acid by farmers. Best wishes to him for his future endeavours.”

While it is indeed a joyous moment for the student, it is unfortunate that his teammate Aman was left out in the mentions since it was a joint effort. It is of course in the nature of things that sometimes credit does not reach where it is due.

The awards are given out based on the overall achievement and not one single project. Nachiketh’s achievements include developing an ointment for curing itchy boils and pus cells. He had also won a bronze medal at the district level INGI-CONNECT science project competition for a working model of conversion of energy.

“When the Bharat Puruskar was declared, the excerpt that is read out for the winners only highlighted the bimbli project. And that’s how even social media picked on it,” says Nachiketh.

While both boys are currently preparing for their PUC exams, they aim to develop the product further.

After the exams, Aman hopes to write to the PM about his contribution to the bimbli project. We hope it reaches the right ears and he receives the credit due to him.