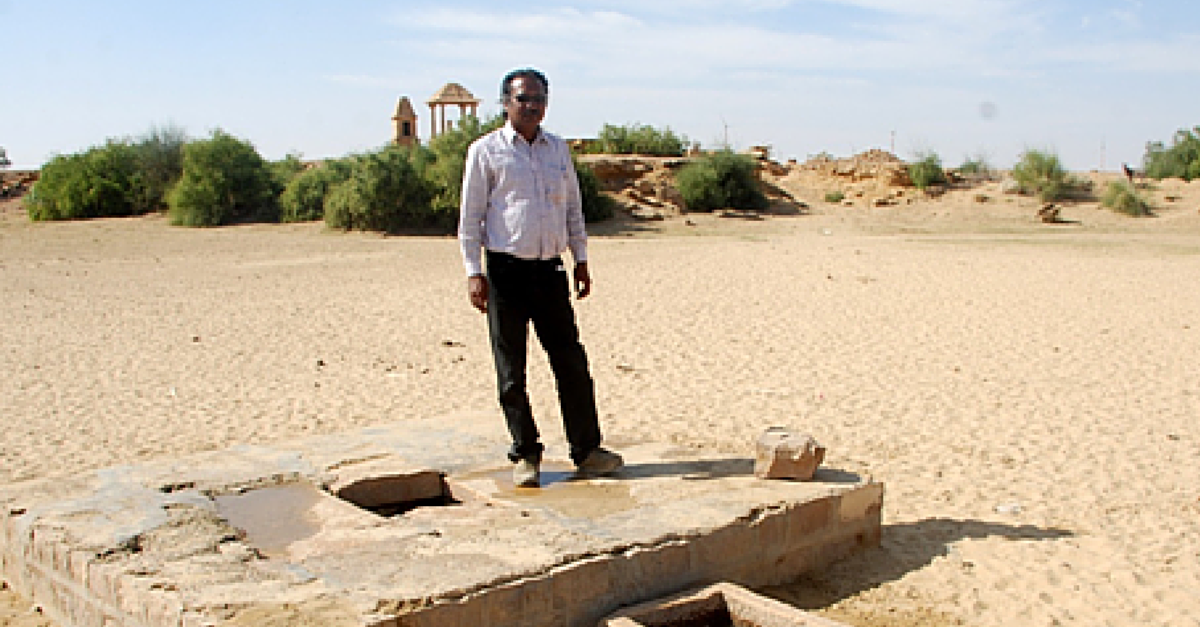 Jethu Singh Bhati uses traditional methods of rain harvesting, practices agriculture without irrigation, and recycles waste. His dedicated efforts are not only helping meet the needs of a parched Rajasthan, but are making the state environment-friendly as well.

No matter how much technology advances, sometimes the best solutions lie in the past. Jethu Singh Bhati, a committed environmentalist, has been exploring traditional practices to meet the water needs of one of the driest regions in the country.

Sparse monsoon rains in Jaisalmer, Rajasthan, do not make news anymore. The region witnesses India’s lowest average annual rainfall (250 mm in a year). It also has a high human and cattle density as compared to other desert areas in the country. Hence, securing whatever minimal water the region receives is the only way of survival.

Bhati had been using traditional rainwater harvesting methods for some time and had successfully revived various ponds in several villages in the area. However, a lot more remained to be done, he felt.

In order to expand the use of his practices and engage more people, Bhati started an NGO, Thar Integrated Social Development Society (TISDS), in 1991. From using traditional rainwater harvesting techniques, to using the Khadin system of agriculture, to recycling waste, this NGO is covering a lot of ground.

Bhati has been extensively working on the paar system of rainwater harvesting. He took monetary help from the Centre for Science and Environment and purchased non-farming land from a panchayat on a five-year lease in 2003.

Around six to ten beris are constructed in an average paar. “But it depends on the size of the catchment area. At some places there are around 20 beris,” says Bhati.

The part of the agar that has high moisture content is used to grow fodder for animals and some endangered plant species. With the help of this technique, the villagers now have a perennial source of water. Women, who earlier had to travel several kilometres to get water, can now access the water close by.

The construction of these catchment areas has created employment opportunities for the villagers. Also, people from nearby villages have started to approach TISDS to replicate similar models in their regions.

“After the successful implementation of this technology, the government has asked (through the MNREGA scheme) that people use only traditional rainwater harvesting systems for agriculture in many villages here,” Bhati says.

Dry regions mostly depend upon irrigation facilities to maintain crops. But Bhati has been advocating the traditional Khadin system for agriculture, which doesn’t require any irrigation facilities, tubes and pumps. The water needs of the crops are taken care of by collected rainwater.

This system of rainwater harvesting is designed to harvest surface runoff water for agriculture. The traditional method has been used by many villagers since the 15th century and Bhati is trying to revive it in the desert.

The water received from the monsoon in July and August is stored and used for crops from October to March. “The harvest is really good with this method. I sowed around 5 kgs of gram seeds and received a harvest of 40 kgs,” Bhati says.

He also advises local farmers not to be too ambitious and always keep in mind that the area they live in is very dry.

“I ask them to not compare themselves to the farmers of other states like Karnataka or Punjab. The water conditions are different there. Here we don’t have enough water and we have to make sure than we don’t use chemicals and other harmful techniques to increase our yield,” he says.

Bhati doesn’t focus just on farming. TISDS has a plastic recycling facility, which the NGO uses to keep the desert clean. “We collect the plastic from nearby places and recycle it into small balls and then sell it to other factories,” he says.

With financial help from the Barefoot College, TISDS has been able to sustain itself through thick and thin. Bhati plans to use his rainwater harvesting and irrigation-free agriculture techniques in other villages of the state in the future.