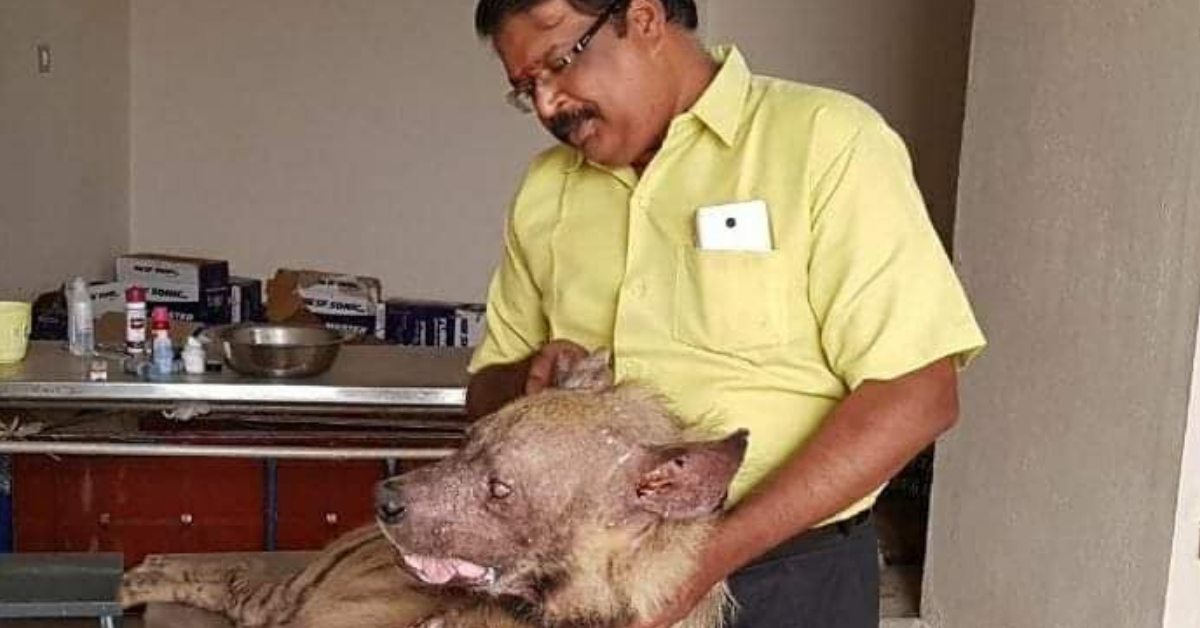 The complete credit for this near impossible transformation goes to Dr Asokan and his dedicated team comprising nurse Balamani, livestock inspector Senthil Kumar and his assistant Marimuthu, Ganesh, a biologist, and his assistant Kesavan.

In recent years, we have read about several instances where wild animals met a brutal end after straying into a human settlement.

A similar incident occurred in October 2017, when a striped hyena strayed into the village of Bijil Kuttai, near Bhavanisagar in the Erode district of Tamil Nadu.

Once the villagers discovered the whereabouts of the animal, they ambushed and mercilessly thrashed it, till they believed it was dead.

However, the hyena was meant to live.

Spotted by the field staff of the Sathyamangalam Tiger Reserve (STR) near Sigil Kuttai almost a week later, the poor animal was unconscious, and the extensive injuries on its body seemed to imply that no intervention could save it from its impending fate.

Nevertheless, the concerned officials decided to alert Dr K Asokan, who was the forest veterinary surgeon at STR. Even though the hyena was in a critical condition, the doctor was not willing to give up on the animal—especially because it is a ‘near-threatened’ species.

Jumping to action, Dr Asokan transported the animal to the STR’s forest veterinary unit (FVU) at Karachikorai that very evening.

Upon close inspection, he found that the hyena had a slew of complications—massive head injury, dislocated shoulder joint, missing canine teeth, damaged cornea, swollen forehead and neck, as well as a maggot infestation in the right ear. In addition to that, both its eyes had corneal ulcers.

The team at STR even conducted an X-ray and MRI scan and found that it had suffered multiple fractures all over its body, including the ribs, the eleventh thoracic vertebra (T11), the inner body as well as the left shoulder.

In addition to all this, it was also discovered that the hyena had Vestibular disease, which made its head tilt and circle in only one direction.

Fortunately, the orthopaedic surgeon found that the shoulder joint dislocation could be treated and conducted reconstructive surgery.

In June 2018, the hyena finally woke up after being in a coma for eight long months.

The complete credit for this near-impossible transformation goes to Dr Asokan and his dedicated team comprising nurse Balamani, livestock inspector Senthil Kumar and his assistant Marimuthu, Ganesh, a biologist, and his assistant Kesavan.

Weighing about 18 kg around the time it was rescued, Asokan shared that the hyena now weighs 42.7 kg.

“We are feeding the animal three litres of milk, 3 kg beef, 3 kg chicken, 10 eggs, bread and multivitamin tonics every day. The hyena might have been attacked when it lost its way and entered the human habitat in search of food and water. If I am right, it’s the first time in the country that an animal is recovering from a coma,” he informed The Times of India.

The 8-year-old hyena is still in a precarious state and Dr Asokan believes that chances of its survival in the wild are quite low. Therefore, the authorities have decided to shelter it at the FVU for the rest of its life.

Dr Asokan adds that striped hyenas are one of the least studied and poorly understood hyena species, and are categorised as “Near Threatened” (NT) by the International Union for Conservation of Nature.

Therefore, he had to go all out to ensure that this one survived. “If I save this male hyena, it could produce at least another five hyenas during its lifetime,” he said.

Although the forest department is funding the rescue and rehabilitative measures, Dr Asokan ends up spending nearly Rs 48,000 every month from his own pocket to buy medicines and food for the animal. Other officials at STR also pitch in at times.

In these times of general apathy against wild animals and the rising cases of abuse and torture, the persistent efforts of Dr Asokan and every official at STR who helped bring back the hyena to life deserve the highest praise possible.

We salute their perseverance and hope that these efforts lead to greater awareness about wildlife conservation.