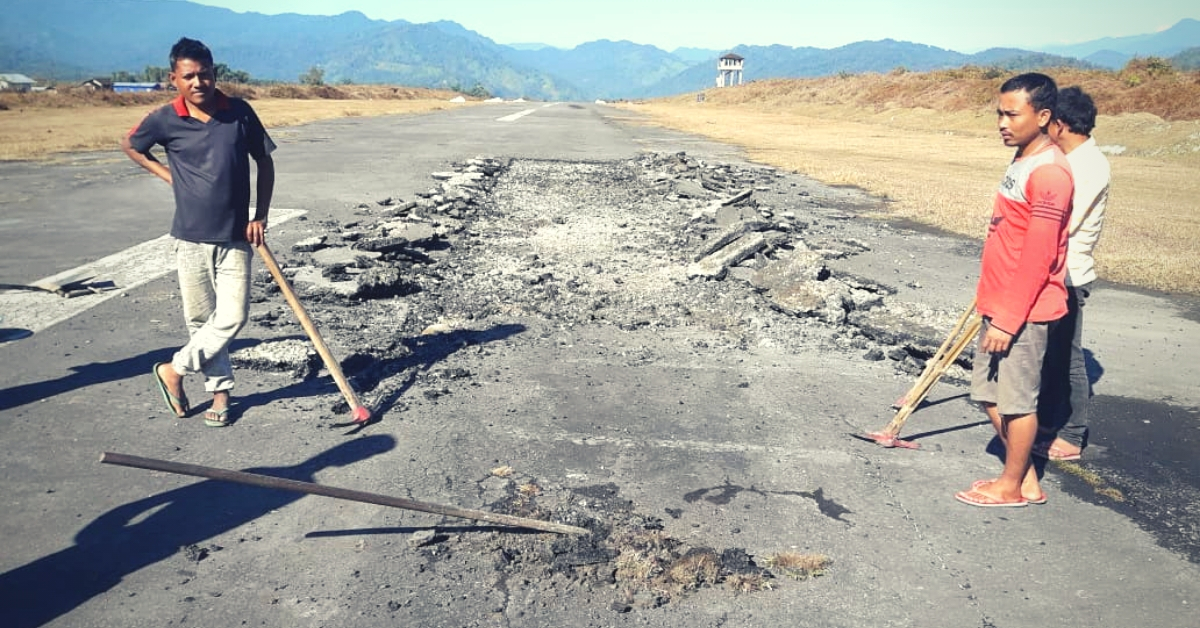 The airstrip is located in a remote corner, with no proper road connecting it to the rest of the state. But that didn’t stop the villagers!

In today’s world, it is a rare sight to see a congregation of people coming together to work towards building a better tomorrow. And, at Arunachal Pradesh’s remotest circle, Vijaynagar, this has happened, quite literally.

In an unprecedented move, residents from 11 neighbouring villages joined hands to offer shramdaan (voluntary labour) to the Indian Air Force (IAF), to repair a damaged airstrip and make the landing ground functional.

The remotest circle of Changlang district in the north-eastern state, the Vijaynagar Advanced Landing Ground (ALG), had been abandoned and lying unutilised for the past three years, due to a damaged airstrip. Because of this, the ALG was rendered unfit for use, for any fixed-wing aircraft, as reported by Arunachal24.

Although talks to begin the repair work of seven such Advanced Landing Grounds (ALG) were concretised in 2018, the lack of access to Vijaynagar made it difficult.

Being one of the remotest areas, Vijaynagar is not connected to any kind of motorable road, and all the construction materials and labour resources had to be transported via air, making it an expensive affair.

On hearing about this roadblock, the villagers of nearby areas volunteered to provide their labour instead, by helping the Air Force authorities with the restoration work.

#MissionVijaynagarALG The work involves cleaning of runway surface on which grass and moss had accumulated due to non utilisation of surface since 2016.This task required huge manpower,where locals come out to help @IAF_MCC to undertake this task.@SpokespersonMoD @easterncomd pic.twitter.com/Btub9XMvVc

Primarily, the work involved clearing off weeds, moss and wild grasses that had been covering the unused surface of the airstrip, an IAF spokesperson told the Indian Express.

“This task required a large number of people as it is manpower-oriented. In a move that is unprecedented, people from 11 villages of the local areas of Vijayanagar volunteered to help air force authorities to undertake this task by carrying out ‘shramdaan’ (volunteer work). The repair work by the specialised team has already commenced, and the material is being transported to the ALG in phases,” he told the publication.

Had visited Vijaynagar in December & appraised @DefenceMinIndia to take up the repair & maintenance work of ALG. Amazed at the electrifying speed at which the ministry has heeded our request. Thanks to our dynamic Defence Minister Smti @nsitharaman ji that the work is now ON. https://t.co/VDAJdb1qQt

Col C Konwer added that the villagers tirelessly worked alongside a specially-trained team, which has begun the repair work. While speaking to the Arunachal Times, he said that the materials are also being airlifted to the spot, in phases.

Their collaborative efforts truly reflect the support of the civilians to the IAF!