From fresh strawberries to Egyptian Lolla Rossa lettuce, the startup has been producing an array of vegetables and fruits in Delhi, Mumbai and Haryana.

‘Necessity is the mother of invention’

This common English proverb found its literal translation in 28-year-old Ullas Samrat’s life when his mother was diagnosed with a lung disorder.

To help her eat and breathe right, Ullas discovered a unique way of farming, without soil.

It was at the same time, in the summer of 2014, that his old friend Dhruv Khanna, called him from Singapore. In the midst of the usual talks of nostalgia and how their lives had been shaped, the duo found common ground–to start something real and impactful.

“I had relocated to Singapore for my masters in 2013, while Ullas was in Delhi, taking his family business forward and running a startup called the Writing Labs. I, too, had a startup making smart TVs, an alternative to Apple TVs. But, we both were not very satisfied with our lives. Ullas’ mother’s condition was deteriorating, and his plans to shift to a farmhouse in the outskirts were cancelled when doctors revealed that it could be more dangerous for her, owing to the high use of pesticides in the soil, water and air. That is what got him interested in Hydroponics (soil-less) farming,” said Dhruv (28), while speaking to The Better India.

“A company called Comcrop was situated near my office in Singapore, and so I used the opportunity to meet them and gather more information. Eventually, it was decided that I would relocate to Delhi, and together, we would figure out a pilot for the same,” Dhruv adds.

Hydroponics or soil-less farming involves growing crops without soil, using only the mineral nutrients in a water solvent. Another simple method used by Triton uses a balanced mixture of cocopeat, perlite and leca (clay) balls, instead of soil. 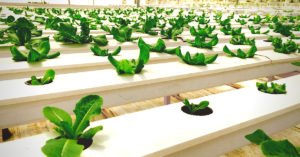 Since 2014, Triton Foodworks has been growing vegetables, fruits and herbs in temperature and humidity-controlled greenhouses spread across 1,50,000 sq ft, by employing hydroponics and vertical farming systems, in an ecologically sustainable way.

Their first farm was set up on a plot in Delhi’s Sainik Farms, on Samrat’s family land. With the expertise of Deepak Kukreja, the company yielded eight tonnes of strawberries, earning them about Rs 3.5 lakh. But their best efforts met with adverse circumstances when the local civic authorities at the Municipal Corporation of Delhi began to question the structure of a greenhouse at the location.

“The area of Sainik Farms was in dispute, and as per the law, no residential space was to be erected there. Essentially, a farming land or any agricultural activity, on the other hand, was absolutely fine. But, the authorities still harassed us. We showed them our legitimacy, and yet they demanded a bribe of Rs 5 lakh. It was impossible for us to do it, so when we refused, they demolished our entire plant without any notice. It was a huge hit at that time, which pushed many of our team members away,” shares Dhruv.

Even as the pieces fell apart, Ullas, Dhruv and Deepak stood steady, trying to overcome it by every possible means.

After months of efforts, they finally re-established their farms and continued with R&D through three research and production facilities, in Wada near Mumbai, Rohini in Delhi and Manesar in Haryana.

By January 2016 until mid-2017, the company managed to bag and execute five big projects in Karnataka, Maharashtra and Delhi, fetching them more than Rs 1 crore in revenue.

You May Also Like: These Organic Farmers Prove Lemons in Life Can Fetch You Lakhs in Profit. Here’s How!

“We eventually turned our failure into our strength, as the incident motivated us to further hydroponics in India,” says Dhruv.

Now an accelerated trend in the country, hydroponics is gaining popularity even with larger companies like Dabur and Mahindra. At a time when the deteriorating quality of soil, water and air due to irresponsible farming techniques is causing the present generation of farmers to migrate to cities for alternative professions, these three have chosen to walk a less-travelled path, only to introduce what they call–the future of farming!