This Engineer Designed Our First National Mixie for His Wife! 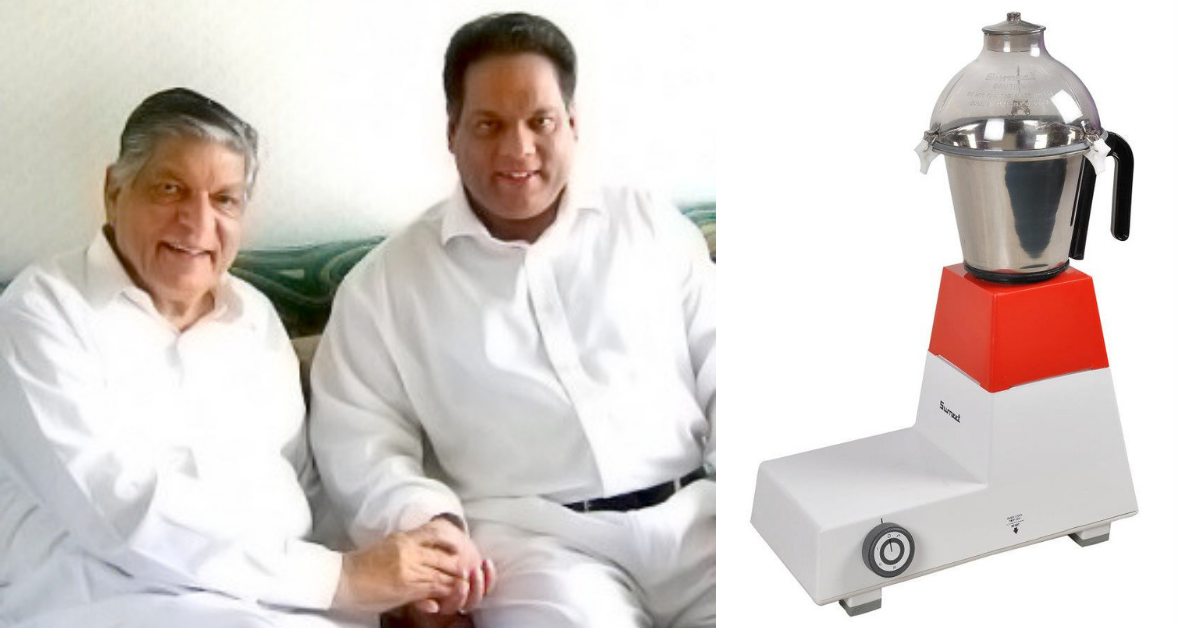 In most Indian kitchens, the mixie plays a prominent role--whatever the cuisine, we need a good mixer-grinder to get all our masalas pounded well.

In this day and age of branding noise, I was surprised by the kind of reaction that one particular brand evoked in my 92-year-old grandmother. That, for me, proved the strength of the iconic mixie brand–Sumeet.

With great enthusiasm, she told me about how she had spent about Rs 1,000 in buying the mixie, how it came with steels jars and not plastic ones, as is the case today.

Even today, the Sumeet mixie sits in her kitchen, used by her every day. Her only complaint is that it is a tad noisier than the newer ones in the market.

Not just that, as part of the trousseau that she gave my aunt and mother–this mixie sat right on top.

56 years ago, this iconic brand was born, not out of extensive market research or any other kind of strategic business evaluation but a bare necessity.

No wonder they say that necessity is the mother of inventions.

In most Indian kitchens, the mixie plays a prominent role–whatever the cuisine, we need a good mixer-grinder to get all our masalas pounded well.

As someone who enjoys cooking, I remember my mother cleaning and taking care of the mixie with utmost care. It was one of her prized possessions, after all, and she hated anyone else meddling with it.

This certainly was one brand whose appeal cut across generations of Indian women.

Contrary to popular belief that Sumeet was a brand born in Southern India, Sumeet was actually developed and designed in Mumbai.

Mrs Madhuri Mathur used the Braun blender from Germany for most of her cooking. While it was efficient, she noticed that it could not break down the spices used in Indian cooking.

On one such day, the motor burnt out, as it could not take the heavy-duty grinding that Indian cooking needs.

Mrs Mathur, unable to find any Braun service centres in India, challenged her husband to repair the machine at the earliest.

Although an engineer, Mr Satya Prakash Mathur was unable to fix the mixie. He, however, took the challenge sportingly and designed a new mixie with a motor powerful enough to withstand the rigours of Indian grinding.

The development of an indie-mixie

Within two years, they had a workable electric motor, and by 1970, they had designed a single jar for dry mixing as well as wet grinding.

For the longest time, it was the only available brand in India. One that became the dream possession of every Indian housewife.

What is also interesting is how Mrs and Mr Mathur worked together to build the brand. They put up collateral for an initial loan amount, and with no designers involved, the conceptualisation and the execution were all taken care of by Mr Mathur.

While Mr Mathur provided the engineering inputs, his better half provided the user’s perspective – and thus was born Sumeet, a word which in Sanskrit, means ‘good friend’.

In one of the many testimonials available online, a loyal user says, “Sumeet was my first mixer in 1974, and it is still there. Over the years, while I have used various different makes and models of brands, the comfort and ease of operation my Sumeet mixie gave me was missing. I am strongly of the opinion that Sumeet is the one and only mixer grinder for Indian kitchens, particularly for south Indian dishes.”

For households across the length and breadth of the country, Sumeet has truly been a good friend.

If you have any memories of using this mixie or the brand, do let us know in the comments.

You May Also Like: Remember the Signature AIR Tune? Meet the Jewish Refugee Who Composed it!
A Reader Shares: I totally agree with everything written about Sumeet mixie. I got one for my wedding in 1979. Later, when it could not be repaired, I went for another Sumeet mixie. And I am still using it!
I tried a couple of other brands over the years as well but packed them up because Sumeet satisfies like no other. Thank you Sumeet mixie! Mind you, I have had to cook a lot and Sumeet has been my assistant! – Neeta Darbari