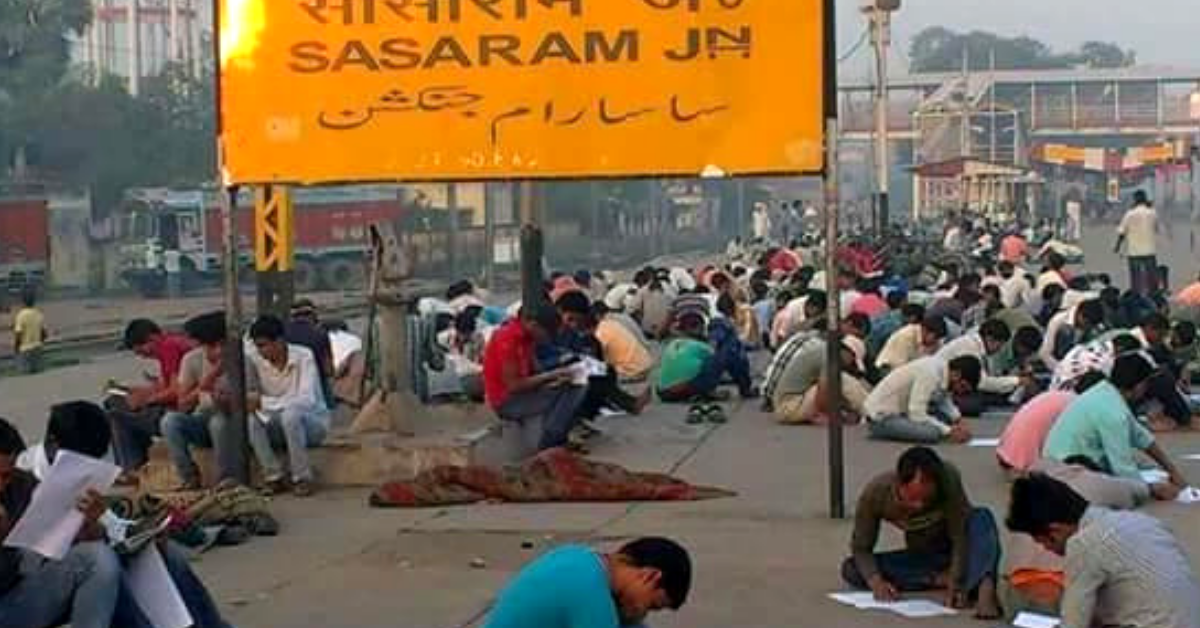 In an attempt to help these students realise their dreams, Patna Superintendent of Rail Police, Jitendra Mishra, played good Samaritan by providing identity cards to over 500 youths. With these cards, they can prepare for various competitive examinations under a lamp post at the railway station.

At first glance, the Sasaram station in Bihar looks like any other. Passengers waiting to board, trains chugging in and out of the platform, copious amounts of tea being made and consumed, and that all too familiar smell that emanates from railway stations in India.

However, in one corner on platforms 1 and 2, you are likely to see groups of young boys who are busy poring over material and having animated conversations.

This is not a one-off scene; this is something that happens each day for two hours, in the morning as well as the evening.

For those two hours, this railway station transforms into a coaching centre for young aspirants preparing to crack various competitive and entrance exams.

In an attempt to help these students realise their dreams, Patna Superintendent of Rail Police, Jitendra Mishra, played good Samaritan by providing identity cards to over 500 youths. With these cards, they can prepare for various competitive examinations under a lamp post at the railway station.

There are multiple study groups at this station; all aspiring to find themselves government jobs after clearing the competitive examinations. The senior students visit the station regularly and coach others who are mostly from economically backward sections of society.

According to a report published by The Telegraph, around 1,200 students assemble on the platform every evening from far-flung areas of Maoist-infested Rohtas.

“There are remote villages, which still don’t have electricity. As a result, students come to the railway station and study under the lamp post,” said Vicky Kumar, a resident.

Santosh, one of the students, has been coming to this “coaching centre” for a few months now. Speaking to The Hindu’s Business Line, he says that he pays a nominal ₹3 for a set of 100 questions.

Apart from questions on current affairs, mathematics, reasoning and language, these students learn all that is required for the exams, including how to face job interviews.

The acute power shortage that the state faces is one of the reasons why students come out in such large numbers to study under the streetlights. The station has provided them with a haven where they can spend hours immersed in their books.

Every paan-wala and tea stall owner in the station knows these boys. They are called the station waale ladke (station boys). There are some students who spend almost entire nights there studying.

What keeps them coming back is their support in each other, the seniors and the uninterrupted power.

With a million dreams and hopes, these young boys throng the stations each day to study; while some make it, many don’t.

The hope, however, continues.

You May Also Like: #UPSCSimplified: 5 Tips on How to Tackle the Exam by IAS Topper Abhisekh Surana