Exclusive: Meet the Man Who Turned His Childhood Heroes into a Full-Time Job! 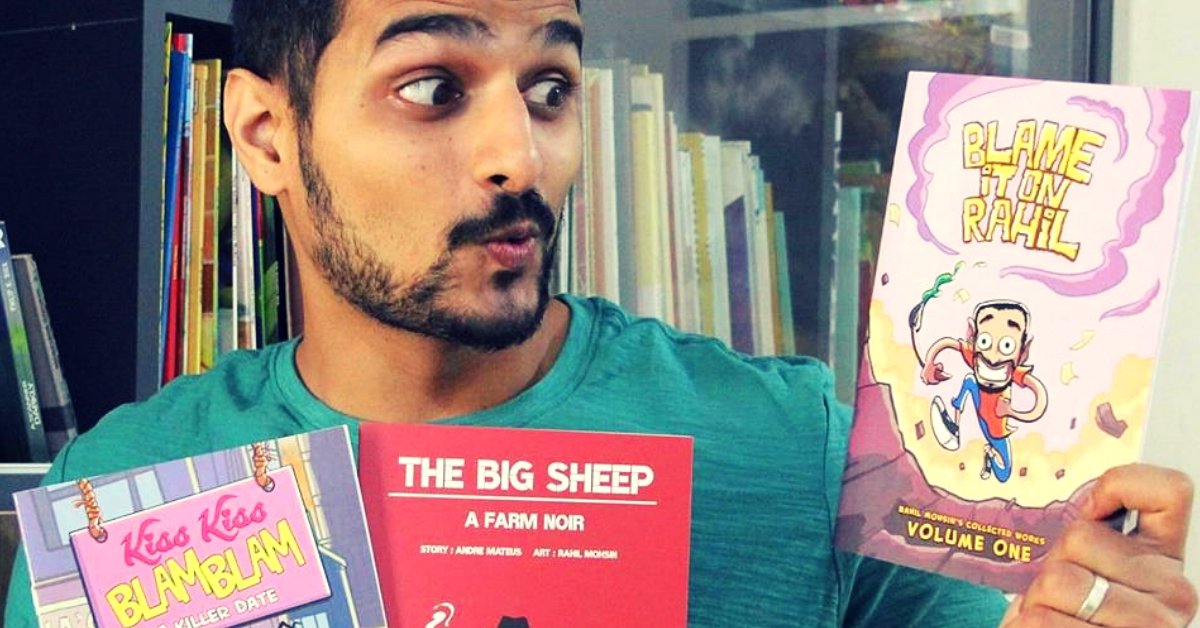 We met a very vivacious Rahil Mohsin during the Bengaluru ComicCon, held in the Garden city recently.

Comic books! Who hasn’t read them while growing up! From Amar Chitra Katha to Asterix, Archies and our favourite Tinkle, these hand illustrated works made our growing years quite enjoyable as we spent many stolen hours reading and getting lost in the worlds masterfully conjured by these comic book creators!

As much as our parents relented to all our whims and fancies for buying comic books over the years, when it came to pursuing comic book creation as a professional career, the idea was met with downright dismissal.

There were, however, some unique individuals chose to defy this opposition and persist till their dreams became a reality. One such person is Rahil Mohsin, a comic book creator from Bengaluru, who has come a long way since the day he decided to create the very thing he loved reading as a book.

We met a very vivacious Rahil during the Bengaluru ComicCon, held in the Garden city recently. He was quite happy to share his personal journey as a self-publishing artist and the current scene in India.

So, what led the young man to chose comics creation over every other conventional career choice that parents like their children to follow?

“Being brought up in the nineties, I had access to comics like Amar Chitra Katha, Diamond Comics and Indrajal Comics along with many western comics that were easily available in Bengaluru. An introvert, I began developing an interest in art and would practice by copying drawings from these comics,” he says.

However, there were no dedicated institutions that professionally taught comic book making in India. Undeterred, Rahil decided to take up animation, as this was the closest he could get to his goal.

But college did him no good, as he ended up bunking most of his classes and instead spent time in empty classrooms practising the craft.

“By then, I had already made up my mind to become a professional comic book creator,” he remembers.

In 2010, he started out professionally and began illustrating comics for Sufi Studios, with whom he has published three graphic novels. Things have definitely looked up for Rahil since then, for he has begun self-publishing his projects, in collaboration with international writers about a year back.

But nothing was without a struggle.

“One of the most prominent struggles that an artist faces is that drawing for a living isn’t considered a serious profession. I’ve had my share of being judged for the career choices I’ve made. But this is something that used to bother me earlier on in my career. It’s been eight years now and it’s a pretty long time to develop a thick skin,” he says.

A very important person that Rahil attributes to all his successes in professional life is his wife, Alankrita, who is an artist herself and has worked for several well-known children’s book publishers in India.

“I have known Alankrita for more than a decade now. We were classmates when we first met and went on to become the best of friends and now life partners. We knew exactly how eccentric we were and would help each other out in whatever we had set our minds to. She is an amazing artist and belonging to the same field, we are well averse with the challenges that an artist faces and help each other stay motivated,” Rahil says.

He also adds that had it not been for her unwavering confidence and relentless push, he would have still been an artist-for-hire and would have never thought of venturing into self-publishing or even collaborating with international writers.

“She’s my muse, critic, manager, confidante, psychiatrist and most of all, my best friend,” a doting Rahil shares.

Upon being asked about the role of comic book fests such as ComicCon and Indie Comix Fest in helping young and aspiring comic book creators consider the field as a career option, Rahil affirms that these have indeed helped in creating a platform for local creators and bringing comics to the mainstream audience.

You may also like: Indian Dinosaurs Are Making a Quirky ‘Comeback’, Thanks to This Woman!

“I’d have to say that the current comics scene is gradually gaining momentum. Starting out as a comic book reader, I never imagined that I would one day become a comic creator. I have been making comics for quite some time now and see a steady growth in the audience that helps support the medium. With each passing year we are introduced to a larger audience, who wants to look beyond superhero comics and is interested in original content across various genres,” he shares.

Currently, Rahil is working on a new initiative, ‘Comics over Coffee’, through which he is helping budding artists or creators who are genuinely interested in creating their own content.

It was the need to break the misconception that professional artists are inaccessible, which made him start this pro bono initiative.

“The artistic community in Bengaluru is ever expanding and through my initiative, I hold one-on-one sessions with creators and give them professional feedback and share all the knowledge that I have acquired over the years. It’s a small attempt from my end to try and give back to the community that has given me so much love and support,” he adds.

On a parting note, we ask Rahil about the advice that he would like to give aspiring comic book makers in India. “My only advice would be to go for it! Never ever let what people say affect you and always follow your heart. Work hard and aim to perfect your skill, always help and support other creators, never chase fame but let your work speak for you,” he concludes.

So if you have an unconventional career in mind, recall people like Rahil when the going goes stuff. You never know, your dreams may be just around the corner.

You can reach out to Rahil at rahilmohsin1@gmail.com. To look up his work, click here.