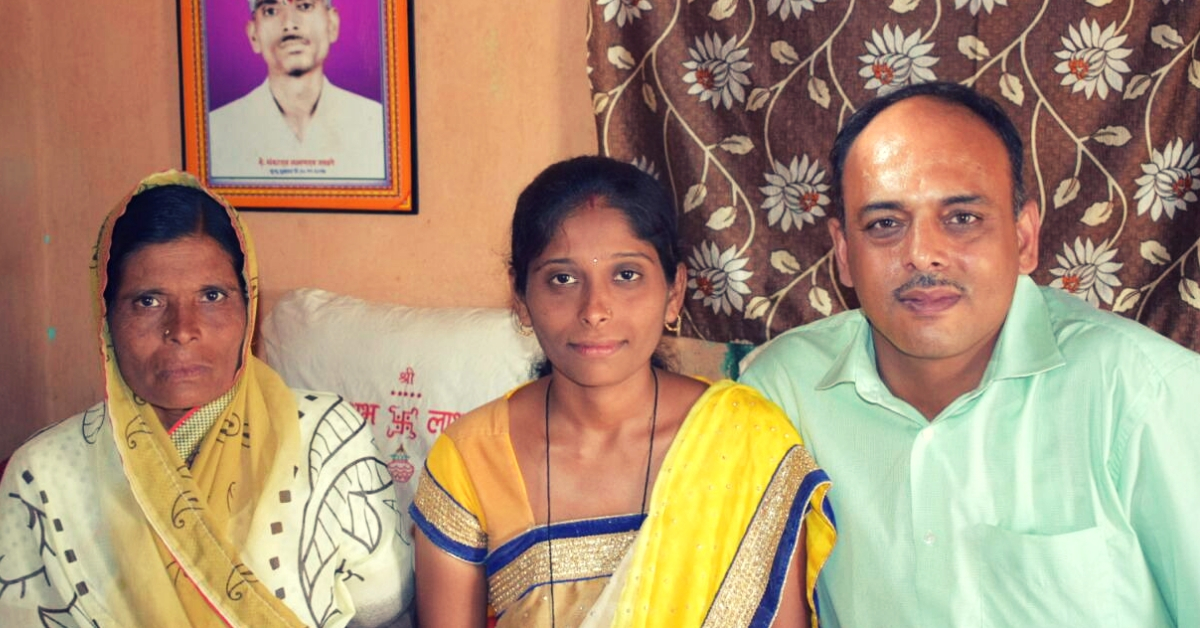 Buried under the debris of seven homes for 108 hours, 18-month-old Pinni was presumed dead, even by her own parents. But Lt Col Sumeet Baxi’s courage gave her a new lease of life!

At the time, Lt Col Sumeet Baxi had been commissioned into the Indian Army, only eight months ago. A second lieutenant, his 8th Bihar regiment was called to Latur for rescue and relief.

As part of the first batch under his company commander, Major (now a retired Colonel) GJS Gill, he travelled for two days until they reached the region.

“Not one structure was standing. Everything was torn down by the impact of the earthquake. Those alive were weeping, running from pillar to post, unsure of whether they would find their loved ones alive or in the mangled mess of the bodies under the debris. They had lost everything—their home, families and even their cattle. Vultures were lurking around. The smell of death was thick in the air.”

The men spent the next three days extricating the bodies—animals, and humans—separately and then cremating and burying them. The bodies and carcasses had started decaying on the third day. With no gloves and masks, the men picked them up with their bare hands until the district authorities made arrangements.

“We were highly prone to infections, but the work could not stop. Most of us were bitten by maggots, and the stink of the decaying bodies was stuck to our nails. It was so strong, we couldn’t eat for days,” says Colonel Baxi.

It happened on the fifth day, 108 hours after the earthquake. Lt Baxi was eating lunch with his jawans at the camp when a middle-aged couple from the village of Mangrul approached him.

“Sir, please help us find our daughter’s body. We just want to complete her final rites,” said the man with tears in his eyes, holding his wife who was weeping uncontrollably.

Five teams had visited the site but couldn’t find the body. The couple’s home was at the base of a small hillock and was buried under the debris of seven more homes and a temple that had crashed on top of it. While the couple had managed to jump out in time, there was no sign of their 18-month-old, Pinni.

Even though his colleagues insisted that he finish his lunch, Lt Baxi decided to go with his gut. The conviction in the parents’ eyes convinced him that he could find the body.

“Our first instinct was to find the iron cot the couple was sleeping on. Underneath the rubble, only one railing of the cot was visible. I pushed the debris aside and tried to dig a small hole. We couldn’t move much with the heavy boulders and debris around us. Finally, we managed to dig an opening through which only a head could fit. My boys tried to slide inside, but there wasn’t enough space. I was about 20 at the time, and lean-bodied, and I volunteered to try.

I kept pushing until I could slither my full body inside. I started reaching out in the dark, trying to get a feel of the things around, when my hand touched a cold body. When I tried to pull it, a weak cough escaped the body. My initial reaction was horror. Nobody including the parents expected the child to have survived after 108 hours! But she was breathing. I pulled her close to my chest to transfer some body-warmth and yelled, “Baccha zinda hai! Baccha zinda hai!” (The child is alive! The child is alive!)

Pinni was a miracle baby.

Turns out underneath the debris of seven homes that fell on the home, was an iron cot. While it lost one of its four legs due to the impact of the earthquake, it still stood thanks to an upturned brass pitcher which supported the cot right where the leg had fallen off, securing it in place. Pinni had rolled underneath it and survived a 108-hour tryst with destiny. She had defeated death.

Lt Baxi was knee-deep in rubble, and as he held Pinni close to his chest, he realised that there wasn’t enough space for both of them to move out. He called out for the jawans to ask for extra help from his company commander and battalion.

But the news that the child was alive spread like wildfire. Even before the company commander could reach the spot, a crowd of 700 villagers had gathered, standing on top of the rubble that the duo was trapped under.

“There was a landslide, and we went deeper again, this time with two more of my jawans. The police and battalion rushed to the spot to control the crowd. After what seemed like an hour-long ordeal they managed to pull the other two jawans out. When they tried to pull me, I told them they would have to dig further to make enough space for both Pinni and me. A miracle had helped her survive for five days; I couldn’t let her die now. And they pulled us out safely.”

The first thing Lt Baxi did after being pulled out was hand over the baby girl to the weeping parents.

“When I handed her over to the mother, they broke down. They just kept thanking me and touching my feet. Emotions overtook us. Watching them cry, I teared up, and my jawans followed. None of us could say anything for a few minutes.”

Lt Baxi recalls how he caressed the baby’s father and said that he was only an instrument, it was a higher power that had saved their Pinni. She was indeed special.

“The moment we came out, there were a lot of foreign-national couples who wanted to adopt Pinni. Even I wanted to. She was deemed the ‘Miracle baby of Latur.’ It was at the time, I named her ‘Priya,’” recalls Baxi.

And while Lt Baxi moved on and got posted to different locations, Priya’s family stayed in touch with him for four years, where they regularly sent him letters and photographs of her.

25 years on, the memories continue to move on with his personal belongings wherever he goes, safely tucked and treasured.

“I knew her family was busy getting rehabilitated and my life moved on. I got married and had a family, and we kept moving every two years due to my postings. And though we lost track, I kept wondering where she was,” says Baxi

When Lt Baxi landed in Pune in 2016, his wife Neera asked him, “Why don’t you try to find the little girl you had rescued?”

The thought nudged at the back of his head, but work took over. The missing puzzle pieces fell in place after a chance conversation he had with his clerk, Dayanand Jadhav.

“He was speaking about building a home in Latur, and I asked him where he was from. When he said Mangrul, my eyes lit up and asked him if he knew Priya or Pinni. ‘The miracle baby? Everyone knows her! How do you know her, Sir?’ He asked me. When I told him I was the man who rescued her, he was shocked.

‘If you had asked me a few days a few days ago, you would have been to attend her wedding!’ he said.

Then, Jadhav immediately got in touch with her over the phone and told her, ‘Priya, the man you have been searching for, for decades is my boss, and he wants to speak to you.’”

The duo met in a reunion fit for books!

“When we met we couldn’t speak for about half an hour. We just wept. Her mother, she and I. Her father had passed a few months ago. But she told us how she had become a teacher at a school her uncle ran. She had kept my photograph from 25 years ago, next to the mandir (altar) she prayed at. From an 18-month-old child under the rubble to a fully grown lady, she is still a miracle child for me.

The disaster from 25 years ago connected us in a bond that will last till I close my eyes. She calls me her father and she indeed is and will always be my first unborn child. She wants to work for her village, and I am very proud of the woman she has become,” he signs off.

If this story inspired you, get in touch with Lt Sumeet Baxi at nbx5771@yahoo.com.