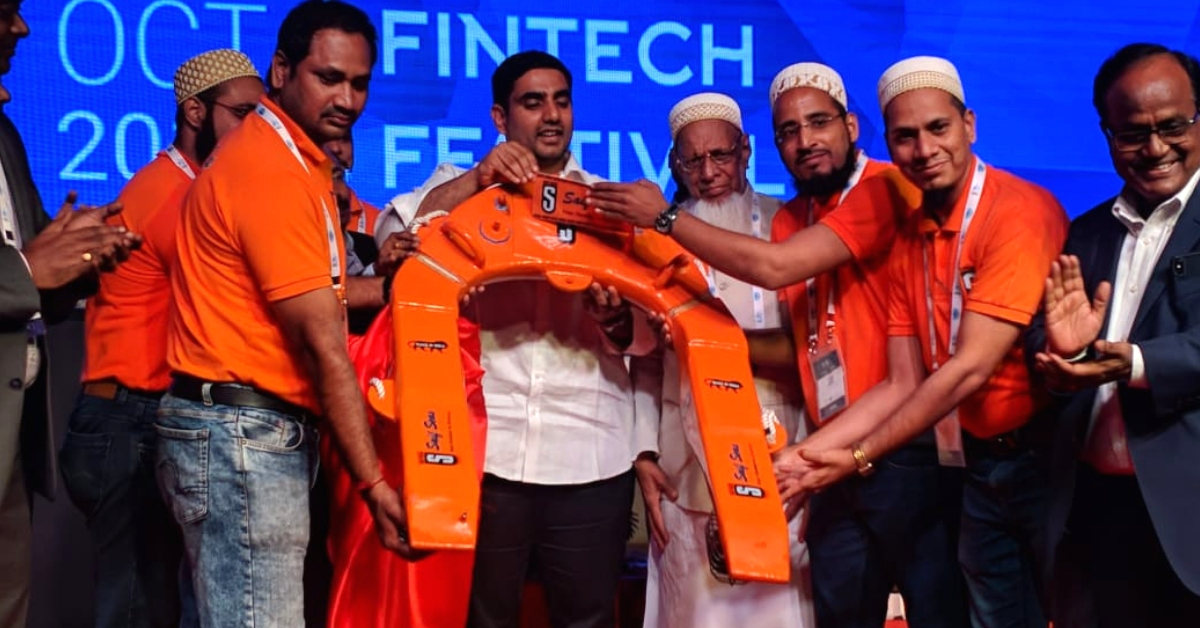 A drowning victim must be ideally reached in three or four minutes. Lifeguards cannot swim this fast in the open seas or in a lake. But the drone can race to the rescue!

A rescue on the high seas, a lake or really any water body – via drone! It sounds like fantasy doesn’t it? But Aliasgar Calcuttawala is making it happen!

A 40-year-old mechatronics engineer, Aliasgar is the co-founder of Saif Automations along with his brother Taher Ahmed Calcuttawala and father Ahmed S Abdeally.

Just incorporated earlier this year, the idea for Saif Automations and their water drone called Saif Seas came during a discussion on news reports describing a spate of drownings along Visakhapatnam’s coastline.

“During a family discussion on the subject in early August 2017, my father, brother and I agreed that instead of sending a swimmer into the sea to rescue people, a small vehicle could do the job,” says Aliasgar, speaking to The Better India.

Starting from ‘Ground Zero’ so to speak, Saif Automations has developed – in less than a year – a model drone that one could deploy in emergencies at sea or in other water bodies. The goal is to mitigate the number of drowning incidents.

Of course, having a father who has worked in the marine, shipping and steel industry for over 57 years has greatly helped matters in envisioning this venture.

But Aliasgar is also a good fit for the job. A mechanical engineer by trade, he worked in Bharat Electronics Limited between 2001 and 2004.

After his stint there, he went for his Master’s degree in mechatronics (a multidisciplinary field of engineering that includes mechanical engineering, robotics, electronics, computer engineering, systems engineering and telecommunications) to the University of Siegen in Germany.

Following his post-graduation, he began working with his father Ahmed S Abdeally and brother Taher Ahmed Calcuttawala in the family company, which services clients in the marine industry based out of Kolkata.

In 2008, they opened a branch in Vizag under the banner of EAC Marine Private Limited, where they do ship repair and fabrication work for clients like the Indian Navy, Indian Coast Guard and private vessels.

Work on Saif Seas began in September 2017. How does this water drone work?

“You can deploy Saif Seas drones from land or sea. Weighing 12 kg, it’s remote controlled within a radio communication range of 3km.

With the help of a remote, you can move it forwards and backwards. There is a belt attached to the drone craft which will bring someone who is drowning back to shore.

These Saif Seas drones have high-powered batteries and can endure continuous use up to 1.5 hours and eight hours of GPS tracking,” says Aliasgar.

“This is an industry-grade drone. A standard rescue operation for someone who is drowning doesn’t take more than three-four minutes. If you can’t reach them in that time frame, the person is lost. Once thrown on a water surface, the Saif Seas drones can go at a speed of 7 knots (i.e. 14 metres per second).

No lifeguard can swim this fast. Moreover, there are indicators on the remote to check battery levels that will help you to find out how much time you have for a particular operation, what the drone craft’s internal temperatures are, etc,” he adds.

The Saif Seas can hold a single person weighing 100 kg and pull him/her to shore. If there is more than one person, the drone can help another two-three people stay afloat till help arrives.

“The drone is not dependent on the internet or any tower signal. This is particularly helpful because in the event of a cyclone or earthquake, there will be network issues. We worked on a free radio frequency,” Aliasgar told YourStory in a separate conversation.

Nonetheless, Saif Automations did come across multiple engineering and logistical challenges while making the drone, particularly in the simulation process and developing a water-tight fabric.

“The simulation process gives you the exact forces acting upon the drone. How will it flow over the water, at what speeds, how much drag, how will it work on still water or waves etc. During the testing process, all these facets were simulated.

However, to do a 15-second simulation on a Pentium i7 computer, it takes three days straight. Instead, we used supercomputers since conventional laptops or desktops can’t do the job. Particularly if you want to make changes to the design during simulation.

Amazon gave us supercomputer processing capacity on rent via cloud computing. Spending lakhs, we did over hundreds of hours of calculations. A supercomputer does a 1-minute simulation in eight hours. That helped us a lot,” says Aliasggar, speaking to The Better India.

For fabrication, they used fibre reinforced plastic (FRP), which is used in the manufacturing of modern lifeboats, yachts, etc.

Assistance for developing this fabric came from friends in the shipping industry. The major challenge was making it 100% watertight. After much work and extensive pressure testing, they have only just managed to ensure that water does not seep in.

“We developed our first model in May 2018 after months of testing and simulations. The family firm took care of financing the entire venture, but help has also come from the Andhra Pradesh Innovation Society, which last month took the initiative of incubating this startup.

They have been very supportive of our venture. It is a user-friendly incubation centre, with little to no constraints. They have helped us in establishing contact with the Andhra government, local municipalities, beach, dam and water authorities,” says Aliasgar.

On the subject of pricing, however, some modalities need to be worked out, and thus they were unable to share a firm price with The Better India.

They will roll out their first unit in the market by the end of November, and within the first year of operations will look to sell 500 units.

With assistance from the National Research Development Corporation, a public sector enterprise under the Ministry of Science and Technology, Saif Automations has even applied for a patent.

However, the startup isn’t just designing rescue drones. They have even developed a model with the added feature of a joystick on the craft that tourists could employ.

Besides tourism and rescue operations, the firm has developed 12 different models for the drone.

Having said that, the firm is looking for assistance from other private players to assist in the manufacturing and marketing of these drones. The potential of these new kinds of drones in the Indian market is massive, and this is just the start.

If you want to reach out to Saif Automations, write an email to contact@saifseas.com or contact Mr Aliasgar Calcuttawala at 9393075192.